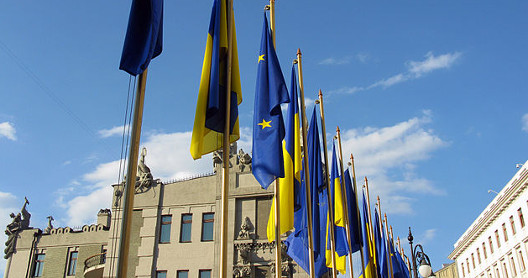 The European Parliament on September 12 called on Russia to respect the right of EU Eastern Partnership members such as Ukraine to enter Association Agreements and not use trade sanctions, forcing them to choose the Eurasian over the European Union. The trade war is music to the ears of the authoritarian Ukrainian authorities who have been trying to convince the EU to ignore their democratic failings and instead focus on Ukraine’s geopolitical importance to Europe.

On September 20, the EU will decide whether it should sign the Association Agreement with Ukraine at a summit to be held in two months’ time in Vilnius, capital of Lithuania. The EU should judge Eastern Partnership countries on their adherence to democratic rights – not geopolitics.

President Viktor Yanukovych is not choosing the European over the Eurasian Union because of an ideological desire to “return to Europe,” as was the case in Eastern Europe and the three Baltic states in the 1990s. His “Euro-pragmatism” is born out of personal frustration with Russian President Vladimir Putin’s disrespect for him and, as Yanukovych said this month, Moscow’s deceit over the April 2010 Kharkiv Accords.

It would be wrong for the EU to ignore Ukraine’s numerous democratic failings and play into Russia’s geopolitical game. Ukraine has not shown a commitment to meeting any of the EU’s benchmarks, including an end to selective use of justice, the end of which would mean the release of Yulia Tymoshenko, leader of the Fatherland political party which has observer status in the center-right European People’s Party. In addition, Ukraine has not shown adequate commitment to include judicial and electoral reforms.

The failure to meet the EU’s democratic benchmarks is a product of Ukraine’s exaggerated sense of its geopolitical importance which Russia’s trade war has deepened. Poland and the three Baltic states which border Russia, perhaps understandably, have also backed the geopolitical rationale not wishing to see Ukraine join Putin’s Eurasian Union.

Germany though, is right to argue that the EU cannot sign such an important document with Ukraine as long as political opponents are put in jail. Germany has stated it would only support the signing of the Association Agreement if Tymoshenko is permitted to travel for medical treatment abroad and given the right to participate in politics. This would include the right to run for president in 2015. Yanukovych very much fears Tymoshenko running for office, which is why, as Yanukovych officials have told the Levyi Bereg Ukrainian newspaper, she will not be released until after the 2015 elections.

The European Council of Human Rights recently condemned Tymoshenko’s imprisonment during her trial (a second ruling is pending on her sentence). This month the European Committee for the Prevention of Torture and Inhuman or Degrading Treatment or Punishment (CPT) report concluded that Tymoshenko had been subjected to physical mistreatment in prison.

Political competition and media pluralism are, after all, European values that are at the core of a democracy.

Indeed, Germany, like many EU countries, has been a strong supporter of Ukraine’s European integration through the Eastern Partnership. Nevertheless, Ukraine has failed to meet even the lower demands in “enlargement-light” than those required for full membership.

Ukraine’s media is faced by censorship problems and violent attacks on journalists are growing. Among the six Eastern Partnership countries, only authoritarian countries Belarus and Azerbaijan have worse media records than Ukraine.

The Ukrainian authorities have shown they have no commitment to core democratic values as seen when the OSCE condemned last November’s elections. Meanwhile, elections to the city of Kyiv have been postponed until 2015 because the opposition would win them and there are on-going attempts to remove the front runner, international boxing champion Vitaliy Klitschko, from the 2015 presidential elections. The Femen gender group has been forced to leave Ukraine after its leaders were physically attacked and weapons were planted in its offices.

These are not the actions of a President dedicated to European values. The Germans and other sceptics in the EU are correct to question Ukraine’s right to enter an Association Agreement.

Some Western experts, such as Freedom House President David Kramer and Dr. Alexander Motyl of Rutgers University, continue to argue that the Association Agreement should be signed – even if Tymoshenko remains in jail. Kramer and Motyl believe this should be undertaken in conjunction with European and American sanctions against Ukrainian leaders. Kramer’s policy is, unfortunately, not realistic. Washington and Brussels are wrestling with economic and financial problems, as well as numerous international crisis—Syria, Egypt, Iraq, Iran. Ukraine is simply not a priority and sanctions are not under consideration.

If the signing of the Association Agreement were to go ahead in Vilnius the EU would be undermining the European values it espouses and, with ratification by the EU’s twenty-eight parliaments impossible, it would not advance Ukraine’s European integration. Germany and other EU sceptics are therefore right to focus on Yanukovych’s complete failure to respect European values rather than playing Russia’s geopolitical game.