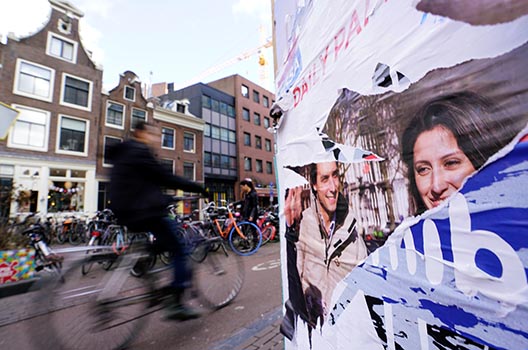 Populist Parties Will Gain Despite General Support for European Project

If the five seats currently projected by polls hold, the FvD will likely be tied for the largest party in vote share with Prime Minister Mark Rutte’s People’s Party for Freedom and Democracy (VVD). The FvD and its leader, Thierry Baudet, an author and political theorist, entered politics just three years ago and finished first in the provincial elections in March, as a result holding the most seats in the Dutch Senate.

Over time, Baudet’s aim on European governance is a referendum on the Netherlands’ membership in the European Union (EU), which he views as a set of institutions inconsistent with notions of national sovereignty. While wanting to gauge the effects of Brexit on the United Kingdom, Baudet has stated: “I am ideologically against the EU, against the internal market, against the open borders, against the euro, against the whole thing.”

As things stand, Geert Wilders’ Party for Freedom (PVV), running partially on an anti-Islam and anti-immigration platform, is expected to win two seats in the European Parliament. While polls find dissatisfaction in the Dutch electorate over the benefits of EU membership to the Netherlands, more than 70 percent say they would vote to remain in the EU in the case of a membership referendum.

Also of note are the poor anticipated results of the social democratic Labour Party (PvdA), the party of European Commission Vice President Frans Timmermans. Such a showing will continue a trend for the party, which obtained historically poor results in the last national elections in the Netherlands in 2017. In the most recent polls, the party is expected to win only two seats in the European Parliament, down from three in 2014. Given that Timmermans is the lead candidate for the Party of European Socialists, part of the Progressive Alliance of Socialists and Democrats (S&D) group in the European Parliament, this weakness would be significant, especially as he has ambitions for a significant portfolio in the next European Commission.

As in Germany, and other European countries, it would seem some of the social democrat electorate is moving toward the Greens, which is currently anticipated to place third overall behind the FvD and VVD, and gain three seats, one more than in 2014. The high hopes of the Green parties in Europe at the beginning of the campaign seem, however, to be slowly deflating, even though they will still improve upon their results from 2014.

Centrist Bloc May Be Significantly Weakened

The centrist, EU-supporting bloc composed of VVD, D’66, Christian Democratic Appeal party (CDA), and PvdA will lose significantly if current polls hold. The CDA is anticipated to drop from five seats to two, same as the D’66, a member of the ruling coalition in the Netherlands.

Of the groups in the European Parliament, the Alliance of Liberals and Democrats for Europe (ALDE) looks to be least affected, as the VVD and D’66 will continue to combine for around seven seats. It remains to be seen how effective and strategic the newly elected representatives from existing and new Eurosceptic parties will be once in position, though at the very least they are likely to gain a powerful platform for disruption at both the national and the European level.

Bart Oosterveld is the C. Boyden Gray Fellow on Global Finance and Growth and director of Global Business & Economics Program.