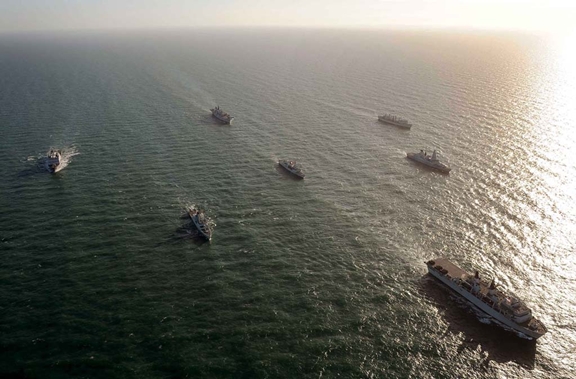 Exercise Joint Warrior 2013 is certainly Europe’s, and possibly the world’s biggest maritime amphibious military exercise this year, and I am having the pleasure to observe and be sea-sick all over it.

Led by the Royal Navy and 3 Commando Brigade, the exercise involves some forty ships from fifteen nations with over forty thousand personnel as part of a Response Force Task Group (RFTG) designed in military-speak for ‘theatre entry’ from the sea.

This is Britain’s global reach maritime amphibious spear-tip which will soon be strengthened immeasurably with the commissioning of the two aircraft carriers HMS Queen Elizabeth and HMS Prince of Wales.   The force affords London reach, flexibility, and political discretion during crises that only the Americans can match.

What key lessons have I learnt from the exercise, not just for the British but all Western states grappling with defense strategy, austerity, and affordability?

Core Message: Britain’s 2015 Strategic Security and Defence Review (SDSR) will fail unless London properly balances ambition, resources, and commitments.  To that end the defense review must look upward and outward at the world and down and dirty into the services to drive efficiencies.  Above all it must have the ambition to answer the seminal question at the very heart of Britain’s strategic defense dilemma: what role does Britain seek to play in the world, why, and with whom?

Next Steps: It is critical that London remains the alternative (to the Americans) coalition force generator and leader of choice as this buys London influence in both capitals and institutions far beyond the simply military domain.  However, London’s systemic short-termism is undermining Britain’s ability to influence key allies and institutions, not least Washington.  This is not just important for the British but also for NATO and the EU.  One Dutch officer admitted to me that neither the Royal Netherlands Navy nor the Royal Netherlands Marine Corps would exist but for their British counterparts.

The Royal Navy’s motto is if you want peace, prepare for war. Thankfully, Britain today does not have to prepare for war. However, in a world full of friction if Britain is to help prevent conflict injurious to its national interests it must think and act strategically.  Therefore, SDSR 2015 must finally look beyond Afghanistan and not simply re-fight it better.  Indeed, the switch from so-called campaigning to contingency operations will make the 2015 review as close to a grand strategic year zero as Britain has known for a century.  It is an opportunity to be seized not squandered.

Let me conclude by thanking the Commodore commanding the exercise together with his staff.  My sincere thanks are also offered to the captains and crews of respectively HMS Bulwark, HNLMS Rotterdam and HMS Westminster and 3 Commando Brigade, for their kind hospitality and for clearing up after me.