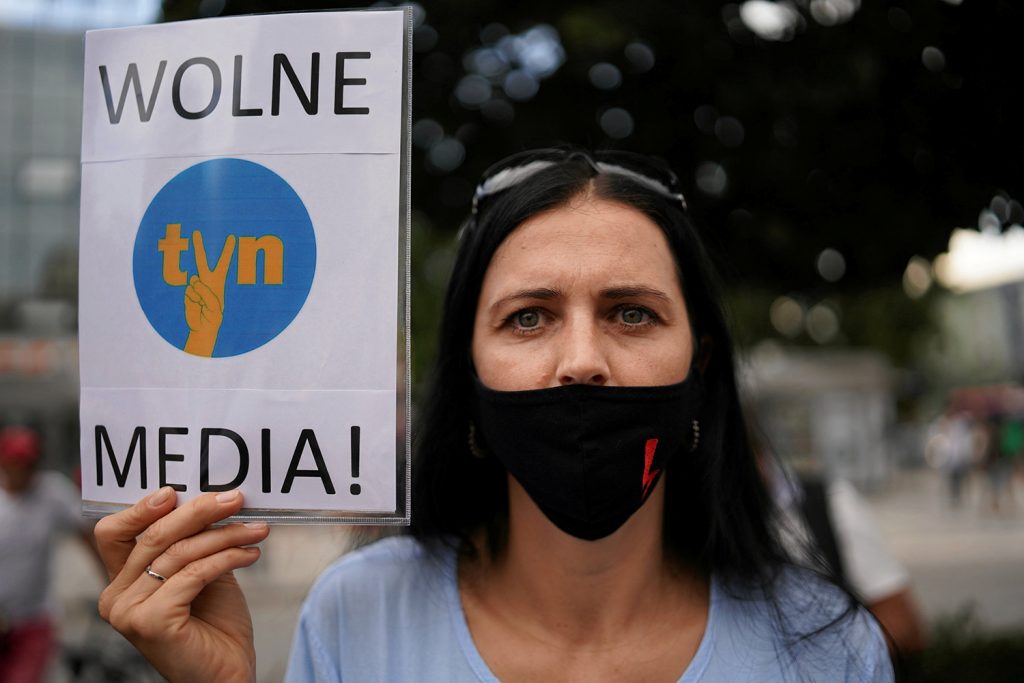 Poland is now the host of an engrossing television drama—with potentially disastrous consequences.

On August 11, the Polish parliament’s lower house, called the Sejm, narrowly (and controversially) passed a bill that prevents non-European companies from holding a 49-percent stake in Polish radio and television stations. Poland’s ruling Law and Justice party has promoted the bill as a mechanism to protect media companies from control by powers like Russia and China.

But all eyes are on Polish television network TVN: Opponents of the bill (dubbed Lex TVN) argue it would force the network’s owner, American company Discovery Inc., to sell off not only one of the largest independent news broadcasters in Poland but the largest US investment in the country. The network’s news channel TVN24, which criticizes the government, is in the process of renewing its broadcasting license—a process that has already been drawn out by Polish broadcasting regulators.

On August 12, Discovery announced it would take legal action against Poland for violating the US-Polish Bilateral Investment Treaty.

The apparent move against TVN fits into a pattern of widely criticized behavior—which also includes squeezing the judiciary and attacking the LGBTQI community—by a country that once served as a leading example of post-communist democracy and growing prosperity.

Following this latest development, our experts outline what it means and what’s next.

The consequences of Lex TVN entering into force would be very negative. The risk of losing investor confidence in Poland will increase because practically overnight, a company that has made huge investments in Poland will be excluded from the market. The law is an attempt to nationalize a private enterprise under the guise of a threat from China, Russia, or Middle Eastern powers—a move typical of authoritarian countries.

Going forward, it is very likely that US companies will think ten times before they invest even a single dollar in Poland. The new law is a warning signal for potential investors even from other countries that investments in Poland come with a high level of risk. And this is a moment when we badly need private investments, including foreign ones. Last year, the private investment in Poland as a share of gross domestic product was the lowest in almost thirty years.

And of course, the new media law will destroy the pluralism of public debate because it will directly hit one of the leading independent TV broadcasters in Poland. Meanwhile, the country needs independent media and stable protections for private property.

Lex TVN is ill-considered. Not only does it damage Poland’s business reputation by attacking the largest US investment in the country, but it also fuels suspicions that the ruling Law and Justice Party is hostile to free media. It contributes to Poland’s estrangement from its greatest ally at a time when the Polish government is also fighting with the European Union over judicial independence. For Warsaw to bicker with its friends seems to be a poor policy at a time when Poland, Europe, and the United States face challenges and even threats from the Kremlin.

After the fall of the Iron Curtain in 1989, Poles made the case that Poland and the rest of newly liberated Central Europe should be brought into Western institutions such as NATO, from which they had been excluded by Moscow. Poles feared being consigned to a gray zone of insecurity. They were right. The United States and Western Europe listened, and the result was a larger and united Europe. Lex TVN and other ill-advised policies risk putting Poland into a new gray zone of political isolation.

A bad outcome can still be avoided. Lex TVN will go to the Polish Senate, which is controlled by the liberal opposition. The Senate is likely to reject or amend the bill and send it back to the Sejm, the lower house of parliament. Poland’s ruling coalition may be able to put together a majority to pass the bill but has little room to spare.

Jarosław Kaczyński, the political leader of Poland’s principal ruling party, saved his coalition by winning the Lex TVN vote. Now he has the chance to find a way forward at less cost to his country. Some in the Polish government have argued that their real intent is to protect Polish media from Russian and Chinese control. If so, they can probably fix Lex TVN to that end.

Daniel Fried, Weiser Family distinguished fellow at the Atlantic Council and former US ambassador to Poland.

Poland and the United States: What’s right, what’s not, and what’s next

Around the time of President Joe Biden’s first trip to Europe in June 2021, US-Polish relations experienced a short, but intense, rough patch. Both the United States and Poland need to look hard at what this relationship can do for both countries and for the transatlantic relationship, and at the sources of problems.

Image: A protester holds a placard reading "Free media!" during a demonstration in defence of media freedom and against a proposed amendment to the country's broadcast media law regarding the share of foreign capital in Polish media, in Czestochowa, Poland on August 10, 2021. Photo via Grzegorz Skowronek/Agencja Gazeta/via REUTERS.