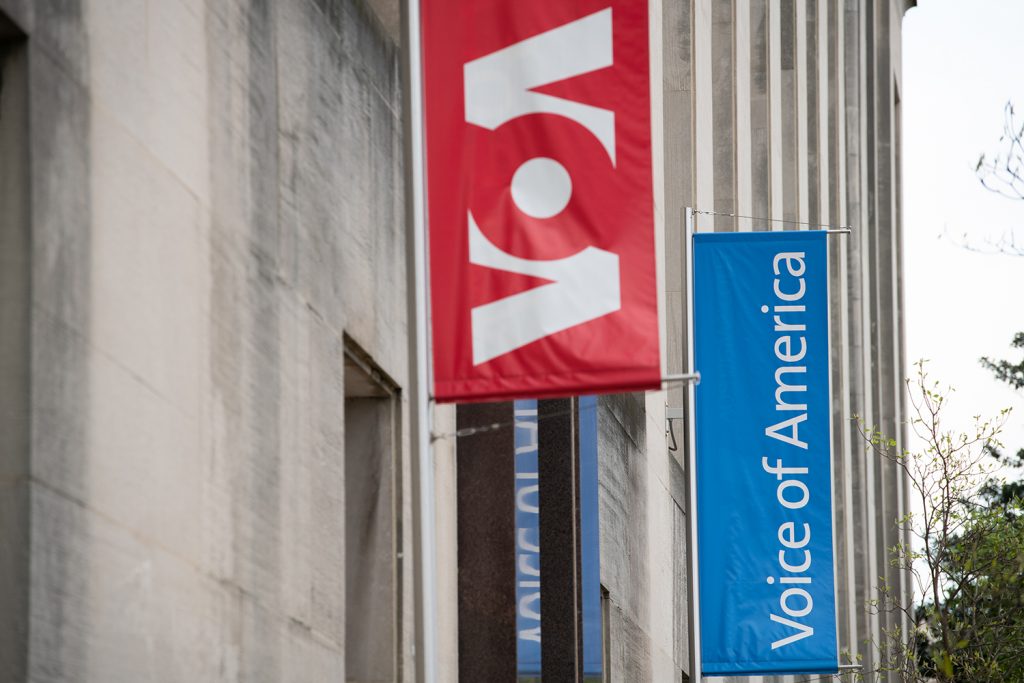 A government threatening the independence of journalists is the kind of story Voice of America (VOA) used to cover. Now VOA is on the other end of the sword.

This past week, Michael Pack, the new CEO of the US Agency for Global Media (USAGM), dismissed the leadership of Radio Free Europe/Radio Liberty (RFE/RL), Radio Free Asia, the Office of Cuba Broadcasting, and the Middle East Broadcasting Networks. In anticipation of the move, the director and deputy director of VOA both resigned. Together, these networks reach 350 million people around the world each week.

From the 1940s until today, every US administration has understood that there is an editorial firewall between the management of these agencies and the journalism they produce. The firewall may now be crumbling before our eyes.

It’s important to understand how US international civilian broadcasting works. These outlets are funded by the US taxpayer and do not come cheap. The annual total budget is over $600 million. What do Americans get in return for their investment? In the early days, the answer was clear. VOA was founded in 1942 as the legendary journalist William Hale came on the air, in German, and said, “We shall speak to you about America and the war. The news may be good or bad. We shall tell you the truth.”

That was the ideal and pretty much the practice.

During the Cold War, both VOA and RFE penetrated the fog of communist propaganda to reach people behind the Iron Curtain. These were the days when Edward R. Murrow was in charge, which gives you a sense of the prestige and credibility of these outlets. The stories from those years weren’t just about US politics; they presented an alternative way of life. VOA was the voice not only of freedom but also of prosperity, of creativity, of ingenuity. It gave the world the sounds of Dizzy Gillespie and the stories of Walt Disney.

RFE and RL were different: Their mission was to act as a domestic free press for communist countries that didn’t have one. They hired refugees from Nazism and communism—real-life versions of those who, in the movie Casablanca, sang the Marseillaise in Rick’s Café. Those such as Jan Nowak-Jezioranski, an economics student in pre-war Poland, a courier between the Polish underground and the Polish government in exile, and the head of RFE’s Polish service for twenty-five years. When Jan Nowak met Pope John Paul II, he started to introduce himself only to be informed that introductions wouldn’t be necessary. As archbishop of Krakow, the pope had listened to Nowak every morning while shaving.

For dissidents in communist countries, the American radio stations (and the BBC) were a window to the outside world. On these airwaves, they learned of John F. Kennedy’s “Ich bin ein Berliner” speech, of Ronald Reagan’s affirmation that the Soviet Union was an evil empire, of the rise of Poland’s Solidarity movement and the decay of communism. The broadcasts gave them hope and confidence in America and in democracy. The US military and NATO may have defended Europe against Soviet armies during the Cold War, but freedom advanced via the radio, transmitted to people who demanded freedom and eventually got it.

Keeping US government broadcasting free of propagandistic taint didn’t come easy. To be credible, the stations couldn’t duck the hard questions that roiled America and the world. They covered the hard stuff: racial injustice, urban riots, economic inequality, and American foreign-policy failures such as the Vietnam War and the Iran hostage crisis. And sure, sometimes someone in the White House or the State Department would suddenly pay attention to this half-a-billion-dollar agency and say, Wait a second, is criticizing the US a good use of our money? But the norms and principles at the heart of VOA and RFE/RL held: The White House and US State Department didn’t always like the stories these organizations produced, but the stories kept coming.

We know this from personal experience. Dan Fried worked on Soviet and Polish affairs at the State Department in the late 1980s (and had plenty of conversations with RFE’s Munich headquarters). Josh Lipsky was the State Department’s staff liaison to the Broadcasting Board Governors (BBG), VOA and RFE/RL’s oversight body, from 2015 to 2017. Josh was involved in the Obama administration’s effort to craft a new plan, with bipartisan congressional support, to modernize the networks. That plan called for US government media to be run by a Senate-confirmed CEO rather than the BBG. The editorial firewall would stay in place, but a strong manager would prepare the agency for the 21st-century, digital-first media landscape.

The plan made sense, in theory. But it assumed that the next administration would never nominate (and the Senate would never confirm) someone who didn’t believe in the journalistic independence of the organization.

That seems to be what’s happened. Michael Pack has collaborated on several film projects with Steve Bannon, the former adviser to US President Donald J. Trump and executive chairman of Breitbart News. In 2018, Bannon accused VOA of being controlled by the “deep state.” This past April, the White House accused VOA of speaking for America’s adversaries and amplifying Chinese propaganda. (VOA denied the charge, stating that it was reporting factually on disinformation campaigns by China Russia, and Iran.) This spring, Pack’s long-stalled nomination was finally pushed through the Senate.

Pack argues that he is simply aiming to rejuvenate the institutions he’s overseeing as US foes escalate their propaganda efforts. But rather than tread lightly during his first weeks on the job, he swept in and removed leadership approved by Republicans and Democrats. The purge has shocked the rank and file in these organizations, and for good reason. No prior leader has shown up and immediately replaced the public servants who run these news agencies. Those public servants have certainly never been all forced out at once. Reform is one thing. This feels like a hostile takeover.

But if Pack’s plan is to try and shift the editorial direction of these organizations, he may be in for a surprise. First, by law, USAGM has to direct its communications to overseas audiences, not domestic ones. Second, the dedicated journalists at these networks are not going to change their coverage choices because of new leadership. They’d rather resign, as VOA Director Amanda Bennett just did. Third, it will not be easy to start new projects in any of these networks, especially any with a partisan political edge. Nearly every major initiative within the bureaucracy goes through congressional review. Given the reckless way the new leadership has handled its first week at the helm, you can be sure Congress is carefully watching these developments. There are fierce defenders of US international media independence on both sides of the aisle.

There is another threat though. It’s about where money is not spent. One of the most successful projects over the past decade has been Current Time, a twenty-four-hour Russian-language TV network created by RFE that regularly attracts millions of viewers online and on television throughout Russia and among Russian speakers in nearby countries. It’s a 21st-century way of getting past Russian President Vladimir Putin’s wall of propaganda.

Imagine Putin asking Trump to defund the project at their next summit. In the past, no White House would direct how RFE spent its money. But now, after this past week’s spate of firings and resignations, it’s easier to see how the already blurred lines between the US government and US government-sponsored media could be erased.

If such scenarios were to materialize, then one of the most effective tools for explaining America and its best values to the world would vanish. There’s no doubt that US international media needs reform and reinvention. But shattering the independence of the networks under the guise of saving them would only backfire. One lesson learned in the Cold War: Don’t become them to fight them. Yes, the United States is confronting an array of challenges from its authoritarian adversaries. But you don’t advance freedom by dismantling free institutions or a free press. You advance it by empowering them.

Josh Lipsky is the director, programs and policy, of the Atlantic Council Global Business and Economics Center. From 2015-2017 he served in the State Department and was the department’s liaison to Voice of America, Radio Free Europe/Radio Liberty, Middle East Broadcasting Networks, Radio Free Asia, and the Office of Cuba Broadcasting.

During the Digital Forensic Research Lab’s 360/OS event in June 2018, Ressa described The Philippines, which has some of the highest rates of social-media usage in the world, as “patient zero in the fight [over] fake news.”

Another source of reliable information for the Russian public is under threat at a time when it’s more needed than ever, with the country looking down the barrel at another sixteen years of Putin’s strongman rule.

Image: A general view of the Voice of America (VOA) headquarters in Washington, D.C. on Wednesday, April 15, 2020 amid the Coronavirus pandemic. (Graeme Sloan/Sipa USA)