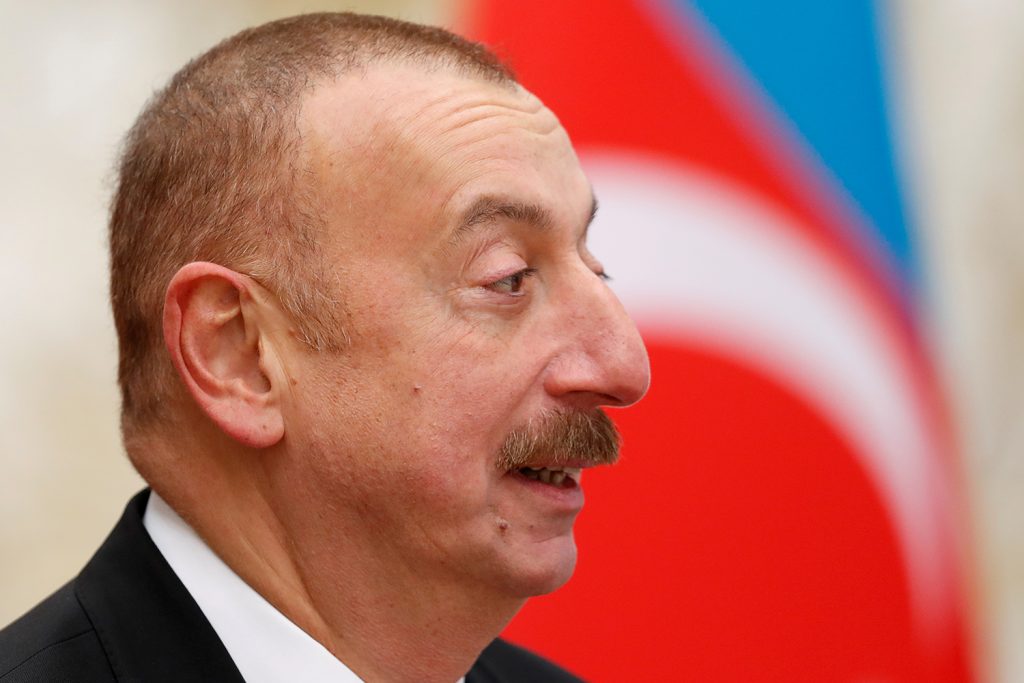 While many countries are scrambling to protect the public from COVID-19, authorities in Azerbaijan are using the virus as a pretext to continue their harassment of opposition groups like the D18 Movement (D18).

On March 8, Azerbaijani journalist Tezekhan Mirelemli started live broadcasting from D18’s Baku office as police officers ordered the office closed, saying that the activists could not “gather en masse” due to fears of spreading the novel coronavirus. There were only four people in the office at the time and officers refused to provide a court order or other documentation for the closure.

This is nothing new for Azerbaijan. As elections approached in February, police detained opposition leaders in Baku— including D18’s leader Ruslan Izzatli—drove them hours outside of town, and left them in the middle of nowhere. Izzatli, who was himself running for parliament when he was detained, is threatening to sue the interior ministry.

Alex Rafouglu, an Azerbaijani-American journalist who also serves as Amnesty USA’s country specialist on Azerbaijan and Georgia told me that “it looks like the government is trying to take personal revenge and using every opportunity, including disasters like coronavirus, to silence these critics.”

Taking advantage of a deadly global pandemic to harass opposition groups may seem like blatant opportunism—and it is—but it’s also ordinary behavior for the Azerbaijani government. In 2014, the opposition Popular Front party accused the government of causing an explosion in their office. The government denied the accusations, and quickly moved to demolish the building on grounds that it wasn’t safe.

“It’s really cheap and easy to go after a group like D18, especially under the guise of public health. They can probably go after them like this without facing a big public backlash,” Elspeth Suthers, a senior program officer for Eurasia at the National Endowment for Democracy, told me.

Azerbaijan’s government has increasingly been flexing its authoritarian muscles as civil society and political groups like D18 try to increase civic and political participation in the country. “An organization like D18 is well positioned to help young people make the transition from…cleaning up beaches, to thinking about voting rights and observing elections and maybe even running for office one day,” Suthers said. “That would put them on the government’s radar as a potential threat.”

The world is grappling with a global crisis, and public trust in government is critical to public health tactics like self-isolation. Individual responsibility is proving to be critical for mitigating the virus, especially in countries where the pandemic is still in the early stages of spreading. People must be able to trust that when their government and health experts advise them to take certain precautions, the authorities have the best interests of the public in mind and take the threat seriously. If people doubt what they hear or do not take it seriously, they are far more likely to take unnecessary risks and make the pandemic worse.

So far, Azerbaijan only has thirty-four cases of COVID-19 confirmed, but the government is squandering what little credibility it has. If Baku starts to see the same levels of transmission in other world capitals, they will have to start minimizing public gatherings, closing restaurants, and asking people to quarantine themselves. What happens if Azerbaijanis interpret public health decrees from their government as just another meaningless political tool, or assume ulterior motives?

To some, trust in government has been eroded by acts like the D18 office shutdown. “I think everyone following this story understands that if you’re trying to shut down public gatherings and offices to fight coronavirus, why would you go after one specific opposition group?” asks Raufoglu. “When government offices and schools are still open, that is not consistent with your policy and your messaging.”

Azerbaijani President Ilham Aliyev still maintains his grip over the country despite a cascade of threats to his legitimacy—accusations of paying off European politicians with a slush fund, vocal international criticism of its sham elections last month, and now a tumbling economy as the Russia-Saudi Arabia oil standoff plunges prices. As an authoritarian ruler, Aliyev will likely weather the storm. The coronavirus pandemic, however, is showing just how reliant we are on the actions of each government. What happens in one place affects us all. If an unmitigated outbreak occurs in Azerbaijan, it will not stay in Azerbaijan.

For its own good, the global community needs to act in defense of Azerbaijanis, first by calling out what is happening in Baku but then by going further.

Groups like D18 are pushing for an Azerbaijan that is more open and inclusive. They want Azerbaijan’s government to move past the corrupt post-Soviet shell Aliyev is trying to preserve—and at a time when the world faces a global pandemic, Soviet-style opaqueness and unnecessary harassment only makes people more likely to ignore critical public health recommendations.

On March 19, Aliyev openly threatened to “isolate” his political enemies during this crisis. “A state of emergency might be declared sometime,” he said in a statement. “In this case, isolation of the representatives of this fifth column will become a historical necessity… We cannot allow the anti-Azerbaijani forces, the fifth column, national traitors, taking advantage of this situation, to commit any provocation.” The world’s attention is focused on combating COVID-19 right now, but the way authoritarians use the crisis to consolidate power cannot be ignored.

The impact of coronavirus on Gulf economies

Beyond the obvious public health crisis, the coronavirus has had a significant impact on Gulf economies, as it has with other countries around the world. What sets the GCC states apart is the damage that can be done by a Chinese slowdown.