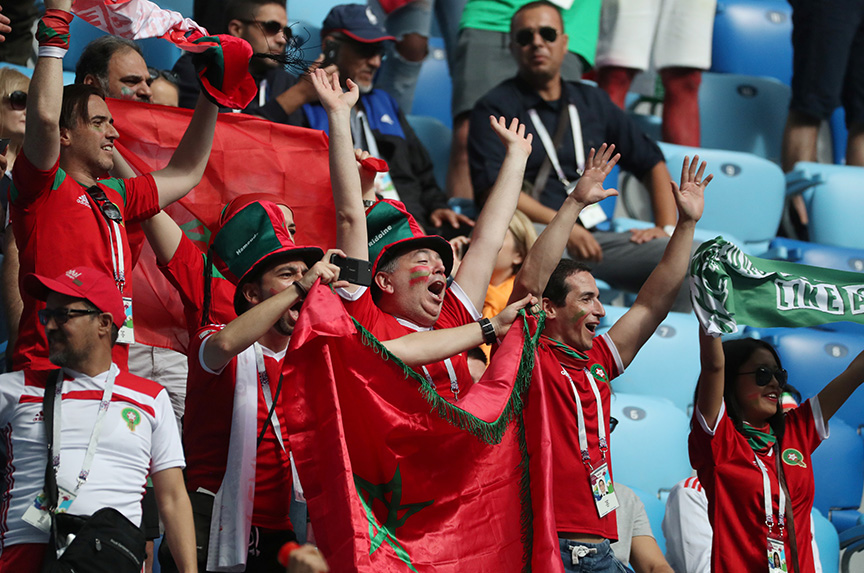 From now until July 15, one million soccer fans will descend on Russia for the twenty-first Fédération Internationale de Football Association (FIFA) World Cup, 3.4 billion people will watch from virtually every country and territory on Earth, and Russia will profit from immense global attention, an economic boon, and the fame that comes from hosting the premier mega-event.

Such reach puts a great deal of power and influence in the hands of soccer’s global governing body. While FIFA has long used its influence to encourage governments to make the quadrennial tournament safer, more profitable, and more successful, its relative inaction in protecting and advancing fundamental human rights—specifically those of the lesbian, gay, bisexual, transgender, and/or intersex (LGBTI) community—around this year’s World Cup is disappointing.

As Americans, alongside Mexicans and Canadians, prepare for an even bigger World Cup in 2026, they should hold FIFA to a higher standard on host countries’ human rights records and insist that the Federation take decisive actions to ensure tournaments are inclusive, inviting, and safe for all.

Playing in a homophobic environment

Russia has long been considered unsafe for the LGBTI community; homosexuality was only decriminalized in 1993 and declassified as a mental illness in 1999. In a travel advisory directed at American soccer tourists, the State Department warned of Russia’s infamous anti-gay “propaganda” law, which aims to shield children from homonormativity, penalizing LGBTI advocacy and creating a dangerous climate of hate. Homophobic hate crimes in Russia have doubled since the State Duma unanimously passed and enacted the law in 2013.

In some parts of Russia, including the federal republic of Chechnya (where Egypt’s soccer team will train), the stigma is even worse. In 2017, there were reports that Chechen government officials had entrapped and tortured over one hundred gay men. With the assistance of the Russian LGBT Network, an interregional non-governmental organization that promotes equal rights regardless of sexual orientation and gender identity, more than 106 victims have obtained asylum overseas. However, no criminal cases have been filed and a formal Russian Ministry of Justice investigation found no evidence of abuse or members of the LGBTI community in Chechnya. “Please help us find them,” said Russian Justice Minister Alexander Konovalov at the United Nations.

While FIFA and the Russian Football Union have attempted to assuage worries, stating that LGBTI fans are exempt from Russia’s laws and welcome to express themselves, the Federation’s inaction in responding to fans’ concerns is unacceptable and sets a poor precedent.

Too little too late?

Following criticism over Russia’s selection as the 2018 host, FIFA has taken steps to improve respect for human rights in all its operations. In March 2017, it established an independent Human Rights Advisory Board to monitor the implementation of its human rights commitments. That same year, FIFA introduced a policy detailing the minimum human rights standards required for host countries, pushing for a discrimination-free environment overall.

Prior to the 2018 World Cup, the Federation, in collaboration with Football Against Racism in Europe (FARE), established “a dedicated anti-discrimination monitoring system” that assigns three observers to each match and allows referees to stop, suspend, or even abandon a game due to discriminatory behavior in stadiums, which is reportedly escalating in Russia. FIFA also distributed a ninety-four-page good practice guide to its member associations and issued several official statements acknowledging and responding to concerns of fans around the world.

However, many feel the Federation’s approach has been lackluster, particularly in responding to LGBTI concerns. While the abovementioned policies are positive developments, many fans struggle to envision their effectiveness in practice.

The Russian government’s messaging hasn’t helped; while the Football Union announced that fans will not be fined for expressing their feelings or displaying LGBTI symbols, the thousands of Cossacks deployed for security will reportedly be watching for same-sex displays of affection during the tournament. The brutal attack on a French couple and arrest of a British activist on day one of the mega-event suggest any semblance of tolerance and security FIFA and the Russian government were trying to convey is quickly falling to pieces.

Anti-gay laws give anti-gay prejudice a semblance of government support in Russia. FIFA had over five years after the passing of Russia’s “propaganda” laws to push the government to ensure a safe space, with many hoping the tournament would serve as a catalyst for countrywide improvements for the LGBTI community. The soccer Federation, with its immense reach and mind-boggling cashflow, has the power and influence to instigate real change. On several occasions, FIFA has even suspended countries’ laws, rights, and freedoms to make tournaments successful. LGBTI soccer fans needed similar decisive actions to be taken in response to Russia’s homophobic legislation, but FIFA failed to deliver. At best, FIFA’s actions will prop up a facade of inclusiveness that will undoubtedly crack after the closing ceremonies.

Is FIFA above the law?

Ahead of the 2010 FIFA World Cup, South Africa suspended some of its constitutional rights, renovating stadiums to ensure the sale of only FIFA-approved products and establishing fifty-six FIFA World Cup courts, which held jurisdiction over all crimes arising from the tournament and streamlined judicial proceedings.

Ahead of the 2014 FIFA World Cup, FIFA lobbied host country Brazil to overturn legislation banning beer sales in stadiums, arguing that alcoholic drinks are part of the experience and their sale and consumption is nonnegotiable.

This go around, FIFA negotiated its way around Russia’s expensive and complicated visa process, persuading the government to accept World Cup tickets as travel visas for much of June and July.

As the temporary suspension of laws, constitutional rights, and fundamental freedoms is usually reserved for times of war or national emergency, FIFA’s ability to lobby countries to trade away a portion of their sovereignty is truly remarkable. Why then has the Federation not done more to protect members of the LGBTI community attending 2018 FIFA World Cup?

What does the future hold?

Much like FIFA has struggled to assure LGBTI fans of their safety at this year’s competition, so too has the Federation failed to send a clear message to potential host countries that hosting a major tournament is contingent upon the reform of anti-LGBTI laws and other policies that contradict FIFA’s human rights standards.

Last year, Egypt was picked to host the Africa U-23 Cup of Nations in 2019, the third edition of the Confederation of African Football’s championship, much to the disappointment of many human rights activists. Egypt has witnessed a vicious anti-gay campaign, with the LGBTI community targeted in a wave of more than fifty arrests and violence last year. News of the U-23 Cup’s host broke two months before the Egyptian parliament began drafting a bill criminalizing homosexuality and the display of LGBTI symbols. With policies in direct opposition to FIFA’s human rights statutes, it is hard to see how the Federation could ensure the safety of athletes and their supporters in Egypt and fail to understand why it isn’t standing by its commitments. Without vigorous intervention, FIFA will lose the support of LGBTI people and allies alike, and its alleged commitment to these issues will be discredited.

Of the nineteenth FIFA World Cup in South Africa, Nelson Mandela famously said that sport “laughs in the face of all types of discrimination,” and, “create[s] hope, where once there was only despair.” Sadly, without vigorous intervention and a watchful eye from soccer’s global governing body, the same will not be said about the twenty-first FIFA World Cup in Russia.