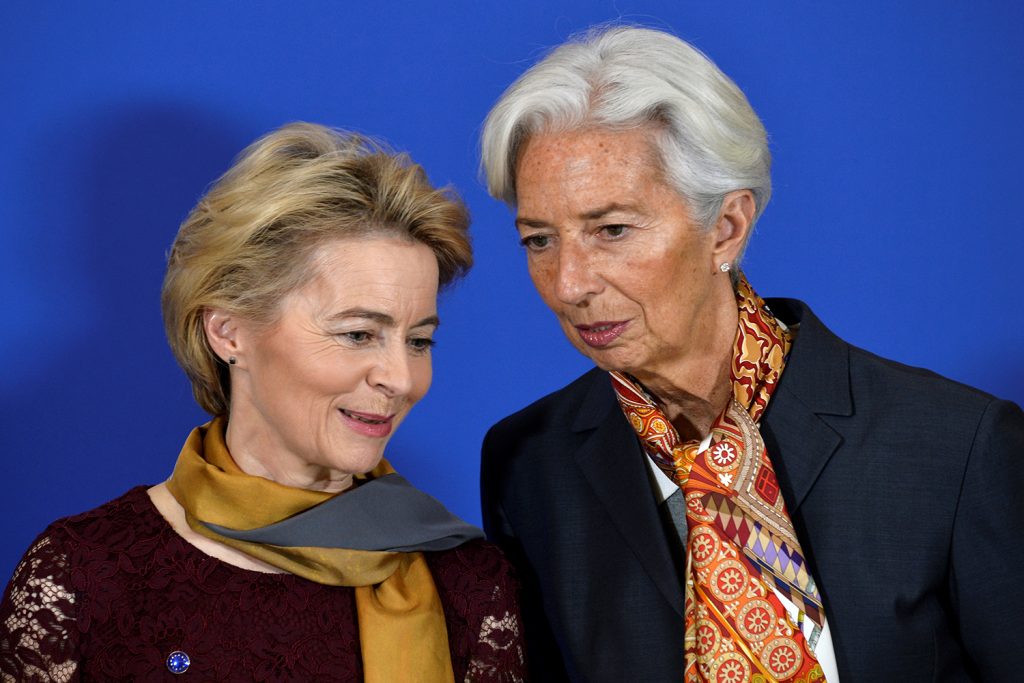 European Union government leaders on April 23 achieved only the bare minimum agreement on their response to the coronavirus crisis and postponed key decisions to later in the year. As a result, there is now a distinct risk that financial market pressures will determine the policy agenda and speed of decision-making in Europe over the next few months.

German Chancellor Angela Merkel and European Central Bank (EBC) President Christine Lagarde, who were both at the table during the European debt crisis, have made statements and implemented measures in recent weeks reflecting their desire to avoid the experience from the time when yields, downgrades, and other financial market dynamics drove the timeline and scope of major economic policy decisions.

The European Council on April 23 approved the 540 billion euro package of measures developed by the Eurogroup of finance ministers, which features liquidity lines up to 2 percent of a member state’s gross domestic product for coronavirus-related spending from the European Stability Mechanism (ESM) and increased lending to small and medium enterprises through by the European Investment Bank, among other things. A high-level dialogue within the EU about the next phase of the response continues and EU Commission President Ursula von der Leyen is due to present proposals in mid-May.

Pressure from populist parties limits the room to maneuver of several participants. For example, it is unlikely that a heavily pandemic-affected country like Italy will actually use the ESM liquidity given the perception that it would lead to the ECB and EU dictating domestic policy. Similarly, the Dutch ruling coalition faces a mirror electoral threat if it were at this point to succumb to pressure to agree to joint debt issuance in the short term.

Decisions reached about the EU budget and funding of the economic recovery must thread this needle to avoid a renewed rise to power of parties not supportive of the European project. The euro area’s economies are open, deeply integrated, and interdependent through trade and financial stability channels: there is a collective interest in a robust joint economic recovery. To that end, fiscal transfers to the member states most affected are needed and should not lead to additional increases in their debt burden.

The ultimate Recovery Fund will likely be in the order of magnitude of 1 trillion Euros, and will probably be funded by a combination of increased headroom in the EU budget (which would allow the EU to issue additional debt in the capital markets) and a reframing and upsizing of the EU’s seven-year Multiannual Financial Framework with a strong link to the Recovery Fund for oversight and management within existing EU institutions. Other funding options being discussed, including common debt issuance in the form of ‘Coronabonds’ or perpetual bonds, appear very unlikely.

There are good, and longstanding, arguments for common debt issuance by euro area countries: it would eliminate correlated risk perceptions of euro area sovereigns and banks in capital markets, for one, so that yield pressure on one member does not lead to contagion effects. A euro-denominated safe asset would also bolster an expanded international role for the euro and create an ability for the EU to conduct a foreign policy less constrained by the global importance of the US dollar. However, the suggestion that common debt issuance is the only solution for the current set of policy challenges is disingenuous and factually incorrect. The abuse of the pandemic to advance joint debt issuance also hardens political attitudes across the spectrum in those countries historically opposed to the idea.

As the next phase of the response is designed and implemented against the backdrop of a sharp economic contraction, the role of the ECB is critical to reduce market liquidity risk for euro area sovereigns and banks. Last week, it took a critical step by grandfathering in bond ratings as of April 7. In short it means that were Italy to be downgraded to speculative grade by a rating agency, its debt remains eligible for collateral. Given the country’s high debt load and the significant holdings of Italian sovereign and bank debt throughout the euro area, Italy continues to be the key risk to financial and political stability in the euro area.

Notwithstanding these measures, markets are likely to test the resolve of policymakers to preserve the monetary union in the upcoming months, and the risk of a series of funding shocks remains elevated. The announcement of a meaningful package of mutual support should come soon—if policymakers fail to deliver, the timing of their next meeting may well be market-driven, at which point their options will be more limited and much more costly.