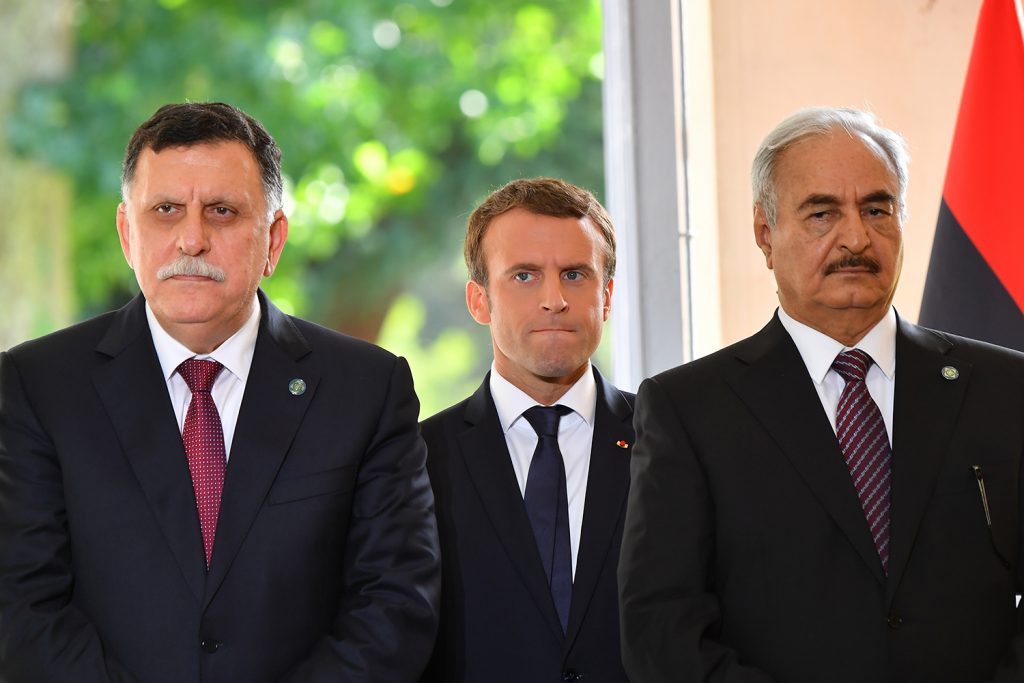 In a recent article for the Atlantic Council, Nathalie Loiseau, a former French minister for European affairs and distinguished member of the European Parliament, expresses her disappointment about Turkey’s new adventurism in the Mediterranean basin in general and in Libya in particular. While the article is a fair presentation of the French government’s views on the evolution of the crisis in Libya, the danger of Turkish “neo-Ottomanism” in international relations, and the perceived threat from the spread of the Islamist Muslim Brotherhood, the piece does not recognize or allow for criticism of France’s own misdeeds in Libya.

French interventionism and interference in domestic Libyan affairs goes back decades—to the 1940s, when France tried to take and keep control of the southern Libyan province of Fezzan, where it had economic and military interests. Kept at bay by the regime of Moammar Gadhafi for more than forty years, France, in 2011 under President Nicolas Sarkozy, seized the chance offered by the first revolts in Benghazi to recover its long-lost position in Libya by immediately siding with the rebels. Paris soon became the most intransigent power in international efforts to foster negotiations between the Gadhafi regime and the leadership of the revolutionaries. From the beginning of the conflict, France was obviously in favor of NATO’s intervention in Libya leading to regime change. The result of this policy is clearly visible: What has ensued is almost ten years of conflict and social distress.

Having completely failed in its attempts to control and guide the Libyan revolution in the direction it desired, France de facto withdrew from the North African country by the end of 2012. France then returned in late 2014 when, partially to gain credit with its most important defense-industry client, the United Arab Emirates, it threw its weight behind the Egyptian- and UAE-sponsored warlord Khalifa Haftar, a former Gadhafi-era general who defected in the late 1980s. Despite France’s official claims to the contrary, French troops were present in Libya training and assisting Haftar’s forces. The crash of a French military helicopter near Benghazi in 2016, which killed three members of France’s special-operations forces, provided solid evidence confirming what until then were only rumors of French involvement.

The crash exposed France’s hypocrisy: While Paris’s official policy supported the United Nations-led negotiations over Libya and the Government of National Accord (GNA) that resulted from them, France’s real policy on the ground was of total and full support for Haftar’s forces.

With similar ambiguity, France tacitly endorsed all the military campaigns of Haftar’s Libyan National Army, including the LNA’s attack against Tripoli and bombing of its civilian population and infrastructure, which included the targeting of hospitals and health facilities.

When forces loyal to the GNA found missiles and other weaponry belonging to France after the precipitous retreat of the LNA from the previously occupied city of Gharian, about sixty miles south of Tripoli, French officials were forced to make unconvincing excuses to explain the embarrassing situation.

Not only did France not cease its military support for Haftar, but it actually increased its diplomatic engagement with him. French President Emmanuel Macron invited the Libyan general to summits, international conferences, and private meetings, where Macron made a point to welcome Haftar with all honors. Macron thus made sure that Haftar would be de facto legitimized, despite his poor human-rights record, and recognized as an essential part of any solution to the Libyan crisis.

More recently, French officials have focused their energies on scapegoating Turkey for the situation in Libya. In particular, their claim that Turkish intervention in the Libyan conflict makes it harder to realize a negotiated solution should be questioned. Without Turkish intervention, the Russian and Sudanese mercenaries that constitute a sizeable portion of the LNA would have overwhelmed the resistance of the Tripoli forces and invaded the city, causing innumerable casualties. There was no hope of negotiations at that point. Nobody in Libya will forget that France was idly standing by while Haftar approached.

These are the facts, and the fictitious narrative devised and adopted by French officials cannot change them. It appears evident that this time France has lost a fundamental battle for influence, at least in North Africa, and therefore insists on beating a dead horse. The French government should grasp the situation and help the European Union become a real neutral and constructive actor that could play a decisive role in mediating the long and exhausting Libyan crisis. In that way, Paris can actually bring about a solution to the plight of the Libyan people.

Karim Mezran is a resident senior fellow at the Atlantic Council’s Rafik Hariri Center for the Middle East. Follow him on Twitter: @mezrank.

Federica Saini Fasanotti is a nonresident fellow in the Center for 21st Century Security and Intelligence in the Foreign Policy program at the Brookings Institution.

The Cairo Declaration is a false resolution to Libya’s conflict

Libya’s crisis is a tough puzzle to solve for Egypt

Two elements are certain in this complex scenario. Firstly, Cairo will not fall into the trap of being drawn into an open proxy war in Libya, since it might have serious repercussions on the security of its porous borders, especially in the south. Secondly, Haftar’s next moves will effectively define whether the relations have cooled between him and Cairo or whether Libya is facing yet another aftershock in a marriage that is more tactical than strategic.