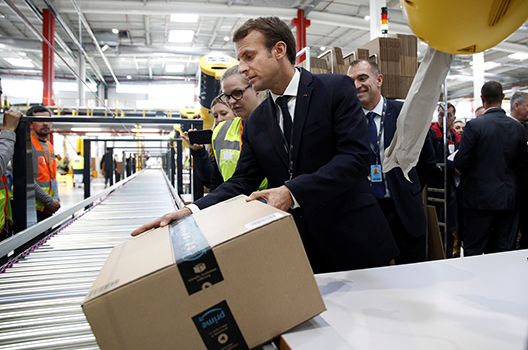 The approval of a new digital service tax by the French Senate which takes aim at US tech firms may open a new digital front in a brewing trade war between the United States and its European allies. On the eve of the July 11 decision, the US administration announced it would launch an investigation into the French legislation and its treatment of US firms under Section 301 of the Trade Act of 1974, which could allow US President Donald J. Trump to levy retaliatory tariffs and other measures against France. As the United States weighs its options and France digs in its heels, here are some key issues to keep in mind:

The new French tax is part of a larger debate taking place in Europe about society-wide implications of digitization, the dominance—and for some, the alleged abuses of power—of US tech firms, and the role of Europe and its regulatory power over the digital space. France pushed for the tax at the European Union level, but faced strong opposition from some member states, including Ireland, which has one of the lowest corporate tax rates in the EU and is the European home of many multinational tech firms. A Franco-German proposal, itself an attempt to water down a more aggressive plan by the European Commission, failed in December 2018. But the political debate over how the GAFAs—Google, Apple, Facebook, and Amazon—pay taxes in Europe will certainly not die with the collapse of any consensus in the Council at the end of the year. Paris may be the first mover now, but Berlin, London, Madrid, and Vienna are at various stages of different digital tax proposals.

Given the salience and increasing importance of the digital debate within the European Union, the “Digital Economy and Society” and “Competition” portfolios could be two of the most coveted Commissioner positions heading into this fall. Margrethe Vestager, the outgoing Competition Commissioner and source of US President Donald Trump’s ire, helped turn the position into one of the most powerful in Brussels.

Finland’s presidency of the Council of the European Union will also help ensure digital issues make their way to the top of Europe’s policy agenda. Finland, one of Europe’s most innovative economies on digital issues, will hold the rotating Council presidency until the end of this year. The country which holds the rotating presidency chairs meetings of the European Council and sets its agenda. Expect Finland to champion the “Digital Single Market” and push for an increased emphasis on investing in new technologies such as artificial intelligence and 5G. The Finns, however, are part of the coalition which objected to an EU-wide digital tax, instead advocating for a solution at the Organization for Economic Cooperation and Development (OECD) level.

Though the French tax is expected to generate hundreds of millions of euros, it also serves as a message to both Washington and Silicon Valley that an update of multilateral tax rules is long overdue to account for the digital economy, especially in the eyes of Europeans. It should also be seen as a warning that if nothing is done at the multilateral level, European states will adopt unilateral solutions.

France has insisted that this measure is purely temporary, and that they would remove the measure in favor of a multilateral solution. The move is in part an attempt to push the United States and other major economies to develop a credible and permanent solution through ongoing OECD negotiations of international principles. Paris is likely hoping other European countries follow suit, increasing the pressure and presenting a united European front.

The move also suggests that digital policy could be an emerging area of Paris-Berlin cooperation. France and Germany, with the help of Vestager, have not shied away from taking on Silicon Valley tech giants in the areas of taxation, competition and antitrust policy, content regulation, and privacy standards. Fellow EU heavyweights Italy, Austria, and Spain have largely supported France and Germany’s positions, as has Estonia at times, who used its Council presidency in 2017 to launch a formal discussion on digital tax reform.

But there are also concerns among other EU member states about the long-term repercussions of such an approach, most notably from a contingent of the so called Digital 9 (D9) comprised of Denmark, Sweden, Finland, Estonia, Belgium, Luxembourg, The Netherlands, Ireland, and the UK. There is a growing unease from some of these countries that Europe is falling too far behind the likes of the United States and China in the global digital and tech revolution. They fear overregulation and digital tax plans will hamper investment, innovation, and the friendliness of their business environments, ultimately putting Europe at an insurmountable disadvantage.

Tit-for-tax – Options for the United States

US President Donald J. Trump has already ordered an investigation into France’s new tax under Section 301, which the administration used most recently to slap multi-billion-dollar tariffs on China.  The section allows US Trade Representative (USTR) Robert Lighthizer a flexible and targeted approach: he has twelve to eighteen months to examine whether the tax constitutes an unfair trade practice and engage in negotiations with France to find a mutually acceptable solution. If there is no agreement, the legislation allows the administration to enact retaliatory tariffs against French products. At the same time, USTR could also move more quickly and complete the investigation in only a few months.

But before the administration goes after Champagne, Cognac, and French cheeses, the Section 301 investigation also has several political advantages for the US president. It is a sufficiently strong signal to other countries contemplating unilateral digital tax proposals. It also enhances US leverage vis-à-vis the EU while both transatlantic partners are grappling with several trade disputes from aircraft subsidies to steel and aluminum tariffs, and potential auto tariffs. And with Section 301 action pending, the French digital tax could provide a useful soundbite for Trump’s “America First” trade vision, without actually having to escalate trade tensions with the EU should the US economy start to look more fragile during the 2020 election season.

Other options are still on the table. US Senate Finance Committee Chairman Chuck Grassley (R-IA) and Ranking Member Ron Wyden (D-OR) have suggested using an arcane provision of the Internal Revenue Code—Section 891—to increase taxes on French subsidiaries in the United States. The rather blunt instrument is unlikely to find use anytime soon, as such a move would seriously hurt the reputation of the US investment environment among foreign investors. But it could also set precedent for similar measures against US companies abroad. More importantly, the US-French tax treaty would likely make such a measure illegal on non-discrimination grounds.

The administration has two additional options that appear less appealing. The United States could file a case before the World Trade Organization, in which it would need to prove that the tax unfairly targets foreign companies and favors French companies. But given President Trump’s criticism of the WTO that seems unlikely. The unlikelihood of this scenario is compounded by the expected length of such a case, which could outlast the 2020 election, therefore making it an unappealing strategy for the administration. Additionally, any ruling handed down by the WTO is subject to appeal, further lengthening the process.

The United States could also wait for the OECD to pass a solution, as France has said it would rescind the tax once such a measure is in place. For similar reasons—timing and a critical view of multilateral organizations—the OECD route would also not appear to be an option for the administration. This option would also allow France, and others in Europe who have pushed for a multilateral solution from the start, to come away from this dispute as the clear winners – something administration officials are sure to heed. Meanwhile, the President elect of the European Commission has made clear that the EU will pursue its own version of the tax if no multilateral accord is reached in 2020.