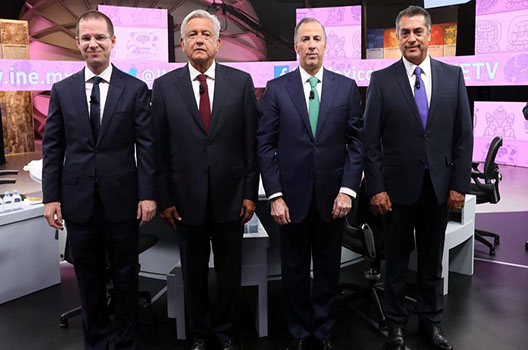 On July 1, voters in Mexico will head to the polls to fill more than 3,000 elected positions. The presidency, senate, and the chamber of deputies, as well as state and municipal positions are up for grabs. Although women eighteen and older comprise 52 percent of the electorate (44,483,446 votes), presidential candidates’ proposals on gender equality were given little attention during the campaign trail.

Two weeks ago, several United Nations agencies urged candidates to construct an agenda for gender equality to “address gender-based violence experienced by six out of ten women—56.7 percent of which have informal jobs—and the lack of female leadership at the ministerial level and in the Supreme Court.”

Caving under pressure, each presidential candidate highlighted their plan for inclusion in an exclusive Spanish-language series with Forbes. So, what does each candidate propose? Will their ideas yield tangible results?

Ricardo Anaya of the Por México al Frente coalition, which the conservative National Action Party (PAN) is a part of, pointed to Mexico’s deeply rooted machismo culture and said that there is a need for a different approach in a large city, rural community, or in an indigenous community. He emphasized the importance of education for women, including challenging the assumption of STEM fields as being exclusively for men. Anaya also discussed the importance of equal pay for equal work and modifying the federal labor law to improve the conditions for women who carry out domestic work and grant them benefits.

Anaya’s overall proposals are targeted at his base: middle-class, well-educated individuals. They do little to help lower-income women who are often heads of households as a result of adolescent pregnancy and lack even a primary education.

Tackling machismo is an admirable goal, but one that can’t completely be addressed through policy alone. Anaya will need to collaborate with civil society and religious organizations to address machismo rooted in aspects of culture if he is to bring about any long-lasting change.

Proposals from José Antonio Meade of the coalition Todos por México, which the centrist Institutional Revolutionary Party, or the PRI is a part of, focus on increasing the penalties for all forms of violence against women and expanding the network of public care centers for children and the elderly. He notes that providing care to a family member is the main reason why women withdraw from the labor force or higher education. He proposes a salary for female heads of household in vulnerable families by expanding the social inclusion program PROSPERA. He also promised to quadruple the number of full-time schools and grant loans to women.

Meade’s initiatives focus on families as the nucleus of society, a message that will resonate more with some than others. Increasing penalties for violence against women doesn’t address the root of the problem: reporting. To ensure effectiveness as a first step, he will need to create spaces where victims feel comfortable sharing their story, establish after-care centers, and increase the number of female police officers.

Andrés Manuel López Obrador, of the Juntos Haremos Historia coalition of which the left-wing Movimiento Regeneración Nacional (MORENA) party is a part of and currently leading in the polls, proposed improving women’s access to justice by increasing reporting of gender-based violence, providing training on gender equality, and strengthening existing policies like the Gender Violence Alert.

If elected, he plans to increase public spending on housing, health, education, and food programs. López Obrador promises to establish a comprehensive program for female entrepreneurs, promote employment opportunities, and strengthen labor inspection to end discrimination, with a special focus on eradicating the wage gap.

He would like to change the federal labor law and include domestic work under social security, prioritize prevention of pregnancy in adolescents, and increase the number of women in decision-making positions in the public and private sector.

López Obrador’s biggest challenge will be funding all of his proposals. He will not be able to implement everything at the same time and will be pushed to choose initiatives focused on the middle class or lower-income individuals. The justice system will not have the capacity to process potentially thousands of new cases on gender-based violence and discrimination.

López Obrador will need to develop a creative solution—an option may be public-private partnerships to ensure women receive legal counsel and get their day in court.

In 2015, female voter participation was approximately 8 percent higher than that of men. Despite the increase in turnout, “the lack of urgency to advance policy with the budgetary appropriations necessary to implement tangible change over the past decade has been clear,” said Angelica Fuentes, founder of a gender equality foundation in her own name.

Last week, the presidential candidates vowed to subscribe to the “Declaratoria Forbes” that aims to create and promote public policy that supports female development. Let’s hope these commitments aren’t forgotten after July 1.

To ensure lasting change, women will need to unite at the polls and after the election. Through engagement in civil society organizations, university clubs, and religious communities, women can hold Mexico’s next president accountable for pursuing a comprehensive gender equality agenda. After all, they have already proven to be a major driving force in social, political, and economic spheres. It is time that their power is recognized.

Katherine Pereira is an associate director at the Atlantic Council’s Adrienne Arsht Latin America Center. Follow her on Twitter at @KatherinePerei2.