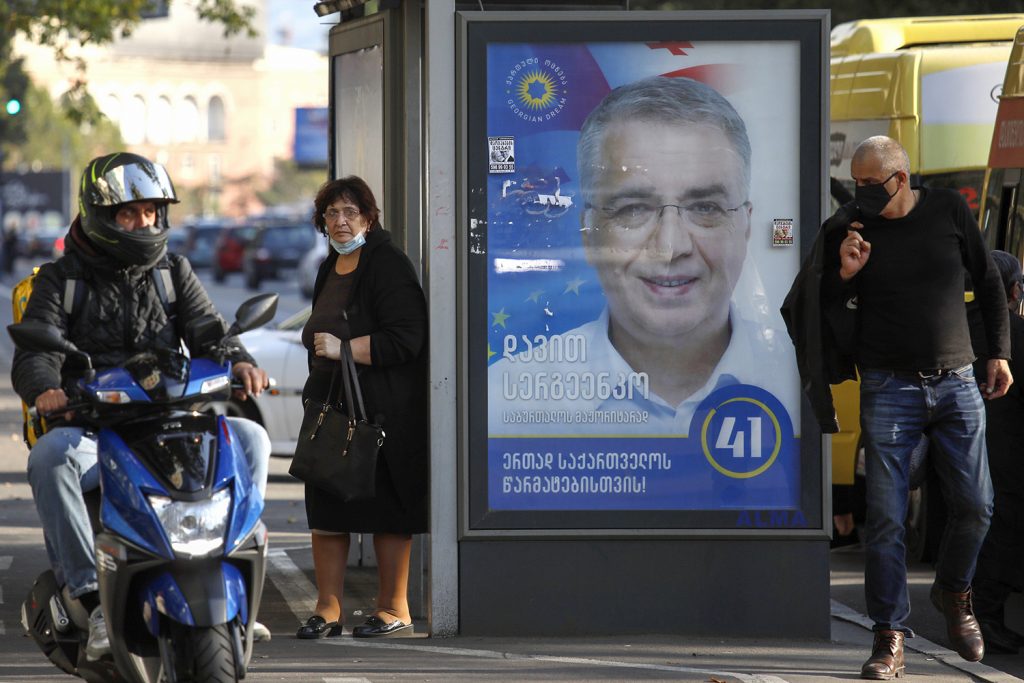 While attention remains fixed on the outcome of the US presidential election on November 3, voters in the Caucasus nation of Georgia will also go to the polls on October 31 in an important electoral contest. Amidst a global pandemic and the sudden escalation of the Nagorno-Karabakh conflict between neighboring Armenia and Azerbaijan, Georgia is holding its first parliamentary elections since hard-fought electoral reforms were approved in June 2020 and several dramatic developments have increased uncertainty about the outcome.

Constitutional changes initially proposed and but then voted down by the ruling Georgian Dream party, sought to transform Georgia’s electoral system from a mixed set-up—where some seats were allocated by proportional totals, while others were elected in first-past-the-post districts—to a fully proportional system. After popular protests and months-long negotiations between Georgian Dream and the opposition coalition mediated by international partners, Georgians reached a compromise—only thirty single-mandate seats up for grabs, down from seventy-three in past cycles, and a 1 percent threshold to gain representation in parliament. This change ensures a more pluralistic parliament and fewer chances for a single political party to hold onto disproportionate power. In other words, there is a chance Georgia will have to form a coalition government for the first time in its history. While this is something majority of the voters may want, there are no signs forming a coalition will be an easy process in current political landscape.

The pandemic is creating great uncertainty worldwide, impacting Georgia’s elections by threatening to decrease voter turnout and raise questions about transparency. Although the country managed to keep new cases of COVID-19 around an average of a dozen per day from March through August, the past two months have seen cases rise sharply, reaching 1,872 new daily infections on October 26. With an increasing number of cases, many fear that turnout could be much lower than normal. The pandemic has also created a hurdle that is guaranteed to present a challenge for a democratic election: the expected absence of international election observers. Although citizens and political observers expect Georgia will hold credible and democratic elections overall, local watchdog organizations are reporting an increase in reports of voter intimidation and threats against civil servants, activists, and opposition politicians.

Before the pandemic hit, the ruling Georgian Dream party was on shaky political ground: only 20 percent of the population supported the party, disgruntled with a poor economy, the party’s inability to pass sweeping electoral reforms, and the Georgian Parliament’s hosting of a speech by Russian Member of Parliament Sergei Gavrilov. Between 100,000 and 200,000 Georgians have lost their source of income due to the pandemic, according to varying estimates, and not all of them have qualified for temporary government assistance. According to the World Bank, the Georgian economy is predicted to contract by 6 percent this year. It is not surprising that the government is reluctant to introduce a second lockdown—at least not until after Election Day—in order to avoid losing more political favor. Moreover, even though the government’s swift response to the COVID-19 first wave and effective cooperation with the Georgian National Center for Disease Control in implementing lockdowns increased voters’ trust in their government, that trust may be fleeting: as a second wave is gaining force and daily infections are reaching two thousand cases, more people are asking whether the government used the time spent in lockdown to effectively prepare the country’s economic, education, and healthcare systems.

Escalation in the Nagorno-Karabakh conflict

The late-September escalation of the Nagorno-Karabakh conflict between Armenia and Azerbaijan has increased fears that Russia is strengthening its influence and presence in the South Caucasus. A short-lived ceasefire announced in Moscow on October 10 was another symbolic display of Russia’s critical role in post-Soviet conflicts. These tensions were coupled with a surprise investigation into the Georgian-Azerbaijani border demarcation case launched in the beginning of October. The case is widely seen as politically motivated and timed to influence Georgian voters’ national sentiments in favor of the ruling Georgian Dream right before the election. Despite this, reviving sensitive border disputes at a time when Azerbaijan is involved in a war further plays into the fears of the Georgian public and makes the country more vulnerable to external interference.

What the polls say

Different polls conducted in July and October 2020 suggest the Georgian Dream party has a significant lead; however, it is not certain that the party will be able to form a government independently. New rules require one party to gain 40.6 percent of votes to form a one-party government. A compilation of five different opinion polls below in Graph 1, commissioned by both pro-government and pro-opposition television channels and nonpartisan organizations, all clearly show that a large proportion of the electorate is still undecided. An estimate based on an expert poll by the Georgian Institute of Politics (GIP) does not include the high number of undecided voters, but similar to the opinion polls, it gives the top three polling spots to Georgian Dream, United National Movement, and European Georgia as shown in Graph 2.

All opinion polls demonstrate that Georgians are united on most domestic and foreign policy issues. Voters even have a consensus on what divides the country—personalities rather than policies. The history of Georgia’s elections reflects only one transition of power through the election, in 2012. With so much uncertainty surrounding the 2020 election, it is imperative for the government to conduct a transparent election and that politicians work to form a healthy coalition government, if indicated by the will of the people on October 31.

Nino Ghvinadze is a fellow at the Atlantic Council’s Eurasia Center.

Laura Linderman is a senior fellow in the Atlantic Council’s Eurasia Center.

Easy answers to the Eurasia region have long eluded both a Trump administration and Vice President Biden when he served in the Obama administration—will an electoral victory now give the next US president the momentum needed to manage these foreign policy challenges?

By Luke Coffey and Alexis Mrachek

Admitting Georgia to NATO without extending an Article 5 guarantee to Abkhazia and the Tskhinvali Region can fulfil the promise of the Bucharest Summit.

Image: TBILISI, GEORGIA - OCTOBER 27, 2020: Citizens walk past a campaign poster set up ahead of the 2020 election to the Georgian Parliament scheduled for October 31. David Mdzinarishvili/TASS.