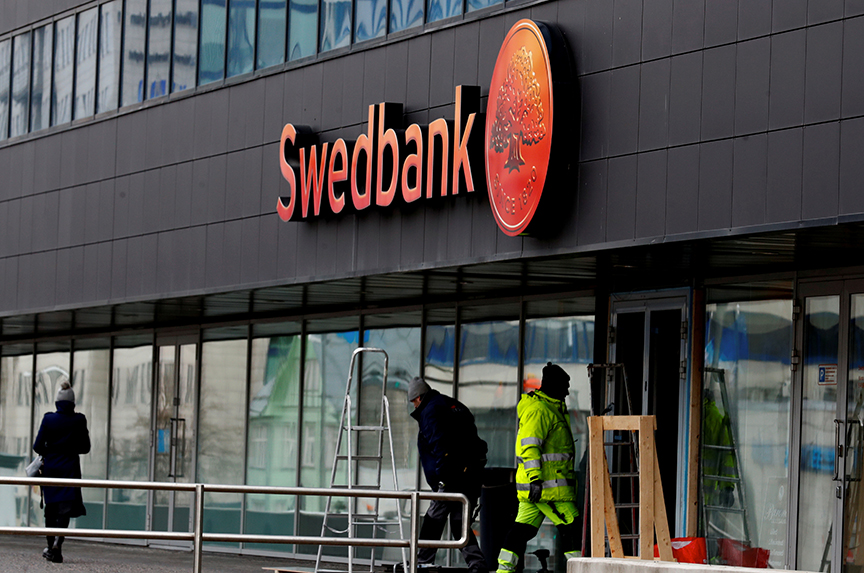 Europe has been hit by one money-laundering scandal after another. The latest allegation is that the big and well-respected Swedish bank Swedbank has “handled €135 billion from high-risk clients.” This allegation follows the revelation that the Copenhagen-based Danske Bank carried out €230 billion in dubious transactions. Many more scandals involving more banks are likely to emerge. European Union authorities had better get ahead of the train to safeguard the European banking system.

The main source of these revelations of money laundering are the Panama Papers — documents  leaked from the Panamanian law firm Mossack Fonseca that were made public in April 2016. The documents showed how Mossack Fonseca helped its clients to launder money. A number of investigative journalists, the investment banker Bill Browder, and the US Treasury keep digging, and they find ever more. As it is being laundered, money is increasingly funneled from illegal sources to banks with good reputations.

The Organized Crime and Corruption Reporting Project (OCCRP) has revealed a number of major money-laundering routes that run from Russia, Kazakhstan, and Azerbaijan through Moldova and the EU countries of Latvia, Estonia, Lithuania, Cyprus, and Malta, proceeding on to the British Virgin Islands, the Cayman Islands, and other destinations.

National banking regulators have usually shut down the worst culprits. In 2008, the Latvian bank regulator closed Parex Bank in Latvia because of bankruptcy. In 1992, Parex advertised: “We exchange all currencies and ask no questions.” The bank was a major conduit for money transfers from Russia to EU member states. Much of its business was taken over by ABLV, which the US Treasury took out of business in February 2018 when it named it a “primary money laundering concern.” Similarly, Lithuania closed down its foremost money launderer, Ūkio Bankas, in 2013, and national regulators shut several smaller Latvian and Lithuanian banks because of money laundering.

Cyprus was the dominant conduit for money transfers from the former Soviet Union to the rest of the world because of an old, favorable double-taxation agreement between the Soviet Union and Cyprus. In 2013, Cyprus ended up in a severe banking crisis. The International Monetary Fund demanded that Cyprus “bailed in” bank depositors. As a consequence, a large amount of dubious post-Soviet cash was confiscated and Cyprus became less attractive as a transfer channel.

The Baltic states have since become a focal point of money-laundering scandals. Most of the local banks have either closed down or been taken over by the big Nordic banks. At present, two major Swedish banks, Swedbank and SEB, account for about half of all banking in the Baltic states. They entered the Baltic states after the financial crash in Russia in 1998 when they bought the biggest and best local banks. Unlike the Latvian-owned banks, which focused on banking with non-resident Russians, the Swedish banks have concentrated on local banking. Danske Bank and Nordea entered the Baltic market later and played second fiddle to Swedbank and SEB, which both avoided transactions with the former Soviet Union. So the shock in the Baltics was not all that great when Danske Bank and Nordea were revealed to be involved in dubious operations because they behaved like hungry latecomers.

However, that Danske Bank possibly laundered as much as €230 billion did come as a shock. Yet, a greater shock came when Swedish State Television (SVT) alleged that Swedbank had handled as much as €135 billion in dubious transactions. Effectively, this leaves only the very cautious SEB as a significant bona fide bank in the three Baltic states.

Since all big European banks conduct transactions in US dollars, which by necessity pass through the big money banks in New York, they are subject to US jurisdiction. Revelations of money laundering can thus result in big US fines. Therefore, the European banks need to establish big and strong compliance departments that have the right to stop even substantial and profitable transactions of dubious nature.

Europe needs to improve its policing of money laundering as well, but the current national regulators are too weak. In a recent policy brief, Nicolas Véron of the Peterson Institute for International Economics and Joshua Kirschenbaum of the German Marshall Fund of the United States have sensibly concluded that the EU needs to establish a strong joint agency to control money laundering.

Europe needs to go to the root of the problem — dirty money that primarily originates in Russia. Europe should act against Russia rather than the middlemen ever further down the chain. Absurdly, since 2003, Russia is a member of the ruling global body for money laundering, the Financial Action Task Force (FATF), headquartered at the Organization for Economic Cooperation and Development (OECD) in Paris.

While local banks in Estonia and Latvia no longer have access to correspondent banking in US dollars, the dubious Russian state banks VTB and Gazprombank do. Western countries should expel Russia from FATF and the US Treasury should deny all the big Russian state banks correspondent banking in US dollars both because of money laundering and as part of the US sanctions on Russia over its aggression in Ukraine.

The main solution, however, is transparency. In June 2018, the EU adopted its fifth anti-money laundering directive. It obliges all member countries to publicly reveal all ultimate beneficiary owners of significant assets in their countries. Only when this directive has been fully implemented can banks really know their customers and stop money laundering effectively without excessive costs.

Anders Åslund is a senior fellow at the Atlantic Council and author of the forthcoming book “Russia’s Crony Capitalism: The Path from Market Economy to Kleptocracy.” Follow him on Twitter @anders_aslund.