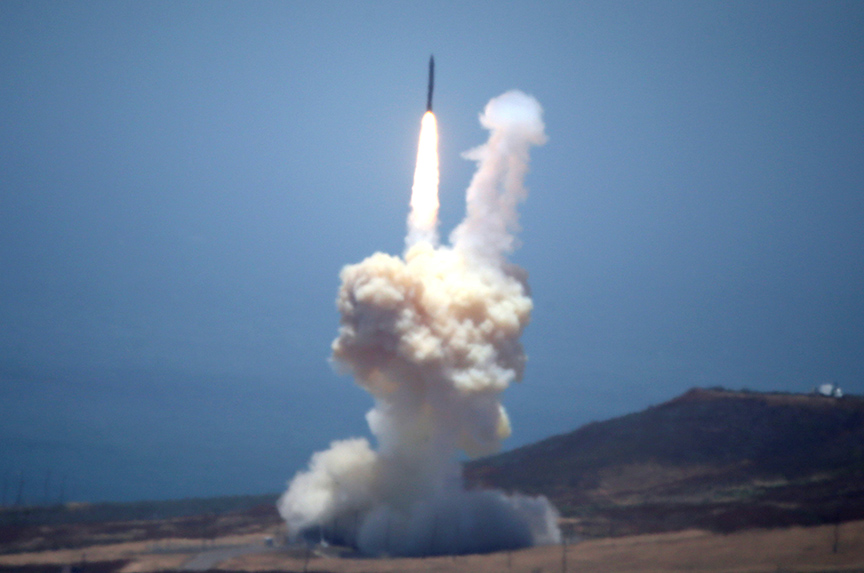 The Ground-based Midcourse Defense (GMD) element of the US ballistic missile defense system was launched during a flight test from Vandenberg Air Force Base, California, on May 30, 2017. (Reuters/Lucy Nicholson)

The National Defense Authorization Act (NDAA) passed by the US Congress in November prioritizes investments in homeland missile defense. US President Donald J. Trump has called for a “state-of-the-art” missile defense system and this new defense budget begins to take steps in that direction.

The bill authorizes a $12.3-billion-dollar topline budget for the Missile Defense Agency. This includes the $8 billion from the Trump administration’s original request, plus an additional $4 billion in emergency spending for new measures to deal with North Korea. Spending on missile defense steadily declined in the Obama years, but this topline budget exceeds the previous high-water mark of $11 billion under then US President George W. Bush in 2007.

In the face of the growing North Korean nuclear threat, the bill emphasizes upgrades to the existing Ground-based Midcourse Defense (GMD) system. The United States’ current missile defense system relies almost exclusively on ground-based defensive missiles designed to intercept enemy offensive missiles in their midcourse phase—as they glide through space on their way to their intended target.

The bill instructs the Secretary of Defense to select a third GMD site, in the continental United States, to add to the existing sites at Fort Greely in Alaska and Vandenberg Air Force Base in California. Located on the East Coast or in the Midwest, a third site could give the United States the ability to “shoot-look-shoot.” In other words, it would allow the United States to shoot an interceptor at an incoming missile, look to see whether the intercept was successful, and, if not, launch a second interceptor. This increases the chances of destroying an incoming missile and reduces costs by saving additional interceptors (at a price tag of $100 million a pop) if the first intercept was successful.

The NDAA also advises increasing the number of deployed Ground-based Interceptors (GBIs). The United States is currently on its way to increasing the number of GBIs from thirty to forty-four. But it is estimated that North Korea may have up to sixty nuclear warheads and that number will likely increase. Moreover, when considering that the United States may need to expend multiple interceptors for each incoming warhead, the math is not currently in our favor. The bill recommends deploying an additional twenty GBIs at Fort Greely “as soon as technically feasible” and to plan to work up to the currently available capacity of 104 GBIs at the two existing sites.

Spending will also be allocated to increase the quality, not just the quantity, of interceptors. The bill funds a redesigned kill vehicle, with a simplified design and that will allow improved in-flight communication. In addition, it allocates resources to developing a Multi-Object Kill Vehicle (MOKV). At present, each GBI can intercept a single incoming warhead, but a MOKV (much like a Multiple Independently Targetable Reentry Vehicle [MIRV] warhead) would place multiple kill vehicles on a single interceptor missile, enabling it to destroy multiple incoming warheads. In addition, a new C-3 booster will allow for a two- or three-stage option. Kill vehicles can separate from the interceptor only after the boosters have burned out. Current interceptors have three-stage boosters, which allow them to reach enemy missiles at great distances, but it also prevents the flexibility to perform shorter-range shots at missiles closer to their intended target. The new C-3 booster will improve the ability to engage missiles at later stages of flight.

While GMD focuses on midcourse intercept, an ideal defense would be a layered system with multiple options for engaging enemy missiles at various stages of flight. With this goal in mind, the NDAA also authorizes deploying a boost-phase defense capacity “as soon as practicable.” Enemy missiles are most vulnerable in the boost phase (the period from launch until the boosters burn out) because they move at comparatively slower speeds and their warheads have not yet separated. An Airborne Laser (a high-powered laser mounted on a Boeing 747) was developed for this purpose under the Clinton and George W. Bush administrations, but the program was canceled under former US President Barack Obama.

According to David Sanger at the New York Times, options under consideration for reconstituting a boost-phase capability include: air-to-air missiles on fighter aircraft or drones, or lasers mounted on drones. The latter option is particularly attractive for several reasons. Hitting a target with a continuous beam of energy is less difficult than “hitting a bullet with a bullet,” the cost per shot is lower, and it is less provocative than sending a live missile over enemy territory.

Other funding is allocated to improve defenses for Hawaii (the US state most vulnerable to the North Korean threat), the testing of SM-3 Block IIA missiles against an intercontinental ballistic missile (ICBM)-range target, and the development of a space-based sensor and intercept layer.

To go into effect, the legislation must still be signed by Trump and Congress will need to find funds for a defense budget that exceeds the limits of the 2011 Budget Control Act. If approved, this defense budget would take important steps toward improving US defenses against emerging 21st century security threats.

Matthew Kroenig is a nonresident senior fellow in the Scowcroft Center for Strategy and Security at the Atlantic Council and an associate professor of government and foreign service at Georgetown University. Follow him on Twitter @kroenig.