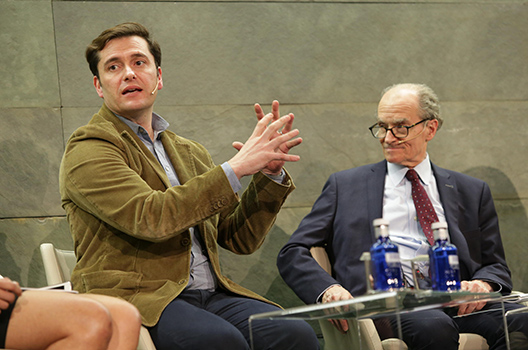 “Disinformation is a cause of democratic deterioration, but it is also a symptom of a much deeper disease affecting liberal democratic society,” according to Ana Palacio, a former Spanish minister of foreign affairs. Comparing the fight against disinformation to the war on drugs, Palacio warned on March 5 that actions to stop foreign actors from spreading disinformation must be paired with concrete steps to make democratic societies less vulnerable to disinformation operations. “Unless demand is also addressed,” Palacio argued, “we are in for a very, very long and maybe interminable war.”

Palacio spoke as part of the Atlantic Council’s Disinfo Week series in Madrid, Spain. Disinfo Week brings together leading disinformation experts and government representatives for substantive policy discussions and debates for four days in three European cities (March 4 in Athens, March 5 in Madrid, and March 7-8 in Brussels). As Palacio explained, “disinformation represents an existential threat to liberal democracy. It is a threat that eats our society from within. And it is a threat that must be responded to.”

Palacio stressed that changing social, economic, and technological forces are making democratic societies more susceptible to foreign propaganda and intentional influence operations. “As governments have gotten increasingly complex and technical, the citizen has been left behind,” she said. “A disempowered population,” she continued, “is fertile ground for those peddling disinformation.” While efforts to prevent the spread of foreign disinformation actors is justified, Palacio maintained that “putting on sunscreen is no longer enough…If we are to meet this challenge, we simply have to get our business and our affairs in order. We must create resilience in our societies.”

Tackling this “demand side” of the disinformation battle comes down to “media literacy and social media literacy,” according to Atlantic Council Distinguished Fellow Daniel Fried, who stressed that societal resilience to propaganda is not a new issue. “Every advance of technology can be and has been subverted for propagandistic purposes,” Fried explained. “I refuse to believe that human beings are now much stupider than we were in the 19th century,” he said, noting that previous generations learned eventually to discriminate between reliable and unreliable sources on new platforms.

The challenge now, however, is limiting the damage from a technology that allows propaganda and fake news to permeate much more quickly. “Now, of course, thanks to the Internet, the process [of distributing disinformation] doesn’t take weeks. It takes hours, sometimes minutes,” Fried explained.

Alexandre Alaphilippe, executive director of the EU Disinfo Lab, warned that new technology will also make it much harder for consumers to discern what is real online. New deepfake technology means malign actors “now have the capacity to produce fake images, fake faces of people in an instantaneous way,” he said. Online consumers, Alaphilippe argued, now have to constantly ask themselves, “how much of the world around us is fake?”

David Alandete, a journalist with Spanish newspaper Diario ABC, warned that the growth of online news consumption has also forced “journalists…to compete with people who act like they are journalists, but they are not.” He argued that influence operations “[kill] the journalist and [try] to bypass the press in order to make it easier for politicians or authoritarian regimes to talk to people directly,” and without the standards for truthful reporting that journalists are subject to.

Nicolas de Pedro, a senior fellow the Institute for Statecraft, argued that disinformation actors are mainly “taking advantage of our free flow of information and freedom of speech” to undermine democratic societies. He pointed to the sagging confidence of democracies, growing disruption in the journalism industry, and increasing digitalization as factors in the increasing vulnerability of democracies. “What the Kremlin is doing is to offer a platform to multiply the effect of our own crises,” he argued.

Fried was confident that despite the challenges, disinformation could be effectively overcome. “The technical solutions actually exist. We, Europe and the United States, need to get beyond the existential dread in this crisis and start focusing on the solutions,” he argued. Some solutions would include clearer labelling of foreign disinformation accounts like RT and Sputnik, banning of imposter accounts, and limiting the activities of bots, Fried said. But he agreed with Palacio that attention also needs to be paid to lessening the demand for disinformation in democratic societies. “The task is to get sensitive enough so that a disinformation operation is rendered anathema and people start to turn away from it and start to shun it,” he said.

While the challenges seem daunting, Fried maintained that the solutions are out there. “It is the purveyors of disinformation or those who profit from disinformation who want to convince us that there are no solutions,” he said.