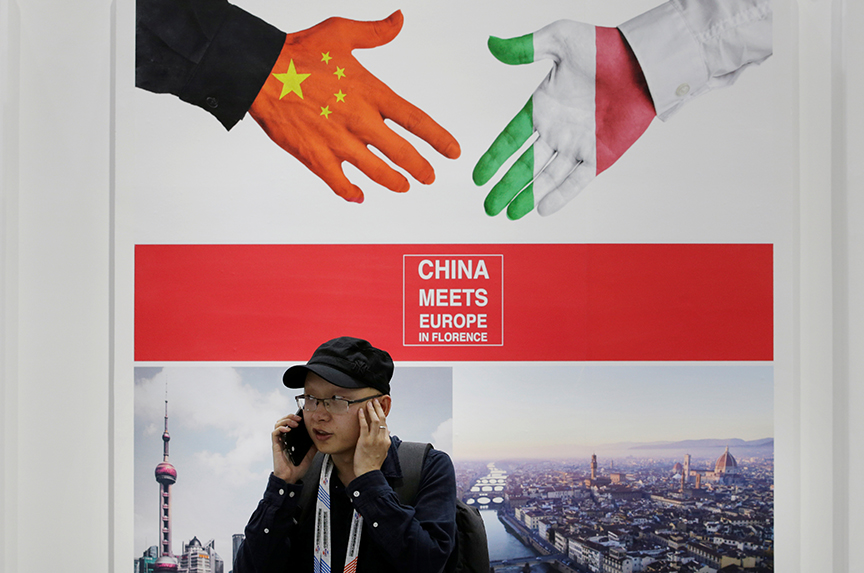 A man took a call next to a poster stating “China meets Europe in Florence” at China International Fair for Trade in Services in Beijing, China, on May 28. (Reuters/Jason Lee)

The US-China trade war could be a complicating factor in the US-European Union (EU) trade negotiations and undermine the World Trade Organization (WTO).

China has developed close economic ties, including through the Belt and Road Initiative, with a number of Central and Eastern European countries and several Southern European countries, like Italy and Greece. Many EU members see an important economic benefit in being more closely engaged with China on BRI trade and investment projects and many have become major users of Chinese telecommunications and other technologies.

In coming negotiations, will the United States say to the EU “as a precondition for making the deal you have to reduce your ties with China or agree not to further increase them or not participate in BRI projects or not buy certain Chinese advanced technology products?” And will China step up its efforts to involve greater numbers of European countries in the BRI, further develop its markets in the region, and apply pressure on countries to use Chinese companies in domestic projects as well as purchase Chinese technology or Chinese products rather than American ones?

Much of this kind of intense economic competition—with major political, strategic, and geopolitical implications—might have occurred in any case. However, if there is an all-out US-China trade conflict, it could become far more intense. And it could spill over into contentious or conflictual Chinese and US trade/investment/technology competition centered in Europe or focused on relations with individual European countries—and other countries as well.

The full scope and depth of the impact of a prolonged US-China trade war have yet to be fully understood. This is economic terra incognita. It differs from any other economic conflict the world has seen in the last seventy years. Much of the types and intensity of issues and frictions that could emerge is avoidable if both sides move toward compromise and restraint. The risk is high that such a trade war will have profound repercussions for growth, political relations, and the global economic order. Moreover, with other aspects of the world trading order increasingly strained, due to the still enormous uncertainties surrounding Brexit, intensified US use of sanctions and tariffs against a wide variety of nations, doubts about the legislative future of the United States-Mexico-Canada Agreement (USMCA) on trade, internal stresses and divisions in the EU, and an drastically weakened WTO this trade war adds a heavy weight to an already troubled global economic order.

The state of the WTO, in particular, presents very serious concerns. This is the world’s central trading organization. In an all-out and prolonged US-China trade war, with spiraling tariffs, proliferating export restrictions, and tighter curbs on investment, serious questions will arise as to whether various US and Chinese measures comply with WTO rules. There will likely be efforts to politicize the WTO. Both the United States and China will press the WTO to take its position and penalize the other for its actions and will twist arms of other members to support its positions. This would produce deep fissures in an already deeply troubled and weak institution. An all-out US-China trade war could rip the WTO apart, raising concerns about a recurrence of the trade disorder of the 1920s.

Neither China nor the United States has much confidence in the WTO. And efforts are being made by the United States and like-minded countries—so far unsuccessfully—to strengthen it. The WTO is founded on sound principles and has served the world well for decades—even if it has considerable deficiencies.  Ideally, the United States, China, and a group of other countries should aim to work together to bring the WTO up to a level of effectiveness that meets the challenges of the 21st century and improve its dispute-settlement capability. That would serve the interests of both countries. Both sides have broad global trading interests. Without an effective WTO as a framework for resolving disputes, the system can quickly deteriorate. But, while some disputes between China and the United States have been successfully worked out by the WTO, the two countries have not done much together to substantially improve it yet.

Lurking on the horizon is also the notion that the United States might invoke the notion that what some in Washington consider a low value for the Chinese yuan should be a target for US countermeasures. That would be a further escalation. There are already calls for invoking countervailing duties against Chinese products (and those of other nations as well) on the grounds—never before used by the United States or any other country—that a country’s “too low” currency constitutes a subsidy. Doing so would constitute a sharp and unprecedented policy change, one that would deeply disrupt global trading rules and norms and the post-war trading order.

Robert Hormats is an Atlantic Council board member, vice chairman of Kissinger Associates Inc., and a former US undersecretary of state for economic, energy and environmental affairs.

This is part of a series of blog posts on the US-China trade relationship in the runup to the meeting between US President Donald J. Trump and Chinese President Xi Jinping later this month at the G-20 Summit in Japan.