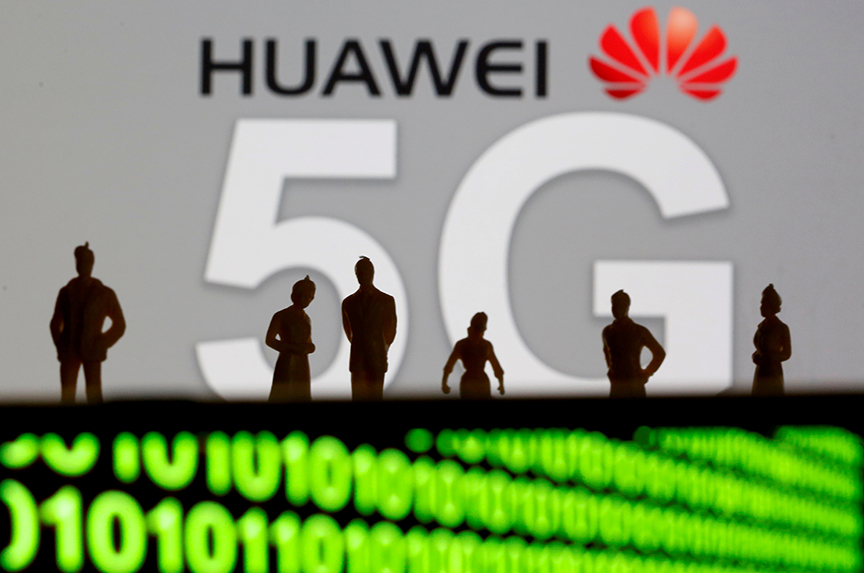 Robert A. Manning, a senior fellow in the Atlantic Council’s Scowcroft Center for Strategy and Security, explains: “It will be difficult to avoid licensing any Huawei or Chinese 5G technology as Chinese firms hold 37 percent of all 5G patents.”

Huawei, for instance, said Manning, “has over 1,000 patents, so many nations and carriers may have little choice but to license some Chinese 5G technology.”

US officials have been dead set against allies working with Huawei. They say the use of Chinese technology carries grave security and privacy risks as it could create a backdoor for the Chinese government to spy on US networks. Nevertheless, some US friends and allies have been flirting with the idea of using Huawei’s technology to build their 5G networks.

An official loses his job

On May 1, British Prime Minister Theresa May fired Defense Secretary Gavin Williamson following the leak of a proposal discussed at a secret government meeting to allow Huawei a role in the United Kingdom’s new 5G wireless communications network.

In a statement announcing Williamson’s firing, Downing Street said the prime minister had “lost confidence in his ability to serve in the role of defense secretary and as a member of her cabinet.”

“The prime minister’s decision has been informed by his conduct surrounding an investigation into the circumstances of the unauthorized disclosure of information from a meeting of the National Security Council,” it added.

Penny Mordaunt, the international development secretary, has been appointed defense secretary and will be the first woman to hold that post.

Williamson was fired following an investigation into the leak of the content of discussions at a private UK national security council meeting where it was reportedly agreed to allow Huawei to supply “non-core” 5G technology.

“The present British government has been more than usually leak-prone, as cabinet discipline has broken down amidst recriminations between ministers and jockeying for position amongst those aspiring to replace the terminally-weakened prime minister, Theresa May,” said Peter Westmacott, a distinguished ambassadorial fellow with the Atlantic Council’s Future Europe Initiative.

“But leaking details of a national security issue as sensitive as the role of Huawei in the UK’s 5G infrastructure was unprecedented,” said Westmacott, adding, “The prime minister and her cabinet secretary, Mark Sedwill, were determined to make an example of whoever was responsible.”

“The blame fell on Gavin Williamson, defense secretary. He has form on Chinese issues in that his ill-considered promise to send Britain’s new aircraft carrier into the South China Sea six months ago set off a diplomatic row with Beijing only resolved last week by Chancellor of the Exchequer Philip Hammond’s visit for the Belt and Road Initiative summit,” Westmacott pointed out.

“Williamson is protesting his innocence and refused to resign, forcing May to fire him. But the evidence must have been convincing for the prime minister to sack a minister who was until recently one of her closet allies. In the process, she has shown that, however weakened she may be politically, she can still act decisively when one of ministers steps seriously out of line,” he added.

On April 12, US President Donald J. Trump and the Federal Communications Commission unveiled several initiatives to accelerate 5G network deployment in the United States. “Secure 5G networks will absolutely be a vital link to America’s prosperity and national security in the 21st century,” Trump said. He maintained: “The race to 5G is a race America must win, and it’s a race, frankly, that our great companies are now involved in.”

But Chinese telecommunications firms, like Huawei, are poised to dominate this field because they offer inexpensive equipment for the 5G networks.

US officials warn that by adopting Huawei’s technology, friends and allies like the United Kingdom will put intelligence sharing with the United States at risk.

On a trip to Hungary in February, US Secretary of State Mike Pompeo said the United States may have to curtail some operations in Europe if countries do business with Huawei. “What is imperative is that we share with them the things we know about the risks that Huawei’s presence in their networks present—actual risks to their people, to the loss of privacy protections for their own people, to the risk that China will use this in a way that is not in the best interest of Hungary,” Pompeo said.

“But second, we have seen this all around the world. It also makes it more difficult for America to be present. That is, if that equipment is co-located where we have important American systems, it makes it more difficult for us to partner alongside them. We want to make sure we identify (to) them the opportunities and the risks with using that equipment. And then they will get to make their decisions,” he added.

On the risks posed by Huawei’s technology there is bipartisan agreement in Washington.

Speaking at NATO Engages, a conference co-hosted by the Atlantic Council in Washington on April 3, US Sen. Chris Murphy (D-CT), citing the example of Huawei’s 5G capabilities, said: “the idea that a company that is so directly connected and affiliated with the Chinese government could switch on and off our data is something that should cause all of us to lose sleep at night.”

“And so while the Russians are much more overt and aggressive and outrageous in their online provocations—we catch them a lot more easily—the Chinese have a long-term play here, a long-term play to grab a hold of the tubes through which all of our data flows.  And we have to be just as vigilant about that,” Murphy warned.

Huawei’s founder, Ren Zhengfei, is a former People’s Liberation Army (PLA) officer. US officials point to Ren’s ties to the PLA as further evidence of the national security risk posed by his firm.

“There is no question that Huawei equipment—hardware and software—is flawed, has been detected for backdoors, and poses varying degrees of risks,” said Manning.

There are also larger issues that “blur the line between a private firm and a state-directed one,” said Manning. China’s 2017 National Intelligence Act that requires organizations to “support, co-operate with and collaborate in national intelligence work.”

“This [UK] decision is a major blow to the US government and the transatlantic relationship, especially as the UK is a key member of the intelligence sharing network Five Eyes,” said Benjamin Haddad, director of the Atlantic Council’s Future Europe Initiative.

“This is another example that shows how Brexit could be detrimental to transatlantic security: it encourages Britain to open to different partners at the expense of a coordinated European response,” he added.

“The UK deserves an open debate about the adoption of Huawei technology to develop 5G networks,” said Haddad, adding: “With its opaque governance structure, its potential ties with the Chinese government, and the risks of spying, cyberattack or data theft, Huawei should be approached with extreme caution by European governments.”

The problem with regard to the US campaign to deter other countries from using Chinese technology is that “each country has a distinct predicament as to what 4G system it uses and the costs and benefits of upgrading with different suppliers for 5G,” Manning said.

In the UK, the National Cyber Security Centre has concluded that any risks posed by using Huawei’s technology can be managed. The center said it has “a unique oversight and understanding of Huawei engineering and cyber security.”

The May government insists no decision has been made on using Huawei’s technology.

“With regard to the US demands on boycotting Huawei, the UK has tried to walk a fine line, distinguishing between Huawei equipment that is a security risk (and denied or limited, for example, UK government and defense communications), and equipment such as antennae and base stations where they have concluded that risk is minimal,” said Manning.

In March, the European Commission offered guidelines on managing the risks associated with Chinese vendors, but rebuffed US efforts to ban Huawei and ZTE, another Chinese firm.

“In general, while European economies should be open to mutually beneficial trade with China, it is also necessary to underline the risks of political influence associated with investments,” said Haddad.

“A coordinated European response is key to screening critical investment in infrastructure, the media, defense, energy, etc.” Haddad said, adding, “In March, the [European] Commission called China a ‘systemic rival’ and is pushing for an investment screening mechanism, still a far cry from the US’ Committee on Foreign Investment in the United States, however.”

Manning said “given the reality of Chinese dominance in 5G equipment—some of which US firms do not manufacture” and the fact that some partners will feel “cheaper Huawei equipment overrides the risk factor” there is “little alternative but to manage risk.”

“It is a shades of grey, not entirely a black-and-white situation,” he said, adding, “The United States may have to alter what it shares with some partners.”

Huawei, meanwhile, has filed a lawsuit challenging US government restrictions on the use of its products. “The US Congress has repeatedly failed to produce any evidence to support its restrictions on Huawei products,” said Huawei Rotating Chairman Guo Ping. “This ban not only is unlawful, but also restricts Huawei from engaging in fair competition, ultimately harming US consumers.”

Image: Toy figures are seen in front of a displayed Huawei and 5G network logo in this illustration picture taken on March 30. (Reuters/Dado Ruvic/Illustration/File Photo)