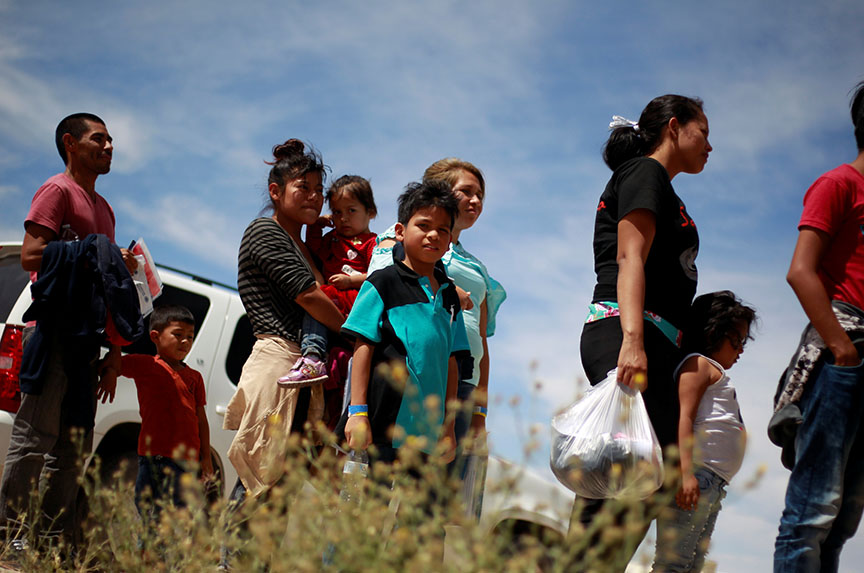 Central American migrants stood in line before entering a temporary shelter in Deming, New Mexico, on May 16 after they illegally crossed the border between Mexico and the United States. (Reuters/Jose Luis Gonzalez)

In an effort to head off the escalating tariffs on Mexican imports that US President Donald J. Trump has threatened to impose as of June 10, Mexican President Andrés Manuel López Obrador (AMLO) dispatched cabinet members to Washington for meetings to work through the complex issues surrounding migration flows from Central America.

If imposed, these US tariffs would have major near-term economic and political costs for the United States and Mexico. Over the longer term, they could cause serious damage to a bilateral relationship that has progressively become more important since the establishment of the North American Free Trade Agreement (NAFTA) in 1994.

There is plenty of responsibility to share for the immigration challenges being faced today on the US-Mexico border.

However, the Mexican government has not had sufficient resources to properly manage the increased flow of migrants, nor has it applied a consistent policy on how to treat and care for them. Mexican authorities are struggling to effectively balance their commitment to respect migrants’ human rights with their declared policy of not interfering in the affairs of other countries, in this case the United States as so many undocumented persons can move across the US-Mexico border in an unregulated way. Mexico’s immigration and refugee agencies are severely understaffed, under-resourced, and overwhelmed by the increased numbers of Central Americans heading north.

The United States is reportedly sending border agents to help Guatemala strengthen that country’s border and migration services, because it is a key location to manage migrant movements northward. Washington and Mexico City, however, have not hammered out an agreement on managing the near-term challenges of so many Central Americans trying to get to the United States, nor have they agreed on ways to help strengthen Mexico’s capacity and resource needs.

Acting US Homeland Security Secretary Kevin McAleenan has said that the United States seeks tighter security on Mexico’s border with Guatemala, a crackdown on migrant smugglers in Mexico, and an agreement whereby asylum seekers would be required to seek refuge in Mexico: areas where Mexico would need additional capacity/resources and to alter some policies.

Ironically, public statements by leaders may have generated larger migrant numbers.  When Mexico’s new president, AMLO, sent messages indicating he would welcome and treat migrants well, they came in larger numbers than Mexico could handle, and when Trump threatened to close the border, Central American migrants apparently heard that they had better move quickly to the United States before that option was taken away.

It is important to note that serious gaps in US capacity to manage and process migrants, including the dire shortage of officials to adjudicate asylum claims, have contributed significantly to the “emergency” by seriously slowing the United States’ ability to handle migrants asking to be granted asylum under US law and thus also to develop potential options for having migrants wait in Mexico.

New US tariffs, however, would multiply the suffering on both sides of the border. US consumers and producers would effectively pay billions of dollars more for goods because of the tariffs.  Since the United States makes and trades so much with Mexico, a 5 percent tariff could equal a $17 billion tax for US businesses and consumers, according to the US Chamber of Commerce. That amount could grow to $86 billion with the threatened 25 percent tariff, the Chamber estimates.

Oxford Economics estimates that a sustained 25 percent US tariff on Mexican imports could cut 0.7 percentage point from US economic growth and push Mexico into recession. The costs would be widespread across US states and sectors of the economy.

New US tariffs would also make ratification of the new North American trade agreement, the United States-Mexico-Canada Agreement (USMCA), much more complicated. Many thousands of businesses and twelve million US workers whose jobs are supported by trade with Canada and Mexico could benefit if a modern trade agreement were approved. In addition, already suffering US farmers could be particularly hurt if Mexico retaliates with duties of its own once the US tariffs go into effect.

Mexican officials say they are working hard to meet the migrant influx and cite increasing detentions, returns, and granting of asylum in recent months, but add that Mexico’s capacities are severely overloaded by the sheer numbers, as are US capacities at the border. They say they will look for options with US officials to improve the situation in the near term and urge that steps be taken to address the dramatic situation in Central America that has caused these massive migrant flows.

US-Mexico talks this week can help both countries avoid a costly detour from the joint effort to build North American prosperity and partnership over the past thirty years. Ministers can begin to improve the bilateral and regional approach to immigration issues, which by its nature will require a multiyear effort with substantial investments.  But we should not expect miracles overnight.

By initiating and sustaining a process to craft, develop, and implement solutions, the United States and Mexico can seriously address this expanding human emergency in a way that provides good answers in the near and long term via effective bilateral and regional strategies.

If this process bears fruit, it can also serve as a foundation for addressing other tough, related issues, such as cross-border crime and drug smuggling.

This kind of sustained diplomatic engagement is the most effective way to find solutions and to avoid long-term damage to the vital relationship with our southern neighbor.

Earl Anthony Wayne is a nonresident senior fellow with the Atlantic Council’s Global Business and Economics program and co-chair of the Advisory Board of the Mexico Institute at the Woodrow Wilson International Center for Scholars. He is a former US ambassador to Mexico and US assistant secretary of state for economic and business affairs.