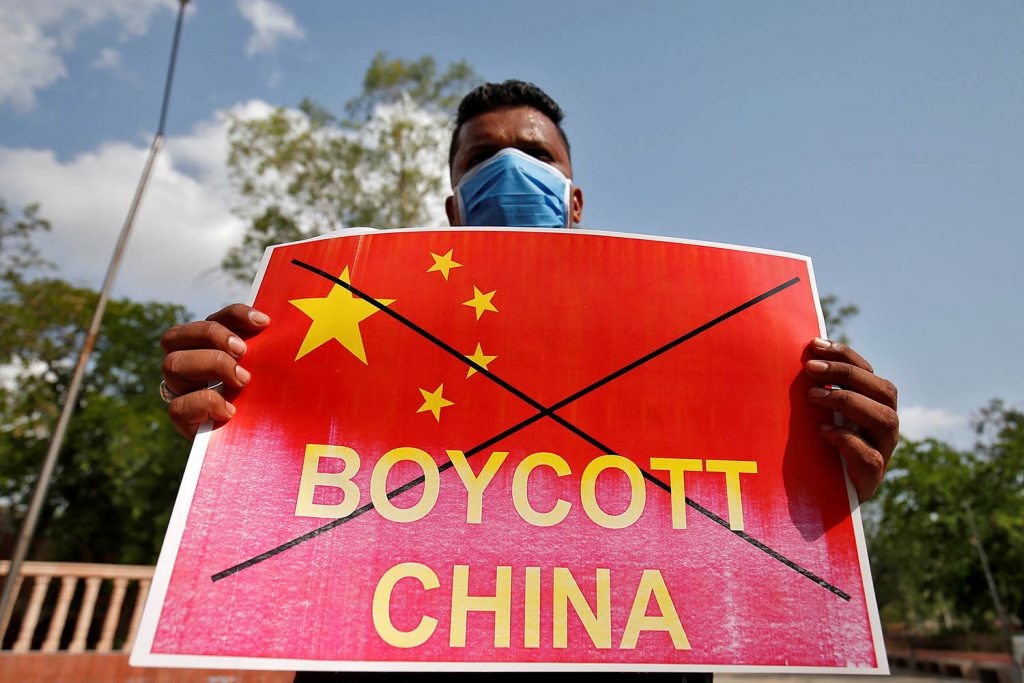 The Indian government may soon issue a ban on Huawei—preventing the Chinese telecommunications company from supplying 5G infrastructure to India and changing the balance of competition between US and Chinese technology companies in the Indian market. The potential move marks a notable reversal from India’s December 2019 decision to allow Huawei to participate in the country’s 5G trials, but comes amid current hostility between India and China, already marked by the Indian government banning fifty-nine Chinese apps.

As this plays out, US and Chinese technology firms continue pushing into India’s market, across everything from social media to cloud computing.  As the second most populous country on earth, a home to a rapidly growing technology sector, and the source of a new model of data governance, India’s technology markets and growing demand are increasingly having a greater influence on global technology development and norms. The data and cloud competition between US and Chinese firms taking place in the Indian market is impacting India’s digital landscape as well by shaping the services offered and their accessibility.

The Indian government’s reportedly planned ban on Huawei comes during a pivotal time: in the pandemic era, India’s demand for technology like cloud services is increasing, and US companies are swooping in to profit, both off the demand and the timing of the possible ban. India’s growing cloud and Internet of Things (IoT) markets have proven attractive to foreign investors and technology companies. According to the IDC, 64 percent of Indian organizations expect increasing demand for cloud computing as a result of the pandemic. Remote work has bolstered demand for collaborative Software as a Service (SaaS) solutions and increased Infrastructure as a Service (IaaS) spending from Indian enterprises, technologies which enable remote collaboration on documents, calling into virtual meetings, and more. The expanding public cloud market in the Asia Pacific (a region with a compound annual growth rate of 15.3 percent, only second to North America) further suggests the growing demand in India is likely to sustain within the broader Asian region. Capitalizing on this trend, cloud service “hyperscalers,” large companies with massive amounts of infrastructure such as IBM and Microsoft, have already ramped up their regional presence in India by offering technological solutions or free services to local pandemic health responders. All to say, the pandemic has only heightened the demand for cloud services in India, and US companies are already positioning to capitalize on those growing demands.

Chinese firms have established key investments in India, but their position has grown more precarious in light of New Delhi’s shifting position on allowing Chinese technology and investment into its domestic market. Tencent and Alibaba, Chinese technology giants that both offer cloud services, have for the past few years been spending millions of dollars (exact figures are unclear) to acquire stakes in Indian technology startups. In May, Tencent announced a five-year, $70 billion plan to invest more in cloud computing, artificial intelligence, and cybersecurity; and in June Alibaba announced a $283 million investment in partnerships to improve its services—both undoubtedly to include spending in India. Both Tencent and Alibaba are still competing directly against the cloud services offered by Google (Google Cloud), Microsoft (Azure), and Amazon (Amazon Web Services). These competitions painted India as a new kind of battleground for US and Chinese firms going head to head.

All this investment from Tencent and Alibaba, however, happened before India-China relations became particularly sour: before the death of twenty Indian soldiers in a conflict with Chinese troops on the border, before India banned fifty-nine Chinese apps, and before banning Huawei became an imminent possibility. Now, Chinese firms are in a more difficult position, and it is unclear if domestic political factors in India, concerns about Beijing’s influence on its domestic firms, or other factors will draw additional pushback from the Indian government. Back in April, for instance, New Delhi had already cracked down on Chinese foreign direct investment in the country; it’s possible the government could expand those restrictions even more.

This has arguably provided more of an opportunity for US companies to gain an edge over their Chinese competitors in India. In some cases, US firms seek to grow their market share by partnering with local telecom giants and integrating existing services. For example, Facebook’s $5.7 billion investment in Reliance Jio, a three and a half year old subsidiary of the biggest telecom operator in India, looks to integrate WhatsApp and Jio’s e-commerce products. This investment, easily surpassing the $30 million that Facebook has spent on Indian tech startups in the past, demonstrates the company’s commitment to competing in the Indian market. Facebook is not alone; Intel ($253.5 million), Qualcomm  ($97 million), and several other US companies have also placed bets on Jio, pouring collectively $15.5 billion into the telecom company. Amazon, in other parts of the market, has invested over $6.5 billion in India to date. In light of the pandemic, some previously mentioned US cloud providers are offering more services to leverage local community connections in ways that could also grow their market foothold.

In contrast, other US companies are attempting to gain Indian users by reducing the cost and increasing the accessibility of services in comparison to those offered by Chinese firms. With its promise to invest $10 billion in India in the next five to seven years, Google is partnering with local smartphone vendors to improve language accessibility and reduce cost, hoping to gain traction in the cellphone market currently dominated by Chinese manufacturer Xiaomi. India’s recent ban on Chinese apps such as Bytedance’s TikTok might further incentivize American investment in the kinds of hardware and software needed to deliver more US applications into the market. Before the ban, six of the ten top most downloaded apps in India came from Chinese companies, and American apps have lost market share over the past five years. This gap presents a huge vacancy in the market that American companies could be eager to fill.

All told, the future of Chinese technology in India is in many ways uncertain, but US firms don’t have a total edge; both countries’ cloud competitors, for instance, are grappling with the implications of a data protection bill currently circulating in India’s parliament, which would require, among other things, that companies storing certain data on Indian citizens keep copies within India. Alibaba and Tencent are already preparing for possible data localization requirements by investing in local data centers, which could also give them an edge over US competitors like Amazon who may have a bigger task of migrating cloud infrastructure to India. US firms, for their part, have lobbied aggressively against the considered data localization rules, but they are also simultaneously preparing to have to comply if the law passes in its current form.

Against this backdrop, it is possible that India and the United States have significant potential opportunities for cooperation. As the world’s two biggest democracies, there is great opportunity for multilateral efforts to promote shared democratic norms for the internet and for emerging technologies like artificial intelligence. As countries with ever-growing technology sectors, Washington and New Delhi could also propagate democratic norms and behaviors through regulating tech companies operating in their markets and through public-private partnerships in their respective countries.

To get to this point, however, one of two things need to happen. Either one, both countries need to undergo some shifts in their current trajectory. Both President Donald Trump in the United States and Prime Minister Narendra Modi in India have embraced growing techno-nationalism, and a promotion of internet and technology policy that focuses myopically on a technology’s country of origin rather than on concepts like trust. Or two, technology entrepreneurs themselves find ways to “bridge the gap” to include addressing some of the legitimate concerns in India about needing to impose limits on corporate data collection by American technology giants. This means that at least some alignment on privacy issues—though recognizing there won’t be total symmetry—would help the United States and India enormously in multilaterally promoting democratic technology values. It could be that India and United States tech companies find ways to collaborate even if their national governments are not as linked at the moment.

In the focus on US-China technological cooperation, competition, and contestation, it’s vital to not overlook India. India’s growing technology sector, its role as the world’s largest democracy, and its new, emerging model of data governance will continue to shape cloud computing and technology markets. But it is also because US and Chinese tech companies, including in the cloud computing space, are competing for users within the country. As the Indian government’s relations with Beijing change, so too does the landscape of this technological battleground.

Lily Liu (@LilyZimeng) is a senior at Stanford University studying International Relations and Economics. She was an intern at the Atlantic Council’s Cyber Statecraft Initiative.

This article is part of the Digital Crossroads series produced jointly by the Cyber Statecraft Initiative and the GeoTech Center at the Atlantic Council.

Image: A member of National Students' Union of India (NSUI) holds a placard during a protest against China, in Ahmedabad, India, June 18, 2020. REUTERS/Amit Dave