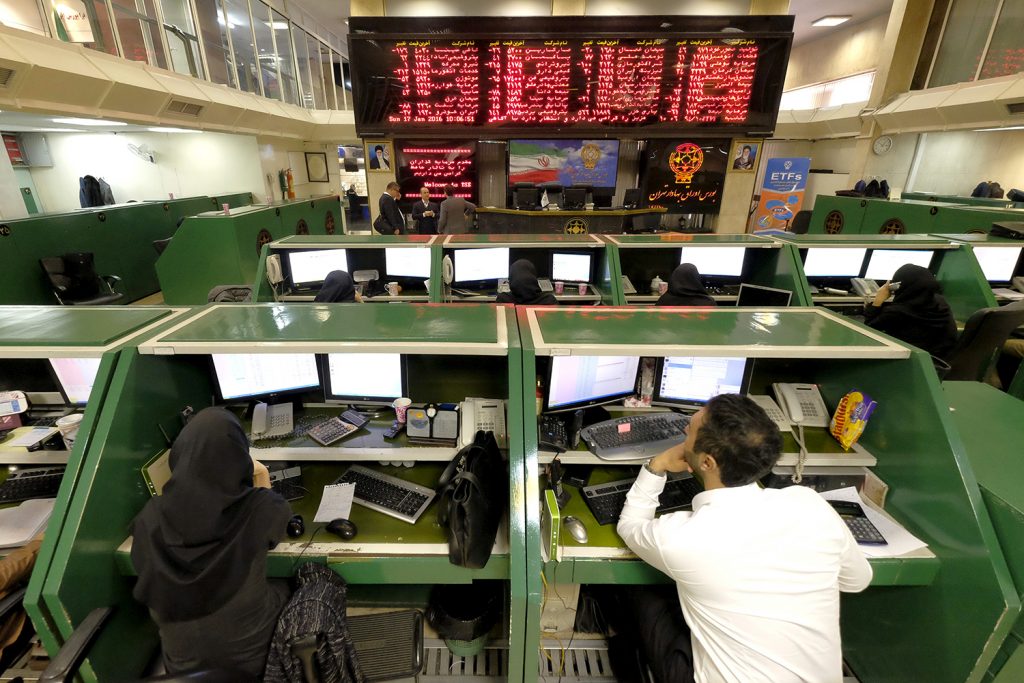 Two years after the US withdrawal from the Joint Comprehensive Plan of Action (JCPOA) and the start of US maximum pressure on Iran, various economic indicators signal the extent of the hardship in Iran. Despite the sanction pressure, the stock market has been recording historic growth. By January 2020, Iran lost nearly 80 percent of oil revenue and $200 billion in foreign income and investments. High inflation (34.8% as of March 2020), low growth (-9 percent in 2019-20), and high unemployment (more than 10 percent by the end of 2019) have put both the population and the policy makers in Iran under immense pressure. The value of the Riyal has continued to decline (to more than 170,000 to $1 in May 2020). Sanctions, mismanagement, and corruption have lowered  confidence in the Iranian economy, drained the country’s foreign reserves, and pushed Iran’s economy into a deep recession.

Despite that, the country’s stock exchange market has been showing remarkable growth recently. The performance in Tehran Stock Exchange (TSE), the country’s largest stock market, that is measured by Tehran Dividend and Price Index (TEDPIX) reached total annual return of nearly 190 percent. In addition, the Equal-Weighted Index that measures the performance of smaller listed companies has recorded 437 percent growth. The current trend in Iran’s stock market begs the question; while every aspect of the Iranian economy is declining, how does Tehran Stock Exchange (TSE) keep recording what President Hassan Rouhani describes as: “the astounding rise” in recent months?

The public reaction to the growth of the stock market has been largely positive. There has been a surge in private investments in the TSE.A large group of TSE investors are the state-owned foundations, government investment organizations, banks, pension funds, and semi-government organizations (e.g. those owned by the Islamic Revolutionary Guards). But over the past two years, the market’s growth has also attracted many ordinary citizens that are in hope of either generating safe and steady income or protecting the value of their life savings.

Inflation, caused by a combination of sanctions and government monetary policies, has had a visible impact on the livelihood of average Iranians. For the past decades, the Iranians have witnessed a rapid decline in the value of their savings, and the purchasing power of their income. Traditionally, in order to hedge the value of riyal assets, foreign exchange (FX), real estate, or gold markets offered safe investment opportunities in Iran. The high returns in the stock exchange market, particularly since the last few months of the previous Iranian calendar year (March 2019–March 2020), has turned this market to the most attractive investment option. From the perspective of an average Iranian citizen, with limited knowledge of macroeconomic issues and restricted access to the information about listed companies, the rise of TEDPIX is what makes this market attractive to a large number of investors. In the country’s current volatile economic conditions, the stock exchange seems to be the safest place to hedge the value of their assets and to protect their livelihood.

8 million Iranians are registered on the STE portal seeking to generate rapid return on their investments in a market that over the past few months has shown a daily 2-3 percent growth. At the same time there is a great deal of skepticism and anxiety over the sustainability of this growth. A local online news platforms, Alef, has referred to the country’s stock market as the “Achilles Heel of the Iranian economy” and warned that if the government does not control the artificial growth, in the hope of reducing the money circulating in the economy, the socio-economic consequences will be devastating.

Given the overall economic conditions in Iran (i.e. low growth, production and consumption) maintaining the growth of the stock exchange will be challenging both for the companies and the government. The scope of growth in the stock exchange is restricted by the current macroeconomic environment in which all the indicators signal a full-scale economic recession; inflation has suppressed purchasing power; and the devaluation of the riyal has shrunk the value of savings. At least half of the listed companies on TSE are engaged in businesses that are linked to energy, agriculture, heavy metals, precious metals, and food sectors. Therefore, they are expected to be affected by, in addition to the ongoing stagnation in Iran, the global trends in those sectors caused by the current global pandemic. Decline in global prices will inevitably have a negative impact on the value of shares of the TSE listed companies, their ability to maintain their balance sheet, report profits and pay dividends.

The government of President Rouhani has failed to deliver his election campaign promises (especially the economic ones). Various episodes of popular uprising that took place in Iran over the past decade have already confirmed that the state-citizens relationships in Iran are weakening and the government’s use of suppression and violence will dominate those relations. The burst of the stock exchange bubble could crush the last smidgen of confidence and hope in the economy and could lead to another episode of socio-economic uprising in Iran.

Iran’s economy and the burden of multiple exchange rates

The importance of the private sector in creating jobs and helping ordinary Iranians survive—in addition to providing communities with required products and services—should not be underestimated.

Five reasons why US ‘maximum pressure’ on Iran has backfired

Sanctions imposed by the Trump administration have contributed to a disastrous contraction of the Iranian economy, but they have failed to alter Iranian policies for the better; indeed, they have made things much worse.

The US administration is proving unmoved by arguments that the severity of the coronavirus in Iran merits a lifting of sanctions. This is for two reasons. Washington believes that the regime in Tehran is leveraging the virus for its own power consolidation, and there is no US political disincentive, domestically or internationally, for keeping sanctions pressure on.