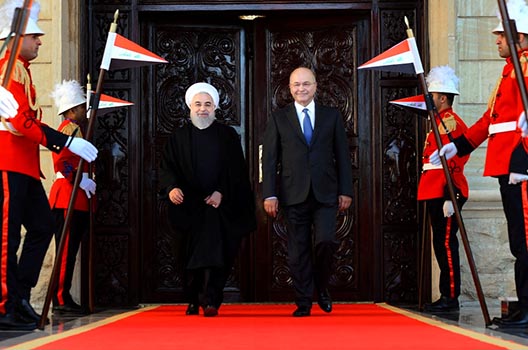 raq's President Barham Salih walks with Iranian President Hassan Rouhani during a welcome ceremony at Salam Palace in Baghdad, Iraq, March 11, 2019. (The Presidency of the Republic of Iraq Office/Handout via REUTERS)

Rising tensions between the United States and Iran are causing grave concern in Iraq. Iraq’s security and political stability will suffer greatly if this tension erupts into a violent conflict. Iraq has only just snatched a difficult victory from the jaws of an existential terrorist threat posed by the Islamic State of Iraq and al-Sham (ISIS) and is coping with post-conflict challenges that range from the reconstruction of destroyed cities—where more than a million internally displaced people are still unable to return to their homes—to the rebuilding of its battered economy and the revival of its energy, agriculture, education, housing, transportation, and healthcare sectors. If a new conflict erupts in the region, it will complicate the situation for Iraq in some unimaginable ways, even if Iraq is not directly involved.

Potential Impacts of a US-Iran Conflict on Iraq

A military conflict between the United States and Iran could halt, or severely reduce, the flow of oil through the Strait of Hormuz, which would disrupt most of Iraq’s oil exports. This would be no small matter as revenue earned from oil exports account for 90 percent of Iraq’s federal budget.

Likewise, Iran’s gas and electricity supply to Iraq could be curtailed. An adequate energy supply is important for preventing destabilizing protests, like the ones that took place in Iraq in the summer of 2018.

In terms of the impact of a conflict on Iraq’s relations with the United States, per its constitution, Iraq would have to declare neutrality in such a scenario. This could force the Iraqi government to ask the United States to withdraw its forces from the country, especially if the pro-Iran political blocs in parliament gather enough support to pass a resolution to that effect.

But is neutrality an option for Iraq? The United States recently evacuated its non-essential diplomatic personnel from the US Embassy in Baghdad and the Consulate General in Erbil, and asked US citizens to leave Iraq or take all necessary precaution while in the country, citing unspecified threats by Iranian proxies. ExxonMobil also evacuated its engineers and other non-Iraqi employees from Basra. If the security situation worsens, other major companies in the energy sector will consider evacuating their work sites, and Iraq will lose precious time to meet its energy targets. Countries that currently train Iraqi security forces or help with post-conflict efforts will also decrease their on-the-ground presence out of fear that Iraq may become unsafe for their employees.

The Iraqi government has a strict non-alliance policy in the region and beyond, mainly in compliance with the Iraqi constitution, but also as a deeply held conviction among the Iraqi leadership. Given the likely pressure of US and Iranian demands that Iraq take a position in any US-Iran conflict, it would be very difficult for the Iraqi government to choose between two important allies. Still, it would be equally problematic to risk alienating both by insisting on neutrality.

US Pressure on Iraq

The United States has already begun applying pressure on the Iraqi government to take an anti-Iran position. On May 7, US Secretary of State Michael Pompeo cancelled a trip to Germany and made a secret visit to Iraq to warn the Iraqi government against any attack on US interests in the country by the Popular Mobilization Forces (PMFs)—an umbrella organization of mostly Shia paramilitary groups. Pompeo also emphasized the need to protect Iraqi sovereignty from foreign interference and strategic dependence on neighboring countries, especially with regard to energy dependence on Iran.

Iraq recently signed a roadmap deal with the German firm Siemens to enhance its electricity supply and distribution while General Electric continues to play a significant role in the Iraqi electricity sector. Although the Siemens deal addresses US demands that Iraq take measurable steps toward energy independence in order to continue enjoying waivers from complying with US sanctions on Iran, the United States would prefer that US companies get the largest share in the contracting. This may happen soon: the Iraqi Oil Ministry recently announced plans to sign a $53-billion energy deal with ExxonMobil and PetroChina.

Looking to the Future: Will the Iraqi Government Finally Take Action on the PMFs?

A conflict involving Iraq’s two allies—Iran and the United States—would shake the foundations of the country’s political equilibrium. If pro-Iran militant groups decide to take part in the fighting, Iraqi territories will become a battleground, and the Iraqi government will have to face a hard choice it has been deferring for a long time: how to confront the unruly elements within the PMFs. That would complicate Baghdad’s calculations as it tries to find a way to bring weapons under government control according to the 2016 Popular Mobilization Forces Law.

Former Iraqi Prime Minister Haider al-Abadi’s government deferred the implementation of this law to avoid a confrontation with the PMFs during the fight against ISIS. It was deferred once again after the defeat of ISIS to avoid a dispute with a popular Iraqi force during the election season of 2018. The new government of Prime Minister Adil Abdul-Mahdi has maintained the same wait-and-see approach.

In the context of Iraqi domestic politics, dealing with the issue of the PMFs has not been a matter of urgency until now. The failure to implement the PMF law may end up being very costly.

Regardless of how the current escalation between the United States and Iran ends, the Iraqi government must maintain sovereignty over the entire country. The presence of unregulated militant groups, insubordinate actors working at the behest of regional and local governments, and untouchable political elites will keep the country in a precarious situation. A crisis such as a regional war will inflame the situation further. Iraqi national interests, as well as the interests of Iraq’s allies, cannot be safeguarded unless the Iraqi government is in full control and the rule of law extends to all aspects of political life.

Abbas Kadhim is a senior fellow and director of the Iraq Initiative at the Atlantic Council. Follow him @DrAbbasKadhim.