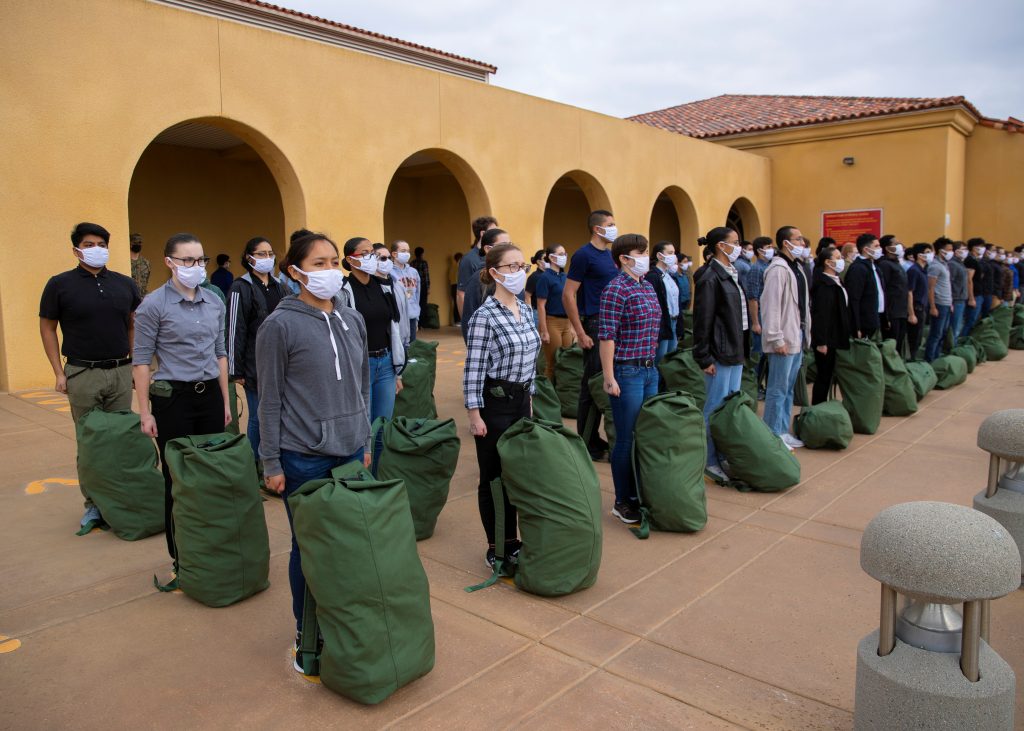 In the $1.7 trillion omnibus spending bill passed just prior to Christmas, Congress approved $858 billion for defense in fiscal year 2023. Yet, despite this large amount of money, for many reasons beyond its control the US military is headed toward becoming a twenty-first century version of the dreaded “hollow force” that plagued the nation after the Vietnam War.

How can this be? And more importantly, what must be done to prevent a hollow force from reoccurring?

Three critical reasons explain why, unless major changes are made now, the US military faces this dire outcome. First, the National Defense Strategy (NDS) is unexecutable because its aims are unachievable. Second, the current force is unaffordable because of uncontrolled real cost growth of every item from precision weapons to people to pencils. Third, the current force size of 1.4 million is not sustainable given the declining cohort of personnel eligible for service and those who wish to serve.

As I wrote last month in The Hill, the NDS is aspirational, not strategic. A combination of uncontrolled real annual internal cost growth of 5–7 percent—due to soaring price tags for personnel and high-tech weaponry—plus inflation as high as 8–10 percent requires an increase in this year’s $858 billion defense budget of $120–140 billion just to stay even next year. According to Pentagon estimates, only 23 percent of young Americans are physically, mentally, and morally qualified to serve. And just one in eleven is interested in joining the military—the lowest number in fifteen years.

Given these realities, what is needed is a National Defense Strategy that is executable, affordable, and sustainable. However, given today’s highly divisive and extraordinarily divided politics, the first obstacle will be gaining consensus on the need for and then the foundations and aims of a new strategy. Unfortunately, one of the few areas on which both parties in Congress agree is the need for more defense spending against a growing and “pacing” Chinese threat.

But more money will not guarantee more defense. Given the cost crisis, spending more on the current course will only bring less military capability. And, so far, the United States has been reluctant to focus on the weaknesses of potential adversaries. With respect to Ukraine the United States greatly exaggerated the prowess of Russia’s military, and chances are that the same misjudgment is being applied to China.

A world of disruption

For much of the post-World War II period, the old MAD of Mutual Assured Destruction has applied as the mechanism for deterring war. However, deterrence has been used too ambiguously beyond averting thermonuclear war, as it has been promiscuously expanded to lesser forms of conflict where it did not apply or did not work. All the nuclear weaponry did not stop the many wars that have been fought since the first A-bomb was exploded at Alamogordo in July 1945.

Today, Massive Attacks of Disruption, whether acts of man or nature, should replace the old MAD as the basis for a strategic framework and strategy. Examples of the disruptive powers of the new MAD are the COVID-19 pandemic and climate change. Neither can be deterred. Here, prevention, containment, and damage limitation—not deterrence—is what matters most.

To implement this strategy will require a far better understanding of what the threat is and what it is not. That means more intensive analysis of the strengths and especially weaknesses of actual and potential adversaries is essential. And in examining the United States’ use of force since the end of World War II, conflicts in Vietnam, Afghanistan, and Iraq in 2003 clearly demonstrated that such analysis has been missing in action.

In a new NDS, the primary aim must be prevention by disruption of any attack, kinetic or otherwise, by imposing such costs on a would-be aggressor to make any aggression too expensive to contemplate. This aim is achievable, feasible, and (with the appropriate forces) affordable. And a proof of concept has been established in how Ukraine has been bloodying the Russian army. This approach must also be highly reliant on allies, partners, and friends—even more so than at present—to raise the costs to potential adversaries.

Part of this strategy entails a Porcupine Defense designed for Europe in closer cooperation with NATO allies. A Porcupine Defense would rely on overwhelming numbers of relatively inexpensive weapons and disruptive systems to devastate an attacking force. To emphasize the strategic value of a Porcupine Defense, had Ukraine been armed with ten thousand drones and fifteen thousand Stingers, Javelins, and other anti-air, -ship, and -armor systems, as well as deception and electronic capabilities, the Russian army would have been eviscerated rather than badly mauled.

The Porcupine Defense could also be applied to Asia and in closer concert with allies as a Mobile Maritime Defense. In the event of a war, China’s military, the People’s Liberation Army (PLA), would be prevented from venturing outside the first island chain—running from Japan and Korea through Taiwan, the Philippines, and Indonesia to Vietnam. Regarding Taiwan, the threat of an opposed entry invasion by the PLA has been exaggerated. That invasion would require a Normandy level of capability of about two hundred thousand troops and six thousand ships and small boats. The PLA is incapable of fielding a force of that size and, more importantly, the amphibious lift for a forcible entry to transit the hundred-mile-wide Taiwan Strait—probably for the long term.

More likely Chinese scenarios vis-a-vis Taiwan include an economic, sea, and air blockade; seizure of small offshore islands; and an internal regime change. An outright invasion should not be considered as the basis for strategy. And the fact that Taiwan is reluctant to adopt a land-based Porcupine Defense as part of the larger Asian mobile maritime strategy should call into question Taipei’s acceptance of the likelihood of an outright PLA invasion.

Meanwhile, beyond confining the PLA to the first island chain, as Japan was blockaded in World War II, a Mobile Maritime Defense would cut China off from access to overseas markets and resources. Part of the strategy would be to roll up China’s Belt and Road outposts as Japan’s island bases were captured or bypassed. And an economic stranglehold would cripple China’s economy and war-making capacity.

A Pentagon that embraces this approach could designate about half of US forces for a Porcupine Defense and a Mobile Maritime Defense, and the remainder for offensive, traditional combined and joint operations, should these be needed. Assuming this configuration for a Porcupine/Mobile Maritime Defense, an active-duty force of about 900,000 to 1 million, down from the current 1.4 million, would be sufficient. The force would be divided in thirds, with 150,000 deployed or deployable troops on each coast of the United States. One tranche would be on active duty, a second preparing for deployment, and the last third in a stand-down status.

An annual defense budget of $650-700 billion, with modest annual increases, would fund this force and prove affordable because it would employ less costly systems and fewer people. And given the eligible personnel cohort, this force can be manned and sustained. Indeed, age requirements for service might be expanded as many of these capabilities for information technologies and unmanned systems would not be so dependent on physical skill sets and youth.

When it comes to strategic forces, the Pentagon must work to understand how a tri-polar nuclear superpower world of the United States, China, and Russia must be addressed in terms of arms control, stability, and defining what is meant by deterring and where it does and does not apply. And more, not fewer or different, strategic forces may be needed. Given costs, this leads to exploring whether air-independent propulsion submarines could augment nuclear-powered ballistic missile carriers. While the new B-21 strategic bomber is impressive, what advantages does it have over stealthy penetrating cruise missiles? And how many land-based intercontinental ballistic missiles will be required?

Given the crises of unaffordability and unsustainable manpower, an interim review is surely warranted. Last year’s flawed NDS was not the answer. Without a new strategic effort, there could be many possible outcomes. But one is certain. In the coming decade, on the current trajectory and without a major course correction, the US military will become hollow and unable to carry out its missions with any confidence. But who will listen? Who will lead? And who will take action?

Harlan Ullman is an Atlantic Council senior advisor and UPI’s Arnaud deBorchgrave distinguished columnist. His latest book is The Fifth Horseman and the New MAD—How Massive Attacks of Disruption Became the Looming Existential Danger to a Divided Nation and the World at Large. He can be found on Twitter @harlankullman. 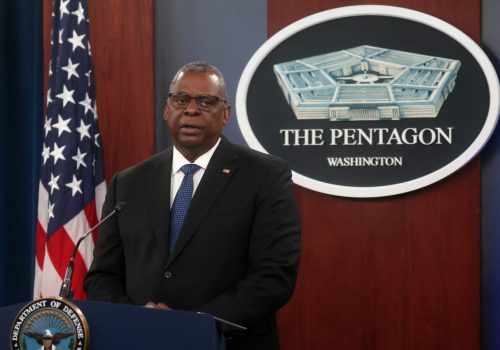 Does the strategy succeed? We turned to our experts to break down the Pentagon's plans. 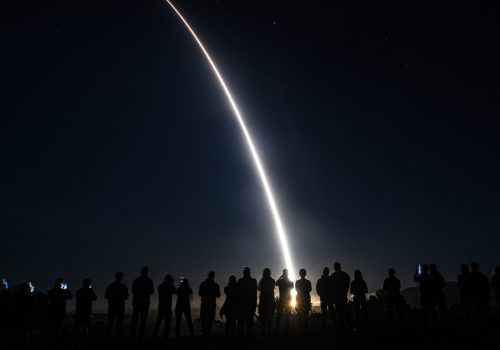 Arms racing under nuclear tripolarity: Evidence for an action-reaction cycle?

Matthew Kroenig argues that there has not been a nuclear arms race since the Cold War—but that China's nuclear buildup might start one. 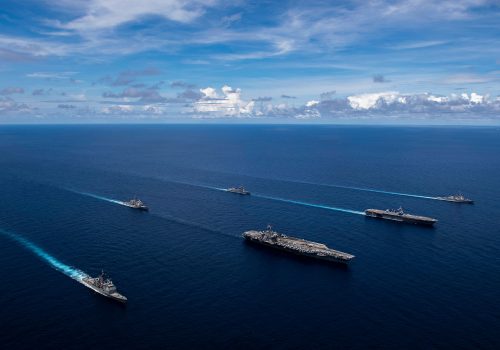 Michèle Flournoy discussed how the United States can maintain a credible deterrent against China in the next decade and beyond as part of the Atlantic Council’s Forward Defense Forum.