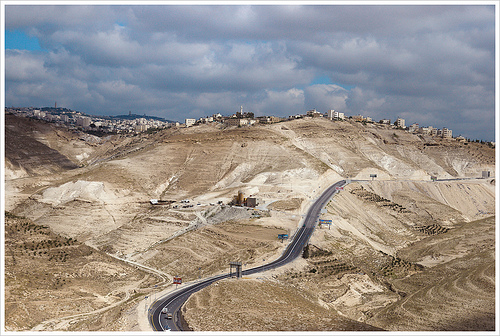 A majority of Israelis recoil in horror at the very thought of emulating the regime of apartheid, a system of institutionalized racial segregation once practiced in South Africa, in the Israeli-occupied West Bank. Yet that is what Israeli Prime Minister Benyamin Netanyahu considers less threatening than full-fledged Palestinian independence.

Apartheid is what gradually emerged in the West Bank under Israeli occupation since Israel’s victory in the Six Day War almost half a century ago.

In South Africa during the Cold War, apartheid was seen as the only effective defense against world communism. And the African National Congress saw the Soviet Union as its best bet for dismantling apartheid and establishing black majority rule.

Netanyahu and his Likud Party allies now view continued Israeli occupation of the West Bank as the lesser of two evils.

The bigger evil is Muslim extremism, ranging from the would-be Muslim Brotherhood dictatorship in Egypt to al-Qaida and its associated movements now gaining ground in Syria’s civil war and already comfortably ensconced in Iraq.

If the West Bank were turned over to Palestinian rule, Israeli hard-liners say Hamas hard-liners would quickly displace the moderate Palestinian Authority, recently elevated to non-voting member status in the U.N. General Assembly.

Today, some 320,000 Jewish settlers live in 132 settlements in the West Bank and another 200,000 moved into East Jerusalem, the two out of three areas Palestinians claim for an independent state of Palestine. Gaza is the third.

One Israeli member of the Knesset predicted that within 10 years more than 1 million Jewish settlers would be living in Palestinian territory, thus making the emergence of an independent Palestinian state well-nigh impossible.

Israel’s West Bank settlements are linked by a network of roads that Palestinians aren’t allowed to use. Israeli troops and police keep Palestinians on secondary roads and dirt tracks.

Netanyahu’s latest decision calls for the building of 3,000 new Jewish dwellings east of Jerusalem. These would sever any land link between the West Bank cities of Ramallah and Bethlehem and what Palestinians see as their future capital.

This didn’t rattle Netanyahu. He has heard it all before and he knows that the U.S. Congress will remain solidly on Israel’s side. Opportunities for direct negotiations to achieve a two-state solution were quashed time and again — with impunity.

Radical Islamists in the Middle East have espoused radical solutions for the creation of a Palestinian state. Iran’s navy is busy testing its mining capabilities for a possible showdown with the United States and Israel.

Iran has repositioned itself to mobilize against an anti-Muslim front if one should emerge.

Fundamentalist-controlled Egypt now threatens to scrap the peace treaty with Israel that returned the Israeli-occupied Sinai Peninsula to Egypt after the 1973 war. The treaty guaranteed the demilitarization of Sinai.

Hezbollah in Lebanon and Hamas in Gaza, north and south of Israel, are mortal enemies of the Jewish state. Syria, another hostile neighbor, appears to be falling prey to pro-al-Qaida extremists.

For Israel, it’s not rocket science to conclude it is surrounded by self-proclaimed enemies. In the Israeli-occupied West Bank, Hamas is gaining in popularity, especially among the youth, against a moderate Palestinian Authority.

But Hamas in Gaza is also fearful of being outflanked offline by Salafist and Jihadist groups in Egypt.

Israel’s hard-liners are convinced that an independent Palestinian state in the West Bank would quickly fall prey to a panoply of extremists who would look to the Mediterranean Sea as Palestine’s new/old frontier — and a burial ground for all Jews.

Thus, for Israel’s hard-liners, continued occupation of the West Bank is the lesser of two evils.

It is hard for an Israeli policy planner to be optimistic about the outcomes of the Egyptian, Syrian, and Libyan revolutions.

Russia has also returned to the Middle East, backing the Assad regime in Syria and signing a large arms deal with Iraq, where the U.S. taxpayer spent $1 trillion on an ill-thought-through war that made Iran the dominant influence in Baghdad.

Sharply curtailed were plans for the largest and costliest ($1.2 billion) U.S. Embassy in the world in Baghdad.

As Russia regains influence in the region, it will hopefully persuade the religious zealots in Iran to shelve their nuclear weapons plans.

There is one critically important lesson the United States and its European and Asian allies should have learned in a chaotic Middle East: Arabs and Persians aren’t interested in Western models of democracy.

How to bring democracy to them isn’t the problem. How to deal with a different system is the crux of the geopolitical dilemma facing the second Obama administration.

Arnaud de Borchgrave, a member of the Atlantic Council, is editor-at-large at UPI and the Washington Times. This column was syndicated by UPI.. Photo credit: Flickr user Libertinus.