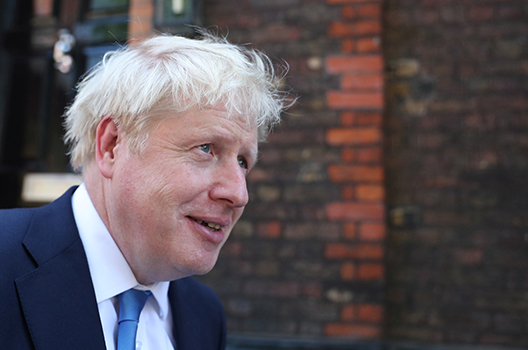 Boris Johnson will now take his turn at trying deliver the United Kingdom’s exit from the European Union (EU), as he was elected on July 23 to replace British Prime Minister Theresa May as leader of the Conservative Party. Johnson, who previously served as UK foreign secretary and mayor of London, will be named prime minister on July 24, replacing May who resigned on May 24 after being unable to get parliamentary support for her Withdrawal Agreement with the European Union.

Johnson, an outspoken supporter of Brexit, campaigned for Conservative leader on his ability to deliver Brexit by the October 31 deadline agreed to by the UK and the EU in April. “We are going to get Brexit done on October 31 and take advantage of all the opportunities it will bring with a new spirit of can do,” Johnson said on July 23.

Outgoing prime minister May saw her Withdrawal Agreement, which was rejected three times by the UK Parliament—a body that remains divided among hardcore Brexit supporters, opposition parliamentarians who oppose the UK’s exit from the EU, and Conservative party members who had backed May’s plans. The critical issue of maintaining an open border between the Republic of Ireland and Northern Ireland without United Kingdom remaining in the EU’s single market and customs union continues as a major sticking point for the UK Parliament, with May and the EU’s proposal of a “backstop” rejected by hardcore Brexit supporters and Unionists in Northern Ireland. The plan—which would have required Northern Ireland to remain in the EU’s single market in the event that the UK and the EU did not agree on a permanent free trade agreement—was criticized for potentially requiring border checks between Northern Ireland and the rest of the UK.

Johnson has maintained that he would try to get the EU to renegotiate the Withdrawal Agreement before October 31, using the threat of leaving without a deal on October 31 and potentially withholding the $50 billion “divorce payment” the United Kingdom owes the EU after Brexit as leverage.

Damon Wilson, executive vice president of the Atlantic Council, argued that Johnson’s “task is to deliver Brexit in a way that keeps the United Kingdom united, preserves the EU’s role as London’s closest natural partner on so many issues, and ensures the special relationship with the United States remains relevant.”

Despite Johnson’s insistence that renegotiation is possible, “it is unlikely that the EU will budge, [except] at the margins,” according to Benjamin Haddad, director of the Atlantic Council’s Future Europe Initiative. “EU leaders have made clear they won’t compromise on the core principles of the common market and want to prevent the reinstatement of a hard border in Ireland,” he explained. Michel Barnier, the European Union’s head Brexit negotiator tweeted on July 23 that he looks forward to working with Johnson “to facilitate the ratification of the Withdrawal Agreement and achieve an orderly Brexit.”

While Johnson may believe that the credible threat of a no-deal Brexit on October 31 will force EU leaders to reopen discussions on the Withdrawal Agreement text, Haddad noted that EU leaders “have made clear the October deadline, which corresponds to the new term for the European Commission, will be final. It doesn’t look like a bluff.”

Speaking at the Atlantic Council last week, Dutch Prime Minister Mark Rutte said that “for too long now the political debate in the EU has been dominated by Brexit.” Rutte advocated that European leaders acknowledge that “sadly there is no way back.” Other European leaders such as French President Emmanuel Macron also share Rutte’s belief that an end to the Brexit saga—even if it means no deal—is better than an extension of the years-long drama, Haddad explained, making it clear that “the balance of power is tilted toward the EU.”

It has been a long road to Downing Street for Johnson, whose national profile as mayor of London and foreign secretary made him an often-discussed prime minister candidate, according to Peter Westmacott, a distinguished ambassadorial fellow in the Atlantic Council’s Future Europe Initiative and former UK ambassador to the United States, France, and Turkey. “His characteristic bluster and breezy optimism have brought him a long way,” Westmacott explained. He also noted that Johnson has finally succeeded in gaining the post “despite many occasions over the years when it looked as if he had blown his chances.”

Andrew Marshall, vice president of communications at the Atlantic Council, observed that Johnson “has wit, charm, intelligence, and political instinct. He could, if he so chooses, be a great prime minister.” The new prime minister will need to “transcend his own personal weaknesses, the country’s deep divisions, and the apparently insoluble issue of Brexit,” Marshall added, or else “he will fail as surely as his predecessor.”

Brexit in particular will “test not only [Johnson’s] rhetorical skills, but also his patience and his ability to supervise and coordinate the vast range of governmental activities that are a UK Prime Minister’s lot,” Atlantic Council nonresident senior fellow John Roberts said.

In addition to the Brexit dilemma, Johnson will need to lead the Untied Kingdom’s response to Iran’s seizure of a British oil tanker in the Strait of Hormuz and address “the fragile state of the country’s economy and social services,” which have been neglected by the singular attention on Brexit, Westmacott explained.

“The challenge for the new prime minister will be to show that he can succeed in these difficult areas where he has no track record of success and which have so far defeated others,” Westmacott said. Unable to reach a solution amid the Brexit chaos, Theresa May claimed she was forced “to give up the job I love earlier than I would like.” If Johnson is to avoid her fate, he must quickly find a way forward along an increasingly uncertain Brexit road.

Image: Boris Johnson is seen outside his office after being announced as Britain's next Prime Minister in London, Britain July 23, 2019. (REUTERS/Hannah McKay)