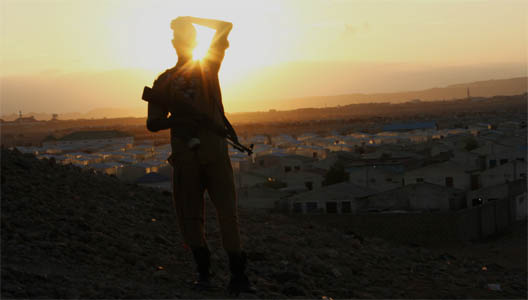 A government soldier watches over a town at sunset. (Photo: UNHCR Somalia/Flickr/CC License)

One year ago the Obama administration broke with the Somalia policy of its three predecessors by according diplomatic recognition to the government of the Federal Republic of Somalia. Last month, in his annual Worldwide Threat Assessment report to Congress, Director of National Intelligence James Clapper bemoaned that the Somali regime’s “persistent political infighting, weak leadership from President Hassan Sheikh Mohamud, ill-equipped government institutions, and pervasive technical, political, and administrative shortfalls” provided an opening for al-Qaeda-linked al-Shabaab militants to continue targeting Western interests. Indeed, Mohamud’s regime is itself perhaps the greatest obstacle to security and progress in the Horn of Africa, and the most effective US policy on Somalia would begin by reversing the decision to recognize it.

But in the world of Washington decision making, policy reversals that appear to concede significant errors of judgment are seldom made quickly. Even though the latest Somali government has proven to be as feckless and corrupt as its predecessors, the US administration is unlikely to abandon it as an object of state building until it completes its current spiral into collapse. Still, policymakers should do what they can at the margins to back America away from this failed choice and require all Somali actors to earn their engagement by the United States through their performance.

In this strategy of “earned engagement,” the international community would engage Somali actors instrumentally, offering its traditional clans, civil society organizations, regional authorities and government entities (including those of the de facto independent Republic of Somaliland and the autonomous Puntland State) equal-opportunity access to international resources—but only to the extent that they meet benchmarks of effectiveness. (Africa Center Deputy Director Bronwyn Bruton and I laid out this approach in detail in a 2011 Foreign Affairs article.)

The current state-building attempt in Somalia, only two years old, unfortunately was vitiated almost from the start. At the London Conference on Somalia hosted by British Prime Minister David Cameron in February 2012, the international community opened a complicated process whereby Somali elders, representing the clans and sub-clans which remain the permanent framework of Somali society, were to pick a broadly representative constituent assembly. That assembly was then to prepare a constitution and give way to a parliament, which would elect the president.

But many of the “elders” chosen to begin the process were not elders at all. A vetting process, meant to weed out puppets of militia strongmen as well as those with a history of violence or who lacked basic literacy, was predicated on Somalia’s political rivals serving as a check on each other. Instead, the strongmen put aside their differences and colluded to pack the conference of elders. A senior Africa Union official confided to me in the summer of 2012 that “at least 40 percent” of the supposed elders had no legitimacy as such. Subsequently, it was widely reported, by The Economist among other sources, that these phony representatives turned around and sold seats in the new 275-member parliament for as much as $25,000 each.

When the new legislature convened on September 11, 2012, under the protection of African Union peacekeepers at the Mogadishu airport, the widely-discredited incumbent president of the outgoing Transitional Federal Government, Sharif Ahmed, won the largest number of votes, falling just shy of the majority needed for another term in office. According to well-sourced media reports at the time, what may have caused his loss in the subsequent round of balloting was his own greed: he was reportedly given $7 million dollars from Gulf sources to buy his reelection and yet, until the desperate second round of the vote, doled out stingy payments in the $10,000 range to the electors. When parliament members learned the sum he actually had at his disposal, many turned against him and threw their support behind a dark-horse candidate, Hassan Sheikh Mohamud, a civil society activist with close ties to the (relatively) moderate  Islamist movement al-Islah (“Reform”).

In less than eighteen months since then, this government has gone through two prime ministers and countless cabinet reshuffles. Given the brief tenures they can expect to hold, senior government officials largely view their appointments as opportunities for self-enrichment and other corruption before they are forced to move on.

One of few high-ranking officials with a reputation for probity, Central Bank Governor Yussur Abrar, a US citizen of Somali origin who had had a successful career in international banking at AIG and Citigroup, was forced to resign in late 2013 after less than two months in office because she refused to go along with persistent corruption in the president’s office and would not sanction a questionable contract pushed by the president and foreign minister. In what UN Special Representative for Somalia Nicholas Kay described as a “body blow” to donor confidence, Ms. Abrar fled Mogadishu fearing for her safety and submitted her resignation after landing in the United Arab Emirates.

“Systematic abuses” by the Somali regime have allowed weapons for government forces to be diverted to warlords and al-Shabaab militants, according to the United Nations’ Monitoring Group for Somalia and Eritrea. Evidence assembled by UN experts indicated that advisors of President Mohamud have helped plan weapons deliveries to both Islamist militants and criminal gangs.

Militant violence continues regularly throughout Mogadishu and other cities, including some of the most heavily fortified areas. A car bomb exploded at the gate of Mogadishu’s international airport February 13, killing six people. On February 21, militants attacked the presidential palace with a car bomb and gunfire, leaving at least eight people, including two government officials, dead before they were driven off. Artillery shells fired from outside the capital during the day, and sustained night-time attacks with mortars and gunfire, are regular features of life.

Merely reporting these problems has become dangerous. The government repeatedly has attacked the independent Shabelle Media Network, winner of the 2010 Reporters Without Borders Press Freedom Prize. It has withheld a broadcast license to Radio Shabelle, which operated for a decade before the current regime came into being. In October, the Interior Ministry ordered the company to vacate its premises (which not only house its studios, but also serve as a safe haven for journalists, several of whom have had their homes destroyed by al-Shabaab terrorists). One week later, government forces stormed the building, beating and arresting some three dozen journalists and other employees, and confiscating and destroying broadcast equipment. The most recent World Press Freedom Index, released by Reporters Without Borders, ranks Somalia ranks 176th out of 180 countries in the freedom of information.

In the two decades between the collapse of the Siad Barre dictatorship in early 1991 and the inauguration of the current regime in late 2012, Somalia has seen no fewer than fifteen attempts by outsiders to install a central government. While the United States never formally severed relations with Somalia, neither did it officially recognize any entity as the country’s de jure government. The ambiguity of that policy gave considerable freedom for America to advance its security objectives and those of its allies without the constraint of a regime that was at best a notional sovereign.

More than one year after the surprise decision to recognize the government, the US has opened no US diplomatic representation in Somalia, nor nominated even a non-resident chief of mission. In March last year, as Johnnie Carson ended his tenure as assistant secretary of state for African affairs, he singled out the “remarkable progress” in Somalia and South Sudan  as the principal achievement of his four years in office. (South Sudan subsequently has seen the outbreak of a civil war that has left more tens of thousands dead since mid-December.) One cannot help but conclude that the recognition of the Somali government was largely political theater detached from reality. On the ground, the regime’s lack of popular legitimacy has undermined the progress made by the African Union Mission in Somalia (AMISOM) and others towards defeating the challenge of al-Shabaab once and for all.

It is high time that the US and other countries stop trying to pick winners and losers in Somalia’s internecine conflicts—not that they ever had much success in that endeavor—and let proven effectiveness and legitimacy that flows from really governing (as opposed to merely mimicking the external trappings of a state) determine who deserves to be recognized.