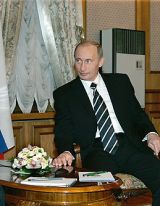 Not much unites former Ukrainian Prime Minister Yulia Tymoshenko, currently serving a 7-year prison sentence, and the man who put her there — and won’t release her — Ukraine’s president, Viktor Yanukovych. Yet, each tells a similar story of humiliation and debasement in their dealings with Vladimir Putin.

For Yanukovych, it was the way Putin spoke to him in the crass vernacular of a thug to emphasize the disdain he had for Ukraine’s independence. For Tymoshenko, whose recounting of the story made her visibly upset, it was the way he referred to Ukrainians as “slaves.”

Despite years of this type of treatment, both have struck deals with Putin that betrayed their nation’s interests. Yanukovych’s recent rejection of a European Union offer that would have put Ukraine on a path of economic growth and political reform was only the most jarring in a series of regional decisions made under Russian pressure. And Tymoshenko’s 2009 gas deal with Putin amounted to national extortion, leaving economically struggling Ukraine paying exorbitant prices. Yanukovych’s latest crackdown on peaceful protestors in support of a European Ukraine only solidifies Putin’s bear hug embrace of Ukraine.

Putin’s alpha male diplomacy binds personal humiliation, threats to cripple the economy, and the use of force to intimidate Russia’s neighbors. The threats are precise: bans on key imports, mass deportation of labor migrants, energy cut-offs during the most frigid weeks of winter. Keeping his neighbors weak and compliant makes them unreliable partners for Europe and the United States, and puts them just where he wants them.

Which is what has just played out at the EU’s Eastern Partnership summit in Vilnius during which Armenia and Ukraine caved to Russian pressure and reversed their intention to pursue deeper integration with Europe. Belarus and Azerbaijan have remained on the sidelines. For now, Georgia and Moldova continue to resist pressure and opt for a European future. But for how long?

Armenia was the first to succumb to Putin’s bullying. Faced with Moscow’s threat to sell arms to Armenia’s rival Azerbaijan, combined with the guarantee of cheap energy, President Serzh Sargysan abandoned Armenia’s EU bid and opted for the Russia-led Customs Union. His nation was shocked — and the Kremlin website gloated.

Putin outlined a series of sticks and carrots to Yanukovych to ensure the Ukrainian president also got the point: strict border inspections leading to heavy commercial losses, bans on chocolates and other goods (produced by pro-Europe oligarchs), and the threat of burgeoning energy prices drove home the message.

In authoritarian Belarus, Putin has sought to deter any rapprochement with the EU by tightening Russia’s grip through control of Belarus’s lucrative potash company and using energy as a weapon.

Now Putin’s sights are firmly fixed on the two tiny nations that have dared stand up to his bullying: Moldova and Georgia.

Russia began by expelling Moldovan workers, while rejecting imports of Moldovan wine and agriculture for failing to meet health standards. To ratchet up the pressure, Moscow is increasing its financing of Moldova’s breakaway region of Transnistria, with Deputy Prime Minister Dmitri Rogozin declaring ominously that, “Moldova’s train en route to Europe would lose its wagons in Transnistria.” He continued, “The cold season is near, winter is on its way; we hope that you will not freeze this winter,” pounding the message home in a nation completely energy dependent on Russia.

Despite the efforts of a new government in Georgia to normalize relations with Moscow, Russia has begun erecting fences making permanent the unrecognized “border” separating Georgia from its breakaway regions of Abkhazia and South Ossetia.

While the EU has been clear that its offer of political and economic integration is not aimed at Russia, both the EU and US have greatly underestimated Putin’s commitment to controlling his neighborhood.

As Europeans consider their next steps after last week’s Vilnius summit and Ukraine’s crackdown, the United States and Europe have an opportunity to work with governments and societies in the region to prevent a Russian-orchestrated rollback of freedom’s gains. The EU deserves kudos for its Eastern Partnership initiative to encourage reform and integration in Europe’s East. But without US leadership and engagement, Putin might succeed in creating a new dividing line in Europe.

The United States has kept considerable distance as Putin snuffed out democracy in his own country, but it can take some immediate steps to check his latest efforts to intimidate his neighbors. A good first step would be a joint US-EU plan to counter Russian efforts to undermine Moldova and Georgia and stepped up assistance to Ukrainian civil society, followed by along-term transatlantic strategy to support the sovereignty of nations in Europe’s East. Secretary Kerry’s visit to Moldova sends a hopeful signal that Washington now recognizes what is at stake and might be willing to flex some muscle to put former Soviet nations firmly on European political and economic terrain.