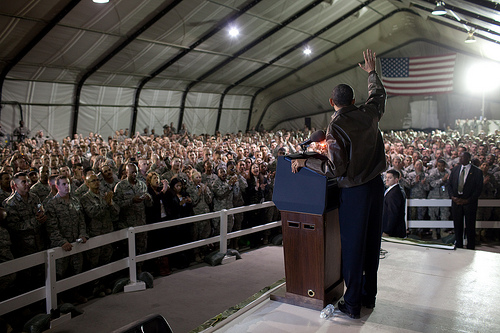 The shadow of North Korea’s latest provocations for the moment has obscured Iran and its nuclear ambitions. Another war on the Korean Peninsula would be a disaster for the Korean people even though the military defeat of the North that is sure to follow would no doubt end the Kim ruling dynasty.

That said, Iran remains a smoldering issue which, unlike North Korea, isn’t posturing itself for war.

Any decision to use military force against Iran has been deferred thanks to U.S. President Barack Obama’s successful visit to Israel last month. But herein rests a familiar lament for U.S. policy: making war for the wrong reasons. Of course, if North Korea attacks first, we have no choice but in choosing to make elective war, perhaps the United States has a defective gene in its national DNA.

Fifty years ago next year, Lyndon Johnson used the pretext of the Gulf of Tonkin incident for a de facto declaration of war against North Vietnam. A local naval commander ordered his patrol boats to attack USS Maddox on the mistaken assumption that the destroyer was abetting a clandestine naval raid against North Vietnam, about which Maddox was completely unaware.

Some 60,000 American and many more Vietnamese lives were lost in the quest to bear any burden and pay any price to defend freedom as President John Kennedy promised in his inaugural address in January 1961. Tragically, Johnson took that commitment too seriously. America blundered into what became the Vietnam quagmire.

Thirty-nine years after the Tonkin Gulf episode, President George W. Bush launched his war into Iraq for the purpose of removing Saddam Hussein who, CIA Director George Tenet said, not only had links with al-Qaida, it was a “slam dunk” that Saddam had weapons of mass destruction. That was reiterated by Vice President Dick Cheney who frequently asserted Saddam had nuclear bombs.

Almost midway between these two wars, the Reagan administration intervened in Grenada in late October 1983 following a military coup in which Prime Minister Maurice Bishop was killed. The arguments for the military invasion were fear of a Cuban/Soviet takeover of the island and specifically the building of a 9,000-foot runway from which Soviet aircraft could threaten America’s East Coast. The pretext was assuring the safety of U.S. students attending the island’s St. Georges’ medical school from capture or worse at the hands of the Cubans or new government.

The assault came just after the Marine Barracks in Beirut was blown up and 241 Marines killed. After the invasion was under way, the commander, Vice Admiral Joseph Metcalf, repeatedly and understandably was asked about the safety of the students, which was his top priority, crisply responded to Washington that none was in danger and thus there was little urgency in getting forces to the medical school before securing the island.

Worse, the strategic runway had been under discussion for decades as a tourist magnet and the prime contractor was the British firm Plessey whose owners were fiercely anti-Soviet and highly capitalist employing the cheapest Cuban labor.

Operation Urgent Fury was a near disaster underscoring the inability then of the four U.S. military services to operate together. Fortunately, that flaw was corrected but the invasion was based on mistaken judgments.

What about Iran? First, assuming Korea quiets down, Obama would be well advised to revisit why the U.S. blundered so badly in Vietnam and Iraq the second time, arguably the two greatest foreign policy misjudgments in its history. Grenada offers further evidence of gross misjudgment in the rush to use military force even though it was a sideshow.

Some will argue that Vietnam and Iraq were largely intelligence failures. While intelligence did fail, responsibility, culpability and accountability fell centrally on the White House and the president. The truth was either not relevant or expediently manipulated for cynical political purposes.

In Vietnam, as Johnson famously argued, communism had to be halted on the Mekong and not the Mississippi once the Asian dominoes fell. Unlike the first Iraq war when Saddam had invaded a neighbor and had to be evicted, the raison d’etat was democratization of Iraq that would change the geostrategic landscape of the Middle East. Saddam’s links with al-Qaida and the certainty of his stocks of WMD were fabrications for war.

It is seductive to make the case to disarm Iran of its nuclear capacity. The ayatollahs are irrational and cannot be trusted. A Shiite bomb will beget a Sunni weapon. The region will be destabilized. And Iran’s radicalism will spread.

Iran may indeed have nuclear aspirations. After all, what is the best way to deter the United States, the West and Israel all of whom have nuclear weapons? Yet, history repeatedly demonstrates American vulnerability to a rogue gene in getting it very wrong. Mr. President, we hope you are listening.