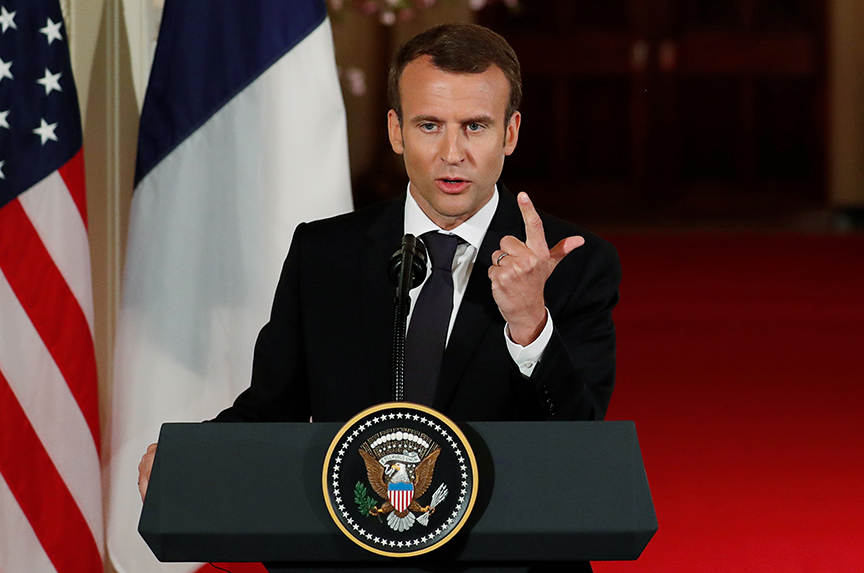 French President Emmanuel Macron said on April 24 that he wants to work on a “new deal” with Iran that would retain the 2015 nuclear agreement as a primary pillar.

US President Donald J. Trump, standing alongside Macron at the White House earlier on April 24, called the JCPOA “insane.” Trump has set a May 12 deadline for the United States’ European partners to “fix” the deal. He has repeatedly held out the possibility of walking away from an agreement that he does not consider satisfactory.

In a joint press conference with Trump, Macron spelled out the four pillars of a plan for a new deal with Iran.

1)    Severely curb Iran’s uranium enrichment program until 2025, which Macron said the JCPOA does. “For a number of months, I’ve been saying that this was not a sufficient deal, but that it enabled us, at least until 2025 to have some control over their nuclear activities,” Macron said of the JCPOA.

“I constantly said that we needed to find the framework so that together, and with the powers of the region, and with the Iranian leaders, [we] manage to find a deal,” said Macron. “I, therefore, would like us to commit to that effect in the weeks and months to come.”

What will Trump do?

Trump did not say whether he would re-issue sanctions waivers on Iran on May 12, but suggested that he had confided his decision to Macron.

“We can change and we can be flexible. In life, you have to be flexible,” Trump concluded.

What will France do?

Will Macron be able to rally other European partners in the JCPOA—Germany and the United Kingdom—around his four-pillar plan?

What will Iran do?

Iranian Foreign Minister Javad Zarif has, in the past, accused European countries of appeasing Trump.

The Atlantic Council’s Barbara Slavin writes in a blog post for the New Atlanticist that Zarif recently told reporters that it was “highly unlikely” that his country would remain in the JCPOA if Trump decides to ditch the agreement.

In a tweet on April 23, Zarif wrote: “European leaders should encourage President Trump not just to stay in the nuclear deal, but more importantly to begin implementing his part of the bargain in good faith.”

Image: “France is not naïve when it comes to Iran,” French President Emmanuel Macron said at a joint press conference with US President Donald J. Trump at the White House in Washington on April 24. (Reuters/Jonathan Ernst)