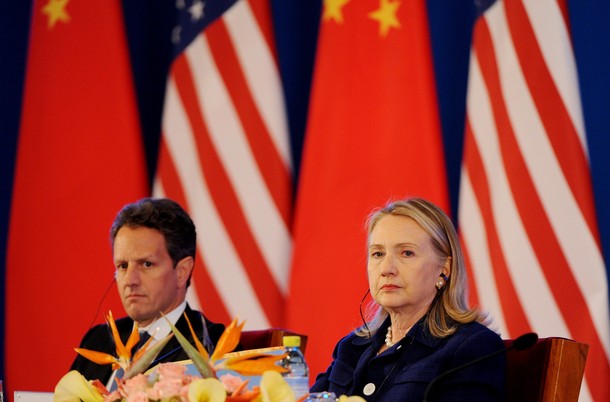 Former US Secretary of State Dean Acheson once famously remarked that Britain had lost an empire but had not yet found a role. Sadly, many years later London’s strategic bankruptcy means Britain is still searching, but what of the US? Nothing that has happened of late suggests an America that is thinking hard about how it will lead in the big, brave and dangerous world which is about to emerge from behind the mask of two wars and a sub-prime economy. Is America losing the will to make grand strategy?

On the face of it President Obama’s rather unconvincing commitment this week to “finish the job” in Afghanistan, China’s rather brusque rejection of American attempts to finesse the human rights of one Chinese activist and Hilary Clinton’s rather stuttering ‘big issues’ visit to Beijing are only tangentially connected.

In fact the US needs Chinese support to get out of Afghanistan if it is to retain even a modicum of strategic honour. However, the price Beijing will exact from Washington for helping engineer a modicum of stability in Afghanistan’s post-American space will be high. In spite of the sacrifice of Western soldiers and the huge amounts of Western taxpayer’s money that has been poured into Afghanistan this past decade it is China that will extract Afghanistan’s high-value natural resources. Beijing will also expect less criticism of its human rights and Chinese mercantilism. However, the real prize for Beijing will be geopolitical; it is China that post-2014 could well define stability in Asia if the US is seen to give too much ground.

Tellingly, Hillary Clinton’s visit to Beijing was not the big news this week; that looked too much like a hard-pressed American administration seeking Chinese favors in election year. The big news was the treatment of Chen Guangcheng – by both Beijing and Washington. America remains the natural beacon for those Chinese discontent with the ‘we will make China powerful but do not question how’ deal the post-Tiananmen Communist Party has long offered its people.

Afghanistan? For all this week’s talk of strategic partnership one year on from the killing of Osama bin Laden Afghanistan is old news in American politics. President Obama promised to get America out of two contentious wars in Afghanistan and Iraq prior to November’s presidential election. His two exit strategy is on track, if not on time.

So, for all this week’s rhetoric America is beating a strategic retreat. If that political retreat leads to a new global balance of power that is not ‘made in America’ Asia and much of the world beyond will come to reflect Chinese interests rather than American values. The rest of us will be forced in time to occupy the sodden, swampy quicksand in between. Such a world would take on the appearance of nineteenth century Europe – a cold, hard place in which change is driven by the narrow interests of narrow, cynical elites. Absent American strategic leadership India will be forced to treat with China as the dominant regional power; Japan will be forced to look to itself for security and what price Taiwan?

The Washington-Beijing axis will be the defining power relationship of this age. However, Washington must be careful not to sell its soul in pursuit of such a relationship. Beijing must be held to account and prove it is prepared to work for such a relationship. How China treats its citizens should be as important to Washington as the fashioning of power balances. Indeed, the critical balance in American strategy is the one between values and interests that has defined American leadership and must continue to do so. Therefore, Washington must look up from the Afghan trench into which it has fallen, overcome its palpable strategic exhaustion and begin a bipartisan effort to consider America’s new leadership challenge in the post Osama bin Laden world.

As a Briton I can on occasions find the Americans irritating. Much of that I put down to my jealousy as I watch my once proud country decline into irrelevance. However, the plain truth is that a just world needs a posturing, irritating, big-mouthed, big ideas America. If America becomes just like the rest of us then the world will be far the worst for it. If a Beijing-placating US henceforth merely mouths human rights platitudes the battle for ideas will be over before it has begun and Americans will have vacated their ‘shining city on the hill’ to join the rest of us on the muddy plains of power and weakness.

It was of course Churchill who made that famous quip about one being able to rely upon the Americans making the right decision, but only after every other option had been exhausted. I am beginning to wonder.

Is America losing its strategic mojo? If it is twenty-first grand strategy will be made in China.