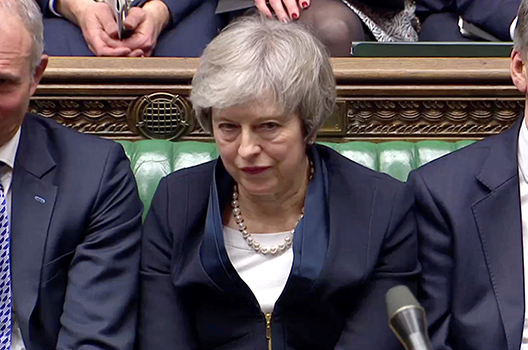 A little over two months remain until the United Kingdom is to leave the European Union (EU) and yet the manner of Britain’s exit seems more unclear than at any time since the 2016 Brexit referendum.

The UK Parliament on January 15 rejected by a vote of 432 to 202 the Withdrawal Agreement British Prime Minister Theresa May negotiated with the EU.

“This is a breathtaking defeat for the government’s strategy,” Atlantic Council Vice President of Communications Andrew Marshall said. “But it isn’t clear that there is a solution in sight, or another strategy. . . Effectively there is a vacuum in British politics: a giant empty place where authority and government should be, that no one else can fill.”

May’s deal is now “now dead in the water,” said John M. Roberts, UK-based nonresident senior fellow with the Atlantic Council. “There is no precedent for a government losing such a vote on a major issue by anything like this margin without the prime minister resigning or calling a general election,” he explained.

Speaking after the vote totals came through, May said: “It is clear that the house does not support this deal.”

“But this vote tells us nothing about what it does support,” she continued. “Nothing about how or even if it intends to honor the decision the British people took in a referendum Parliament decided to hold.”

“The ball is squarely back in the Commons’ court,” said Bart Oosterveld, director of the Atlantic Council’s Global Business and Economics Program. “There is no majority for anything remotely resembling the negotiated Brexit plan. In the absence of new elections, a hard Brexit at the end of March seems increasingly likely,” he said.

In order to move forward, May said, “First we need to confirm that this government still enjoys the confidence of this house. I believe that it does but given the scale and importance of this vote tonight, it is important that others have the chance to test that question if they wish to do so.”

Should May survive the no-confidence vote, she will need to come up quickly with a Plan B. Although May argued that a January 9 amendment compelling the government to produce a new set of proposals for a withdrawal agreement within three business days “is not legally binding,” she said she would honor that wish and come forward with a statement on the path forward by January 21.

There was a potential foreshadowing of May’s thinking on a “Plan B” as Conservative member of Parliament, Edward Leigh, dropped a planned amendment on January 15 that would have insisted that the Irish border backstop included in May’s deal would “only be a temporary arrangement,” and force the UK to “terminate the Withdrawal Agreement by 2022 if no new relationship is agreed.” May responded that she could not endorse that amendment but promised that she would work for “creative solutions” to that issue. May could now attempt to see if she could get a political commitment from the EU to label the backstop a “temporary agreement,” or agree on a firm end date for the Withdrawal Agreement.

European Commission President Jean-Claude Juncker and European Council President Donald Tusk maintained in a letter to May on January 14 that “if the backstop were nevertheless to be triggered, it would only apply temporarily, unless and until it is superseded by a subsequent agreement that ensures that a hard border is avoided,” continuing a constant Brussels position that the backstop will remain only until a permanent arrangement between the EU and the UK is decided.

Another alternative for May could be “to ask for an extension of Article 50 to allow time for inter-party consultations around some alternative kind of Brexit,” said Peter Westmacott, Atlantic Council distinguished ambassadorial fellow and a former British ambassador to the United States. Article 50 is the provision in the Treaty of the European Union outlining the process for leaving the Union, which if delayed would prevent the UK from crashing out of the EU on March 29 without a deal. “But the EU has been clear that it won’t extend the deadline beyond 29 March without a clear reason such as the negotiation of a customs union (which Theresa May has so far ruled out but would provide business with a degree of certainty) or the organization of a fresh referendum to break the deadlock,” Westmacott explained.

The issue of the Irish backstop—a provision to be implemented should the EU and the UK fail to agree to preserve the open border between Northern Ireland and the Republic of Ireland—has been the largest sticking points both for hardline Brexiteers in the Conservative Party and May’s coalition partner the Democratic Unionist Party (DUP) from Northern Ireland.

“The scale of the vote has diminished” May’s options, Roberts said. “She can no longer realistically envisage making a further appeal to Brussels to improve the agreement she concluded in November, since the kind of cosmetic changes that Brussels might be prepared to make would not satisfy her critics.”

May attempted to downplay concern about the possibility that the backstop could keep the UK—or at least Northern Ireland—under the power of EU rules should economic negotiations drag on for years. “The key thing to remember,” the prime minister said “is that this isn’t a commitment that we are making to the European Union, it is a commitment to the people of Northern Ireland and the Republic of Ireland that they will be able to carry on living their lives as they do today. It is about saying that whatever happens when we leave the EU, we will honor the Belfast agreement.”

The uncertainty around Brexit and the future of the UK-EU relationship will also have significant impact on the other side of the Atlantic. “Regardless of the path London chooses on Brexit, the US-UK relationship will continue to be vital to meeting the most pressing global challenges of today and tomorrow,” Atlantic Council Executive Vice President Damon Wilson said. “Precisely because of these challenges – from Russian aggression, Chinese assertiveness, and a changing global economy abroad, to divisive politics and populism at home – this relationship must continue to play its anchor role in the wider transatlantic relationship.”

“Washington has rightly stayed out of the negotiations between Europe and the United Kingdom on how exactly both parties achieve a separation, or even whether,” Wilson argued. “But even as a post-Brexit future remains murky, US policymakers must engage with both sides of the Channel to make sure that Britain’s debate about its ties to the EU does as little damage as possible to the ‘special relationship’ and the greater transatlantic alliance.”

At the end of her remarks on January 15, May promised that her government will not simply “run down the clock” toward the Brexit deadline, leaving the UK without a deal. But she will not abandon the decision to pursue Brexit. The British people voted to leave the EU, she said, and she believes “it is my duty to deliver on their instruction and I intend to do so.”

Image: Prime Minister Theresa May sits down in Parliament after the vote on May's Brexit deal, in London, Britain, January 15, 2019 in this screengrab taken from video. (Reuters TV via REUTERS)