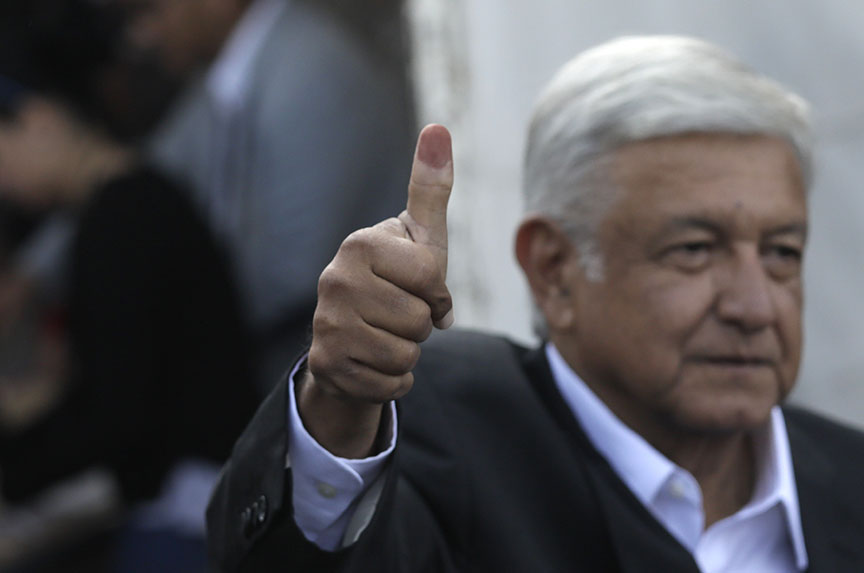 The election of Andrés Manuel López Obrador (AMLO) augurs great uncertainty over the direction of Mexico’s seminal 2013 energy reforms. As a candidate, AMLO spoke in favor of pausing new offerings for oil and gas investment acreage, building more refining capacity within Mexico, and developing the nation’s gas supplies. Changes in Mexico’s energy framework will likely be incremental, but there is much that industry, think tanks, and even the US government can do to address the concerns raised by the president-elect during the campaign.

The political context of AMLO’s position on energy reform is important. With the United States threatening to withdraw from the North American Free Trade Agreement (NAFTA), eliminate investor protections, curtail even legal migration, and insulting Mexicans, AMLO’s desire for greater energy self-sufficiency is partially rooted in concern over the reliability of US energy supplies. As a long-time ally of national labor unions and a supporter of a strong Petróleos Mexicanos (PEMEX), AMLO may seek to maximize national investment and employment in the sector, hedging Mexico’s political risk, even at the cost of economic efficiency.

The 2013 energy reforms are rooted in the constitution and supported by implementing laws passed by Mexico’s Congress. These reforms cannot be changed by the executive alone. The president-elect has already said he will respect existing contracts. The build-out of the national gas pipeline system and national grid are projects undertaken by national regulators. The estimated $200 billion in new foreign investment in Mexico, new production coming online in ninety awarded blocks among sixty-eight operators, the opening of more than 1,700 gas stations by thirty new private operators, and the development of an unbundled, competitive retail power market will continue unabated.

But much of the energy reform is permissive, in that it gives the government the right (but not the obligation) to offer private contracts for oil and gas investment. It also gives national authorities great discretion in setting local content levels and approving the way in which PEMEX partners with private operators. As the new administration evaluates its options, it may suspend offerings of new areas for oil and gas investment, and assess whether it can or should push PEMEX into projects like new refinery construction, deep-water exploration, and unconventional gas development – areas the designers of the energy reform were certain that PEMEX lacked the capital or expertise to pursue.

The tradeoffs an AMLO administration may face between investing national income in energy infrastructure and increasing social spending may temper its strategy. Last August, Mexico’s Energy Minister Pedro Joaquin Coldwell estimated that Mexico’s oil production will average about 1.9 thousand barrels per day (mbpd) in 2018. This is far below the +3 mbpd Mexico produced in the mid-2000s, a high the architects of the energy reforms hope will be achieved again. With declining production for now, one of the highest employee per barrel ratios in the hemisphere, and a full portfolio, the only way PEMEX can undertake refinery investment or unconventional exploration on its own is for the government to increase its capital. The government would have limited options to do so: fund the company out of the state’s limited budget, allow PEMEX to increase borrowing, or oblige it to sell off assets. With a robust social spending agenda, sending taxpayer money to PEMEX rather than using private capital may not be attractive upon close examination.

Experts and industry should offer the president-elect and his team support to help them carve out a path that best maximizes Mexico’s competitive position in the current energy market. In the upstream, Mexico should seek independent expertise to benchmark its framework against Brazil and the United States. For deep-water investment, companies will compare taxes, royalties, access to existing producing assets, local content, and legal certainty in Mexico to similar opportunities in Brazil’s deep-water and pre-salt areas, as well as those in the US Gulf of Mexico, and even Guyana.

For the downstream, Mexico might commission advice on the state of the refined product market, the cost of refinery construction, and the net return to Mexico for building its own refinery targeted at domestic consumption in an already liberalized market. So far in 2018, as much as 75 percent of the country’s gasoline consumption in some months was imported, mainly from the United States. Indeed, refinery output in Mexico, like upstream production, is in decline from upwards of 1,300 mbpd in 2004 to below 800 mbpd in 2017. PEMEX’s total refining output has reached a twenty-seven-year low and fresh investment is coming only slowly. AMLO’s concerns are understandable, and his proposed solutions merit a dispassionate analysis. In light of inexpensive, abundant gasoline coming over the border, one point to consider is if federal investments of $6 – $10 billion (by its own campaign’s estimates) in new refineries is what PEMEX needs in a hotly competitive downstream environment.

Companies may want to find creative ways to partner with PEMEX to benefit from its local knowledge, but recognize its limits on capital. An AMLO administration may want a PEMEX presence in more projects than the Enrique Peña Nieto administration, which prioritized making the sector more competitive by encouraging more purely private operators and consortia.

The US government, to the extent it values the Mexican market as the top destination for US natural gas and refined product, might signal its intention to conduct energy trade purely on the commercial market. Indeed, if NAFTA lapses, some of it benefits might be salvaged by a bilateral (or preferably trilateral) agreement to declare North America an energy free trade zone with zero tariffs and national treatment for the United States, Canada, and Mexico.

The new administration can also help bolster investor confidence. It can reaffirm the sanctity of existing contracts. It can open a dialogue with the investment community to show it is willing to listen and engage. It can even compensate for potentially lapsed investor protections under NAFTA by allowing third-country arbitration of investment disputes over a reasonably high threshold.

President-elect López Obrador and his team have spoken extensively about the need to review the existing energy reforms, which is a routine course of action when a new president inherits a reform package. In 2013, the energy reforms were driven by apolitical economic factors. These drivers have not changed over time.  Continued action is needed to revive Mexican oil and gas production, generate more reliable and lower carbon electricity, yield a more competitive PEMEX, and reduce corruption. This will help to bring about a more prosperous Mexico. These outcomes are in both the United States’ and Mexico’s national interests. The AMLO administration may be highly skeptical that the reforms will provide these benefits. For the next six months, all parties will be best served by listening carefully to the new administration’s concerns and helping create a shared understanding of market realities as the new leadership formulates its policies.

Image: Presidential candidate Andrés Manuel López Obrador showed his ink-stained thumb after voting at a polling station during the presidential election in Mexico City, Mexico, on July 1. Exit polls showed him winning the vote by a large margin. (Reuters/Alexandre Meneghini)