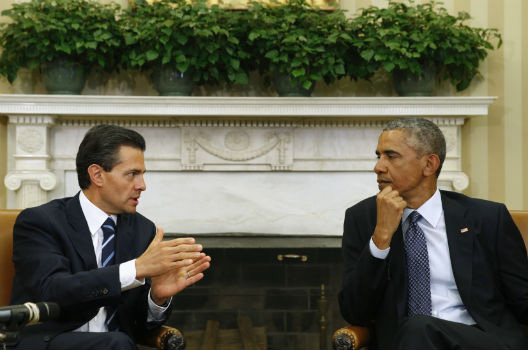 Peña Nieto, Hit By Scandal, Aims to Show Mexicans the Benefits of his Economic Reforms Before Mid-Year Election

Mexican President Enrique Peña Nieto visits the United States in the midst of the toughest moment of his presidency. He will hope to use his meeting with President Barack Obama today to advance his domestic agenda, according to the Atlantic Council’s top Latin America analysts.

The US has been “rightly impressed” by Peña Nieto’s reform agenda and Obama will “reiterate the admiration of the United States for these reforms,” said Peter Schechter, director of the Atlantic Council’s Adrienne Arsht Latin America Center.

Peña Nieto started off 2014 earning global praise for implementing reforms that are set to unleash the country’s energy potential and break up telecommunications monopolies, among other things. He ended the year on the defensive, facing a public uproar over the abduction and murder of 43 college students, allegedly by drug cartels acting at the behest of local officials, and over media reports that a contractor favored by the government had built and financed homes in which the president and his treasury secretary live.

“The question is not so much where does he stand now because of what happened in the fall, the question is how will he go on the offensive, how will he retake the initiative in 2015, especially in the first half of the year, to regain the footing that he had before?” said Jason Marczak, the Arsht center’s deputy director.

In his New Year’s message, Peña Nieto acknowledged “a difficult year.” He also noted a surge in organized crime in Mexico.

“A few months ago Peña Nieto would probably have preferred to only come and talk about economic issues and the new migration executive actions, but the situation in Mexico has changed over the last few months forcing his administration to focus on security once again,” said Marczak.

Q: US President Barack Obama met Mexico’s President Enrique Peña Nieto at the White House on January 6. What are your expectations of the meeting?

Marczak: Today’s visit is President Peña Nieto’s first state visit to the US as president and it comes after two years of incredible successes in Mexico for the president’s reform agenda, but after a few very rocky months for the president.

The conversation between the two presidents will focus on security and justice, economic relations, immigration, and, I would also assume, learning more about the new US Cuba policy, which is of interest to leaders throughout Latin America.

A few months ago Peña Nieto would probably have preferred to only come and talk about economic issues and the new migration executive actions, but the situation in Mexico has changed over the last few months forcing his administration to focus on security once again.

The US is an important partner for Mexico and that partnership can hopefully be extended through this state visit with new accords announced on security cooperation, specifically assisting Mexico in its judicial reform and furthering agency-to-agency collaboration in tracking down narco-traffickers and stemming the drug trade.

Peña Nieto will also congratulate the president on his very bold and historic decision to allow for upwards of 4 million unauthorized immigrants in the US to begin a process toward legal status. About half of those immigrants are of Mexican origin. The Mexican government, including its vast network of consulates across the US, will have an important role in helping migrants understand the president’s actions and helping them have the necessary paperwork to be able to apply for the new legal status.

Schechter: I think that the United States has been rightly impressed by the depth and speed of the reform process in Mexico. It has really hit pretty much everything from education, tax, health, and, the two best-known ones — telecommunications and energy reforms. There is no doubt that President Obama will reiterate the admiration of the United States for these reforms.

Besides whatever the political benefits a meeting may bring the leaders, these are two enormous countries. This is a border of nearly 450 million people, over a billion dollars cross the border every day, there are 40 million people of Mexican heritage in the United States. There are huge issues here that transcend politics, personality, moments that any Mexican president and any American president will have to deal with.

We’re talking about two major countries with major issues between them — huge opportunities and important problems. I think it is perfectly normal for two presidents that share such a large border with that many people to meet regularly and often as these two presidents do.

Q: Early in his presidency, Peña Nieto wanted to shift the Mexico-US relationship away from security. Does the renewed focus on security, particularly dealing with the drug cartels, change that focus and undermine his social and economic agenda?

Schechter: There is no doubt that President Peña Nieto’s desire to concentrate on the economic relationship as the principle and overwhelmingly important part of the bilateral relationship has been dealt a blow by the fact that the issues of administration of justice, human rights, and drug violence have once again reared their heads in Mexico.

The fact is that there are two Mexicos. One is highly globalized, anxious to engage with the world, young, urban, and the other one is backward, rife with impunity, seriously infected by narcotics money and mafia criminality.

President Peña Nieto’s has always believed that only a diversification of the Mexican economy — the acceleration of growth and the ability for competition to provide more and better jobs — was the single largest weapon against impunity and criminality. What has happened in the last couple of months in Mexico makes it so that he must now accelerate parallel policies that go beyond economic reforms, to deal with the important administration of justice issues.

Q: The new US Cuba policy has effectively removed a stumbling block in the US relationship with Latin America. Now that that is out of the way, what is the expectation in Washington from leaders like Peña Nieto on pushing democratic reforms in Cuba?

Schechter: One of the most effective things President Obama has done with his policy is to get the US ‘out of the way’ on the Cuba issue. We have been in the way on the Cuba issue for 55 years. It has been impossible to talk about Cuba without talking about the United States. Somebody from Buenos Aires couldn’t talk to somebody from Mexico City about Cuba without saying ‘Ah, yes, but the United States sanctions… .’

One of the important things the president has done is he has allowed a conversation about Cuba, about the good and the bad, to now happen without mentioning the United States. What it allows now is for Mexico and other large Latin American countries to formulate a Cuba policy that includes human rights, democratization, and civil society that is independent of the perpetual bilateral crisis mode between the United States and Cuba.

Q: What will Peña Nieto be hoping to achieve on this visit?

Marczak: Peña Nieto has had a rough few months. His visit to Washington is partly an opportunity to give a boost to his own agenda moving into 2015. What Peña Nieto is hoping to get out of this visit is public praise from Obama for what he has achieved in Mexico, and also to come back home with new deliverables on how the US will partner with Mexico in addressing short- and medium-term systemic challenges, whether that is working together on the migration issue or on the security issues.

One of the main complaints of the Mexicans has always been that potentially up to 90 percent of the guns that are used in Mexico come from the US and that the narco-money is funneled back into Mexico from the United States.

President Peña Nieto has a bold education plan to send Mexican students to the US, but there are huge challenges in terms of being able to get visas. That level of educational exchange is something that is increasingly important for Mexico, especially with the reforms and opening up the energy sector, for example. The US can fill an important void, but we have to put in place a more reliable visa process.

The US-Mexico relationship, similar to the US-Canada relationship, is unlike any other relationship we have. Most of what is achieved between the US and Mexico does not happen at the presidential level. Our ties with Mexico are so deep that much of what is accomplished happens through Cabinet secretaries, members of Congress, border-state governors, mayors, and beyond. The president coming to Washington to meet with Obama is very important, but what is even more important are the multiple avenues of engagement we have with Mexico and understanding how to leverage those different relationships.

Q: Has Peña Nieto been weakened by the recent controversies that have swirled around his administration?

Marczak: Peña Nieto’s popularity has taken a beating in the last few months, but every leader across the world has bad months. The question is not so much where does he stand now because of what happened in the fall, the question is how will he go on the offensive, how will he retake the initiative in 2015, especially in the first half of the year, to regain the footing that he had before?

Part of that revolves around new security and justice initiatives, but even more difficult than that is addressing the sentiment that has yet again risen in Mexico around the question of “Two Mexicos.” The issue of Iguala [the southern Mexico city where 43 students disappeared in September after they were attacked by the municipal police] or the mansions, those isolated incidents spark a larger question about equality in Mexico, a question that has historically plagued Mexican society and that is much harder to address than reforming the police to weed out corruption. So he will have to find new ways to retake the initiative to show that his government is striving to build a more equal country.

The underlying common thread among all the different reforms is they provide a needed economic boost and address fundamental structural issues in Mexico that have long prevented Mexico from jumping to the next level of socioeconomic development. In the short term, the problem that Peña Nieto faces is an economy that is growing far below expectations. With legislative elections in July, he has only a few months to show how the reforms are benefiting the Mexican people, and, beyond the reforms, what measures he is taking to inject new life into the economy.

Q: Is President Obama in a position to raise human rights and administration of justice issues with the Mexican president considering incidents of racially biased police violence in the US?

Schechter: I don’t think that President Obama is going to raise human rights issues as a matter of criticism, but I think that what he will do and what the Mexican government will appreciate, is to offer US assistance to deepen and accelerate the administration of justice reforms in Mexico. This could include technical cooperation on how to move from a written court system to an oral court system, assistance in anti-corruption training of police, and increasing intelligence capacity of the armed forces commands.