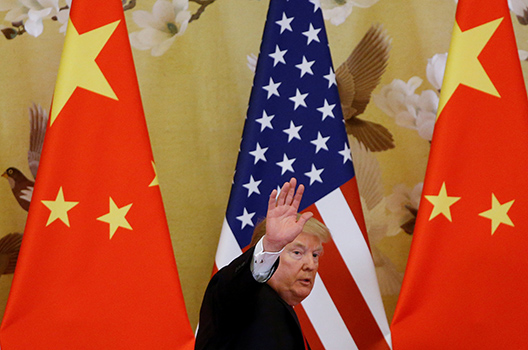 On September 18, hours after US President Donald J. Trump announced his decision to impose 10 percent tariffs on $200 billion worth of Chinese imports, China struck back. Beijing retaliated immediately, announcing tariffs on an additional $60 billion in US imports.

The new Chinese tariffs will target more than 5,000 US goods, including meat, nuts, alcoholic drinks, chemicals, clothes, machinery, furniture, and auto parts—nearly everything that China imports from the United States.

The Chinese tariffs, just like the new US ones, will go into effect on September 24.

Trump said in a statement on September 17 that the US tariffs on Chinese imports will rise from 10 percent to 25 percent on January 1. This new round of US tariffs follows the 25 percent tariffs on $50 billion of Chinese goods that the Trump administration imposed earlier this year.

Ahead of Beijing’s response, Trump had warned China against retaliatory action against US farmers. Such action, he said, will trigger “phase three”—tariffs on approximately $267 billion of additional Chinese imports. If this were to happen it would mean that almost all Chinese imports in the United States will have tariffs.

The latest round of tariffs follow similar earlier measures. In July, Trump imposed tariffs on $34 billion in Chinese imports; Beijing responded in kind. In August, Trump slapped tariffs on an additional $16 billion in goods; once again these were matched by China. We saw the same story play out this week.

So, should we expect yet another round of tit-for-tat tariffs?

“The bottom line is that we expect this to continue to escalate and, potentially, very quickly,” said Bart Oosterveld, director of the Atlantic Council’s Global Business and Economics Program.

On September 18, ahead of the Chinese announcement, Trump tweeted: “China has been taking advantage of the United States on trade for many years. They also know that I am the one that knows how to stop it.”

He reiterated his warning to China over retaliation. “There will be great and fast economic retaliation against China if our farmers, ranchers and/or industrial workers are targeted,” he tweeted.

Marie Kasperek, an associate director of the Global Business and Economics Program, said the Chinese countermeasures “will not have much impact on the US economy.”

Furthermore, she added, “China will run out of tariff countermeasures if the US retaliates.”

Several rounds of talks between the United States and China have failed to achieve any breakthroughs on the Chinese trade practices, which Trump says are hurting US businesses.

A Chinese Foreign Ministry spokesman, Geng Shuang, said Trump’s latest round of tariffs “has brought uncertainty” into the planned bilateral negotiations. “The Chinese side has repeatedly emphasized that the only correct way to solve the trade dispute between China and the United States is through talk and consultation on the basis of equity, integrity and mutual respect,” Geng said. But he did not say China was pulling out of the talks altogether.

Oosterveld predicted a “continued willingness” on the part of China to remain engaged in the negotiations. Any deal, however, would be unlikely before the US midterm elections in November, he said.

In his statement on September 17, Trump laid the blame for the current situation squarely on Beijing.

“We have been very clear about the type of changes that need to be made, and we have given China every opportunity to treat us more fairly.  But, so far, China has been unwilling to change its practices,” Trump said.

“As president, it is my duty to protect the interests of working men and women, farmers, ranchers, businesses, and our country itself.  My administration will not remain idle when those interests are under attack,” he added.

Kasperek said that while the latest round of tariffs announced by Trump notably excluded consumer goods, such as Apple products, “phase three would encompass about all Chinese imports.”

“The impact of this,” she said, “will, in the worst case, be felt by the US consumer, especially those looking for Black Friday and Cyber Monday deals.”

The pinch, however, will not be enough to convince Trump to reverse course, she predicted.