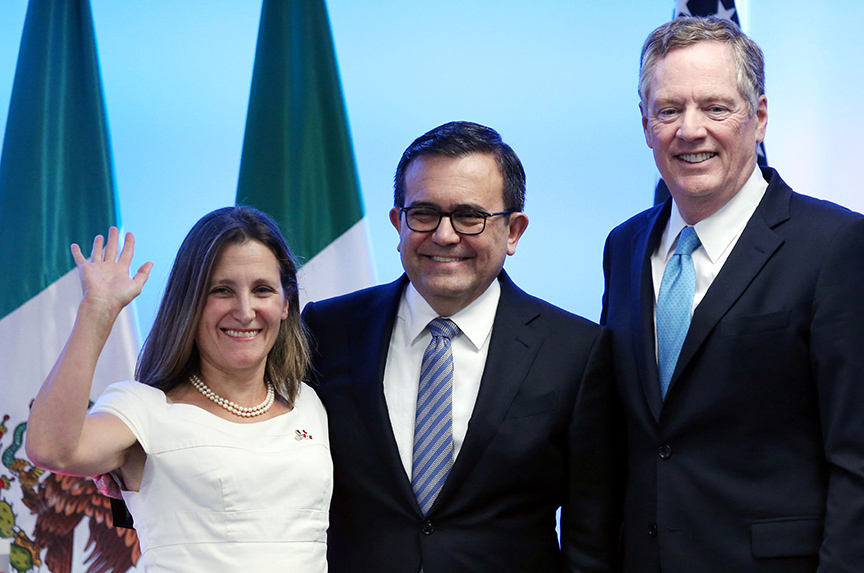 From left: Canadian Foreign Minister Chrystia Freeland, Mexican Economy Minister Ildefonso Guajardo, and US Trade Representative Robert Lighthizer posed for a photo after addressing the media at the end of the second round of North American Free Trade Agreement (NAFTA) talks in Mexico City, Mexico, on September 5. (Reuters/Edgard Garrido)

In the midst of North American Free Trade Agreement (NAFTA) renegotiations in August, US President Donald J. Trump tweeted saying that NAFTA is the “worst trade deal ever made,” and threatened to withdraw the United States from the agreement because Canada and Mexico are being “difficult”. While many have brushed these statements off ahead of the third round of discussions, set to begin on September 23, one cannot help but wonder: How close are we to a new and improved NAFTA?

The answer is complicated, especially as NAFTA is an increasingly divisive topic. According to a February poll, roughly half of the American public believes NAFTA has been bad for the United States. Of course, this figure is more nuanced with Democrats and younger Americans overwhelmingly supporting NAFTA. Mexicans are equally suspicious of NAFTA, with only fifty percent believing that the agreement has benefitted Mexico and many fearing a renegotiation would only bring advantages to the United States. This leaves Canada, where two-thirds of the public support NAFTA—a surprising number considering that less than half of Canadians supported the agreement when it was first signed in 1994.

An extremely tight timeline is putting additional pressure on negotiators to quickly come to a consensus on a wide range of controversial issues. Should negotiations take too long, the agreement is likely to become even more politically charged with Mexican presidential elections in July 2018 and midterm congressional elections in the United States a few months later. Bilateral trade agreements with the United States have on average taken a year and a half to negotiate, and while these negotiations aren’t starting from scratch, NAFTA is over twenty-three years old and all three countries have different objectives.

All parties agree that NAFTA is outdated and needs to be updated, but the trade partners disagree on what provisions should be modified. The US Trade Representative, Robert Lighthizer, has also been vocal about NAFTA’s flaws. Thankfully, rather than threatening a US withdrawal, he has set an ambitious renegotiation agenda covering everything from customs procedures, intellectual property protections, digital trade, rules of origin, energy provisions, and agricultural trade.

Canada and Mexico have also released negotiation objectives. Mexico has chosen to focus on strengthening North American competitiveness, increasing the inclusivity and the responsibility of the agreement, modernizing the agreement, and increasing investment and confidence in the region. To do this, Mexico proposes simplifying customs procedures, granting more seasonal entry permits, writing chapters on energy and digital trade, breaking down non-tariff barriers to trade, among other measures.  All of this this is in line with Mexico’s bottom line: maintaining a favorable trade relationship with the United States and restoring confidence in its own markets. The peso seems to take a hit every time Trump threatens to pull out of the agreement, having fallen nearly 1.5 percent after Trump’s August 27 tweet.

The settlement process, embodied in Chapter 19 of the trade agreement, will be a particularly difficult discussion. The chapter establishes one of three NAFTA dispute mechanisms, and is at the center of a lumber dispute between the United States and Canada. The issue was largely ignored in the original negotiations, but has become an increasingly hot topic, especially after the Trump administration imposed a 20 percent import duty on Canadian softwood lumber. The chapter provides for an independent court to review anti-dumping and countervailing duty disputes, outside of the country’s own legal system. The United States has vowed to remove the provision from NAFTA, something that has got Canadian lumber exporters worried. Although Canada was adamant the provision be included in the original negotiations, it may be willing to accept amendments to Chapter 19, if the United States is willing to address the underlying issues like “buy American” legislation.

Such provisions of Chapter 19 have proven to be one the most controversial parts of the deal, and are something the Trump administration would like to see removed from the agreement entirely. This, and the long list of complaints raised by each country, will make negotiations difficult and slow.

Additionally, the US corn industry could also increase internal pressures within the United States. Arguably one of the largest benefactors of NAFTA, it appears that the United States’ corn industry’s greatest threat is Trump’s rhetoric. Mexico is the largest importer of US corn, and in the wake of the US presidential elections, Mexico has begun to look for new corn exporters, including Brazil and Argentina. In terms of dollar value, American corn shipments represent less than 1 percent of the total trade between the two countries, but it has assumed a deeper symbolic meaning. Not only is corn seen as a symbol of the interconnectedness of the two nations, the grain belt overwhelmingly voted for Trump. Should negotiations go poorly, the corn industry could revoke its support.

All of this means that renegotiations are a lot more complicated than they seem, and simplifying it into winners and losers is not as easy as the US president would like to think. Let’s not forget that Mexican local producers were actually put out of business by subsidized US corn when NAFTA was first signed.

Another point that is being overlooked by the oversimplified rhetoric of US politics is the actual legality of a US withdrawal. According to Article 2205 of NAFTA, the United States must provide six months’ written notice before leaving the agreement. But, the US Constitution could throw a wrench in any withdrawal. Under the Commerce Clause of the Constitution, power to approve, and to terminate US participation in trade agreements is assigned to Congress. If Trump does choose to pull the United States out of the trade agreement without congressional approval, US exporters and consumers—and perhaps also members of Congress—could sue the administration, and the case could go all the way to the US Supreme Court.

With both the Mexican and American publics divided over NAFTA, a failure to stick to the negotiation schedule makes a successful modernization of the deal less likely. Mexico has strategically refused to engage with Trump on foreign policy issues over Twitter, which will hopefully help to de-escalate some of the rhetoric and facilitate fruitful discussions. But with all nations viewing NAFTA under a slightly different light, the negotiators face a tough road ahead. They must bear in mind that free trade is not a zero-sum game—it never has been.