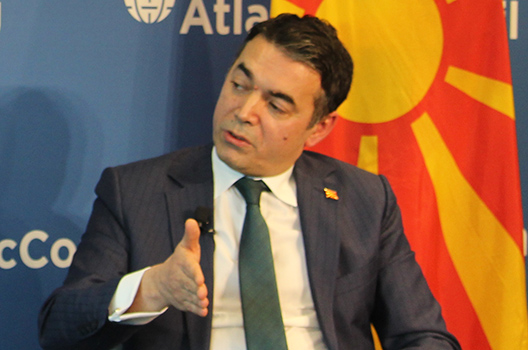 Macedonia’s entry into NATO can help revitalize the Alliance, the country’s foreign minister, Nikola Dimitrov, said at the Atlantic Council in Washington on February 5.

“NATO is a family that is about security, stability, predictability, and a better and more peaceful world,” Dimitrov said, adding that “for you on the inside it is probably easy to forget how cold it is on the outside.”

Under a name deal reached between Macedonia and Greece, Macedonia will be known as the Republic of North Macedonia. The deal, which ends a twenty-seven-year dispute between the neighbors, could lead to Macedonia signing an accession pact with NATO on February 6.

The Republic of North Macedonia will become official terminology once Greece ratifies Macedonian accession to NATO, which could occur as early as February 8.

The name deal is “a second chance for my generation,” said Dimitrov, adding, for decades Macedonia has been “locked in a waiting room.”

Damon Wilson, the Atlantic Council’s executive vice president, said that “one of the most important signs of the dynamism and health of our alliance is that nations on its periphery still believe it is strategically valuable to be part of NATO.”

The fact that the goal of NATO membership drove Macedonia and Greece toward agreement proves, Wilson said, that NATO can continue its historic role of “making former adversaries allies.”

While opposition parties in both countries remain skeptical of the agreement and convinced that “they could do a better deal,” there is no real alternative to solve the dispute and guarantee Macedonia NATO membership, Dimitrov argued. Concessions and compromises had to be made to achieve lasting peace and stability, he said. “You cannot win a dispute if the dispute is with your neighbor. You cannot win if you defeat your neighbor.”

Dimitrov believes the agreement will be durable, in part because Macedonia will be entrenched within NATO and because of the considerable international praise the agreement has gained. He sympathized with those who felt strongly about not sacrificing “who we are,” but he felt the agreement showed that the two different Macedonian identities in North Macedonia and Greece “are not necessarily contradictory, but can co-exist.” He was confident that “three, five, or ten years from now, people won’t be able to understand why there was a dispute in the first place.”

Although NATO membership appears imminent, EU accession will admittedly be harder to obtain, Dimitrov said. “We have missed a few European trains,” he explained, “and while we were in the waiting room, the region and the EU changed, including how they do accession.” In addition to justifiably strict conditions on things like rule of law and governance, Dimitrov lamented that the “appetite is gone” for accession as “we are no longer in the day of the uniting [of] Europe.”

He warned that the EU and candidate countries must avoid the “double bluff,” where candidates say they are making changes without taking real steps forward, while EU member states vaguely support accession without actual commitments.

The prime goal for Macedonia, Dimitrov said, was to change the country for the better, of which EU membership is just one step, but an important one. “The best tools [for] change are those offered by the accession process,” he said. He expressed his hope that EU member states would offer to start the accession process this year, as that decision is “not about joining,” but rather just “starting the journey.”

Dimitrov argued that extending the accession process to Macedonia could kickstart a “competition” between his country, Serbia, and Montenegro, adding incentive for these countries to quickly make rule of law and governance reforms. “It is time for our region to step it up,” Dimitrov said, adding that it is of prime importance for the Balkans to create societies that allow the “young generation [to stay] at home.”

Dimitrov argued that the Prespa Agreement can add new momentum to the transformation of the entire region by leading the way on how former rivals can become deep allies. “More than half of the Prespa Agreement talks about close cooperation in security, [the] economy, energy, environment, [and] health,” Dimitrov explained. He hoped that the new North Macedonia and Greece could eventually become as close as Germany and France.

“Once you dare to exit the trenches that are comfortable, but bring no progress, you change the way you see the problem [and your] neighbor,” Dimitrov said. “I think we realized we were going to be natural allies.”

Image: H.E. Nikola Dimitrov, Minister of Foreign Affairs of the Republic of Macedonia, speaks at the Atlantic Council on February 5, 2019.