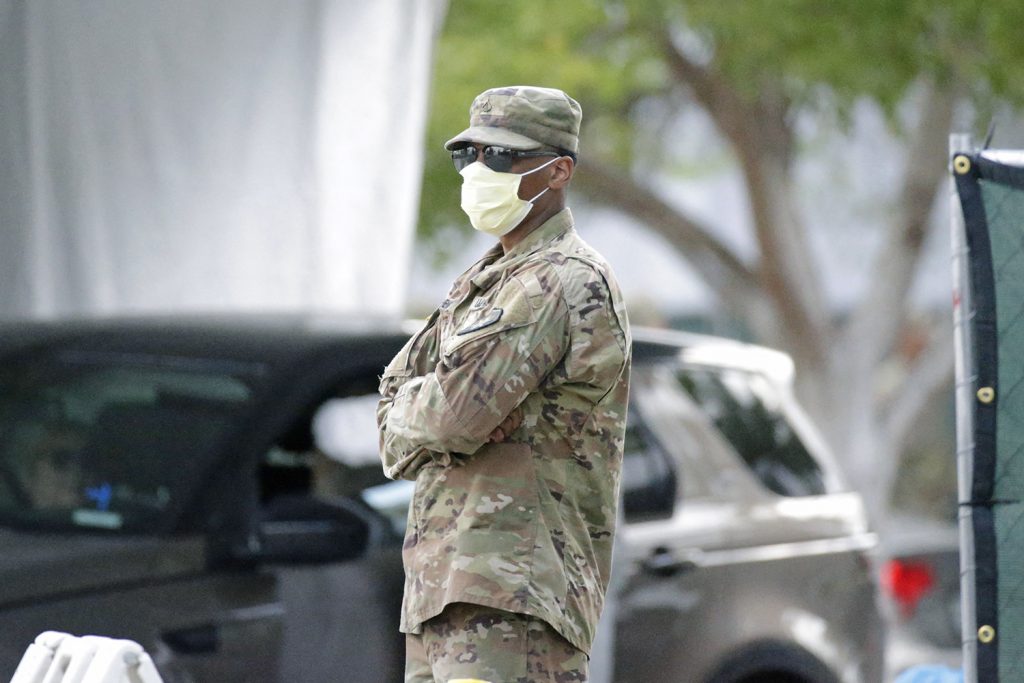 The US National Guard is stepping up their COVID-19 response with food banks, testing sites, nursing homes, and personal protective equipment distribution across the United States. “What makes us particularly effective in relation to the COVID-19 response is the unique, very deep connections with our communities and our homelands,” the Chief of the National Guard Bureau General Joseph L. Lengyel said on May 28. “We know the people, the emergency response mechanisms, and the geography within which we operate. It has made us a very effective partner.”

Lengyel spoke with the Atlantic Council as part of the Commanders Series, a speakers’ forum for senior military and defense leaders. Lengyel took the opportunity to praise the work of the National Guard’s platoons and squadrons who have assembled one of the military reserve force’s largest responses since Hurricane Katrina. “We are ‘the Swiss army knife’ of the public’s defense. We could be used many ways, as intended,” said Lengyel. “This is a superb example of…the utility of what the National Guard has become.”

The National Guard began their response on March 6, delivering coronavirus test kits to a cruise ship off the California coast. In the following months, the National Guard has implemented response measures in each of the fifty-four states and territories of the United States and the District of Columbia. Lengyel cited examples from Maine, where the National Guard provided testing for nursing home staff; to New York City, where platoons helped overwhelmed coroners conduct search and rescues for fatalities; and to Texas, where one member with past experience leading a call center helped set one up efficiently.

“Anything that the governors and states need us to do, we have leaders at every level…it is invaluable, leveraging the civilian skillsets of our members to fight this virus,” said Lengyel.

“The surprise for me was the criticality of the ability of the National Guard members to run food banks,” added Lengyel. With many food banks staffed or used by elderly and vulnerable Americans, many have been left unsupported out of concern for the safety of their communities from the spread of the virus. In Arizona, members also bridged the food supply chain by transporting food cross-state when the state lacked truckers. “So, we paid it forward a little bit and let volunteers get out of the way, let the National Guard members who could come in and take over that responsibility. We packed millions of pounds of food and distributed thousands of boxes of food at many food banks across the nation,” said Lengyel.

Although now equipped with a robust response to the pandemic, Lengyel notes that the process to ignite the response across the United States has required learning along the way. Initially, US leaders treated the issue as individual state responsibility, impacting the force’s ability to prepare. While the National Guard normally responds regionally and relies on the provision of supplies from other, non-impacted regions, every part of the country has been impacted by the pandemic. In accepting that COVID-19 mitigation is a national and international issue, the National Guard adopted a unified response domestically and internationally. “We combined, from all fifty states, lessons learned and best practices and shared those with all of our partner nations all around the world,” says Lengyel.

Looking ahead to the hurricane season, Lengyel is confident that the National Guard can keep up the COVID-19 response even with the arrival of natural disasters. Of the nearly 450,000 members of the National Guard, 45,000 are contributing to the coronavirus response across the nation—but Lengyel remarks that the force is not reaching disaster fatigue. “The men and women who are serving are motivated. They like what they’re doing. They feel like they’re making a difference for their communities here,” said Lengyel. However, it isn’t business as usual for hurricane and storm response, as the National Guard has had to adjust preparations in the pandemic era, devising plans to construct and supply shelters or evacuate nursing care facilities while keeping the spread of COVID-19 in mind.

Nevertheless, Lengyel is confident of a smooth response with any storm category three or lower. “We have plenty of force structure right now to deal with even an aggressive hurricane season… We’ll be ready if it comes,” said Lengyel.

Prompted about the Space Force National Guard, Lengyel argued that creating the Space National Guard would only show how innovative and efficient the force currently is, having already helped conduct surveillance, intelligence, tracking, reconnaissance, and more in space. “For twenty-five years, we’ve been doing space—so it’s not a new mission for us, it is not anything new,” says Lengyel. But having the Space National Guard would also highlight each member’s dual-use nature as the force can be used to achieve other objectives. For example, a current space squadron held a food bank in California in the COVID-19 response. “We can move out and be part of it. It’s a no brainer,” adds Lengyel.

“The morale is high; people feel like they’re contributing… This is distinctly National Guard business,” said Lengyel. “This is what makes us different.”

We can strengthen the global food system: Here is how

Image: A Florida Army National Guard looks on as people get tested for COVID-19 at a drive-thru testing center at Marlins Park as the coronavirus pandemic continues on Wednesday, March 25, 2020 in Miami. (David Santiago/Miami Herald/TNS/ABACAPRESS.COM) via Reuters