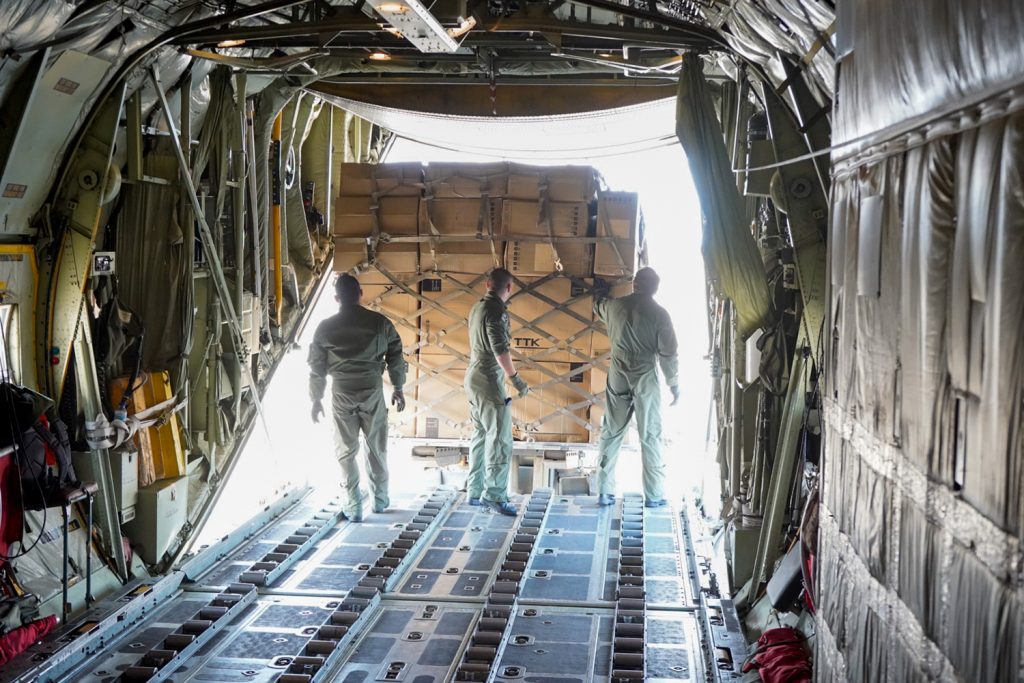 MADRID, SPAIN- In the photos, members of the Spanish Air Force unload aid supplies from the Czech Republic, in Madrid, Spain on March 29, 2020. A C-130 cargo plane from the Spanish Air Force that transports 10,000 protective medical suits donated by the Czech Republic land at Torrejon Air Base, Spain as part of allied efforts to combat the effects of the coronavirus pandemic. (via REUTERS)

Speaking at a virtual town hall moderated by Atlantic Council Executive Vice President Damon Wilson, Geoană reported that the April 15 NATO defense ministers virtual meeting focused on “what [we] can do more to help each other in this very difficult moment.” Noting that there were “lots of signs of solidarity” during the meeting, Geoană said NATO defense ministers agreed that “anybody having something in excess—because not all countries are affected the same—[should] use [NATO’s] coordination mechanism and make sure that the ones who have the most need and the places with the most urgent need receive [support.]”

Geoană conceded that the first reaction of many governments to the pandemic was naturally “to take care in the best possible way of their own citizenry,” but argued that “after the first shock, we started to realize that this is something you cannot fight alone…we need each other.” This sense of solidarity has already produced tangible results, as NATO has completed more than 100 missions of strategic airlift to deliver medical supplies, built more than twenty-five new hospitals, and facilitated a delivery of Turkish supplies to the United Kingdom in the first-ever use of a rapid mobility air procedure, according to Geoană. The deputy secretary general also praised the efforts of allies who have been less strained by the pandemic, such as the Czech Republic and Slovakia, who “have been some of the most active in going out and reaching out to allies.”

“We have not been perfect,” he argued, “but I think after the initial instinct of [focusing] on our own [countries], we see now from the United States all the way to North Macedonia…a renewed sense of solidarity and I think we will be coming out stronger from this crisis.”

The pandemic has also demonstrated NATO’s continued value in facilitating the cooperation between allies that is so vital during crises, Geoană said. “Our DNA is crisis management, our DNA is command and control, our DNA is efficiency and logistics and putting together in critical moments the pieces that can make a nation and an alliance in distress work,” he explained. Allies have found NATO’s Euro-Atlantic Disaster Response Coordination Centre (EADRCC) particularly helpful in facilitating aid shipments and joint projects, he reported. The Alliance’s ability to pivot to dealing with this unexpected crisis is a fundamental feature of the organization, Geoană argued. “NATO is equipped in the way we function, the way we take decisions, the agility and the vigilance that is in built into our [organization] to adjust.”

But all the attention on the medical and economic challenges of the crisis does not mean NATO is taking its eyes off its primary mission. “We do not want for anyone to believe that for one second that because of this pandemic that the Alliance is less vigilant and less able to protect and defend our citizens,” Geoană maintained. The deputy secretary general reported that all NATO operations, preparations, and deterrence measures continue to function, albeit at reduced staff numbers to protect their health. “NATO is here and we are doing our job and keeping our people safe,” he said. This continued readiness is important, he added, because “the threats and concerns to our common security have not gone away because of the pandemic, in a way they have been amplified.” He noted that NATO officials have observed “Russia doing some snap exercises under the pretext of the pandemic” and threats from non-state actors to try to take advantage of distracted political leaders to hit against NATO interests. NATO’s primary mission right now, he said, is “preventing…a global health crisis from becoming a security crisis.”  At such an important time, he explained, “we just cannot lower our vigilance because there is a moment of great difficulty.”

This extends to the continued problem of disinformation campaigns targeting NATO societies, a problem made worse by the frenzied information environment of a pandemic. “The pretext of the pandemic is being used and abused by state and nonstate actors in a massive infodemic,” he said, as they are promoting “disinformation [and] conspiracy theories, [and] putting seeds of discontent and mistrust” online. Geoană said that NATO officials continue to work with the EU and other national governments to push back on these false narratives, arguing that leaders “have to mythbusters ourselves” as “this is something we can only fight with the truth.”

Geoană also warned that NATO’s authoritarian rivals could use the economic damage dealt by the pandemic as an opportunity to “try to abuse our relative weakness and purchase strategic industries and infrastructure.” He said NATO would be paying specific attention to protecting vital infrastructure and industries which could be sold off to competitors as an easy way to raise funds in what could be a difficult road to recovery for many allies. Geoană also cautioned against suggestions that the economic crisis should trigger cuts to defense spending as “our security is as much needed and investment in our security is as much needed as before—perhaps even more.” The additional tasks assigned to national militaries during this time, including facilitating delivery of medical equipment and building medical infrastructure, itself necessitates more resources rather than potentially costly cuts, he argued.

NATO leaders are also already planning for a world after COVID-19, according to Geoană. Alliance officials had previously created resilience standards for member states for crises—such as continuity of business for governments, protection of infrastructure, and access to vital resources—which have now experienced the ultimate stress test. The deputy secretary general said NATO defense ministers were already beginning to “update” these standards and have begun to “integrate the lessons” of the crisis into future plans.

“Our main business is to keep 1 billion people safe,” from security threats but also in every way NATO can from other emergencies like the coronavirus pandemic, Geoană stressed. As allies continue to reach out with assistance and coordination through this crisis, he said, it is no wonder why “solidarity is a key word in our alliance.”

NATO in the fight against coronavirus: Coordinating, contributing, controlling, and communicating

NATO’s proven capabilities to respond to the call of its Allies and support them in times of greatest need ensures that the Alliance will be able to emerge from this crisis strong and ready to take on the next challenge.

Even as the Alliance continues to focus on its core defense and deterrence efforts—and rightly so—it should not dismiss capabilities like the EADRCC as bureaucratic side projects. Instead, with an eye to the future, transatlantic policymakers should rethink how to empower and reinforce these types of capabilities to meet different types of threats.