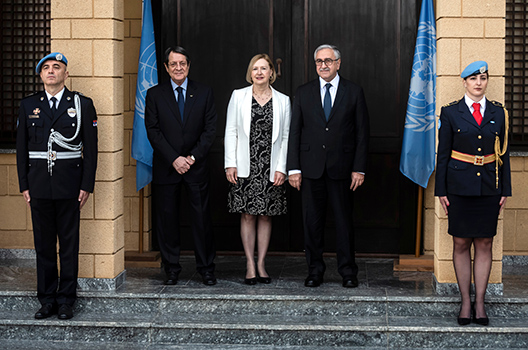 Fifteen years ago, NATO welcomed seven new members into the Alliance, expanding its borders eastward from the Baltic to Black Seas. As NATO reaches its seventieth birthday, it could now be time to look toward adding a new member: this time in the Eastern Mediterranean.

After the end of World War Two, policy makers in London and across the Atlantic worried the Cyprus problem could unravel the entire Eastern Mediterranean. Following independence from the United Kingdom in 1960, tensions on the Mediterranean island flared between the Greek and Turkish communities residing there, inflaming tensions between new NATO allies, Turkey and Greece. There was considerable concern in the West that a deterioration of the situation could leave the door open for the Soviets to gain a foothold in the Mediterranean basin.

In 1974, the Colonels’ Junta in Greece orchestrated the ouster of Greek Cypriot leader Patriarch Makarios III, prompting fears in Ankara that Athens was planning enosis, the union of Cyprus with Greece. In response, Turkish forces intervened immediately in 1974, landing more than 30,000 troops on the island before a ceasefire was declared three days later.

With the end of the Cold War, the Eastern Mediterranean’s strategic value decreased, although lingering regional tensions remained. Over the last decade, however, the geopolitical situation in the region has changed materially, as Moscow has bolstered its position through its alliance with the brutal Syrian regime of Bashar al-Assad, rotating over 65,000 troops to the country and expanding its presence at Tartus, its only naval base on the Mediterranean. Moscow has now extended its access to Tartus by forty-nine years, gained access to other Syrian ports, and has indefinitely retained its presence at Hmeimim Air Base.

Furthermore, the waters around Cyprus have become a zone of concern regarding nonstate threats, including proliferation, organized crime, terrorism, human trafficking, and refugee flows. The divided island offers vulnerabilities that nefarious actors can exploit, as limited Cypriot security cooperation has led to unnecessary challenges. In 2014, Cypriot authorities scrambled to respond as an oil tanker hijacked by Libyan rebels headed toward the island. In a dramatic interdiction, US forces acted, supporting Cypriot authorities stretched beyond their means and limited by ad hoc measures.

As long as the Cyprus issue remains unresolved, there is an opportunity cost not only to what Cypriots can achieve on their island, but also to broader security and prosperity in the Eastern Mediterranean. The unfinished business of Cyprus is also the unfinished business of a Europe whole, free, and at peace. Rather than being at worst a potential vulnerability or at best a handicapped partner in the transatlantic community, however, Cyprus could offer an opportunity for another strategic win for the free world.

Despite goodwill, a settlement to the Cyprus problem has been elusive, as demonstrated by the breakdown of talks in 2017. A primary roadblock continues to be security guarantees in a future reunification scenario, specifically the issue of a Turkish troop presence in the north of the island. Despite the fact that the three security guarantors of Cyprus designated in the 1960 Treaty of Guarantee – Greece, Turkey, and the United Kingdom – belong to the same Alliance, NATO has not been put forth as a solution to the security problem. Now may be the time to do so.

With NATO membership built into any settlement, Greek and Turkish Cypriot communities, along with Athens and Ankara, and in partnership with all of their European partners and NATO allies, might have more confidence in striking a deal. Cyprus remains the only European Union member who is not even a member of the Alliance’s Partnership for Peace program, due entirely to the outstanding reunification problem. Immediate NATO membership for a reunified island, however, would automatically embed, and therefore replace, a joint Greek-Turkish-British security guarantee within an Alliance commitment to the entire island without any need for alternative mechanisms.

As part of the agreement, NATO could establish an operations center on the island, drawing on existing infrastructure and housing personnel from NATO allies, including Turkey. This new operations center would provide NATO allies a common situational awareness within the Eastern Mediterranean of unchecked migration flows, illicit shipping, or potential proliferation. It would also support NATO planners rightly focused on the Alliance’s eastern flank and both Russian and non-state threats. Furthermore, conflict spillover from Libya to Syria exposes many southern NATO members to significant risk, and a forward operations center in Cyprus could provide valuable capabilities in these areas. In 2013, the United Nations and Organization for the Prohibition of Chemical Weapons (OPCW) based their operation to extract chemical weapons from Syria on Cyprus.

NATO membership and ensuring Turkey’s limited presence on the island within an agreed NATO framework would give the Turkish Cypriot community confidence in their own security, while at the same time assuaging Greek Cypriot and Greek concerns by placing such a presence firmly within NATO activities. This approach would replace the former system of outside security guarantors by embedding a unified Cyprus within an alliance based on mutual defense. In turn, NATO forces from across the Alliance rotating to Cyprus would also provide the confidence-building presence required to ensure the settlement’s success.

NATO membership for Cyprus – at the start of the unification process – could help both sides commit to forge one state together. Indeed, Greek Cypriot President Nicos Anastasiades has already signaled potential support for NATO membership.

After little diplomatic movement, Anastasiades and Turkish Cypriot leader Mustafa Akinci may soon be close to agreeing to restart formal talks after previous efforts stalled in the summer of 2017. Despite the lingering bad sentiments from that failure, these two leaders have a rapport that is the product of having known each other since their childhoods. They also have the standing at home and internationally to negotiate a deal and to rally their constituencies behind it.

The possibility of Cyprus in NATO helping to clinch a deal is now possible, somewhat ironically, by the significant pain endured by Cyprus during the 2012-2013 financial crisis. Following the near collapse of the island’s banking system in 2013, the International Monetary Fund, European Central Bank, and European Commission issued a 10 billion Euro bailout to Cyprus, which included an important “haircut” provision: depositors in Cypriot banks would need to help fund the rescue measures by handing over uninsured savings above 100,000 Euros.

While the “haircut” was certainly a bitter pill for many to swallow, in hindsight it lifted significant political weight off Cypriot shoulders. Many of those most directly impacted by the seizure of funds were Russians who were using Cyprus as a tax haven. There has long been concern that Moscow is ready to play spoiler in any late-stage peace talks, as Russia would attempt to preserve a key wedge between NATO allies. The accelerating flight of Russian capital and business ties in Cyprus, however, may give the Greek Cypriot side the room to maneuver on security guarantees through NATO membership.

In the past, any NATO role has been pushed aside given the expectation that Greek Cypriots communists (in the form of the political party AKEL), a major force in Greek Cypriot politics, would block such a proposal. While AKEL members sometimes still parrot Moscow’s talking points, the Cold War links between a communist Soviet Union and AKEL seem irrelevant in today’s new geopolitical circumstances. Furthermore, given negotiations are under the auspices of the United Nations and Russia’s permanent veto at the Security Council, negotiators have avoided a topic like NATO membership which could engender opposition from Moscow. Yet any deal among the parties would neither be framed as anti-Russian nor explicitly require Moscow’s approval.

The recent success of the Prespa Agreement – ending the twenty-seven-year name dispute between now-North Macedonia and Greece – can also have a knock-on effect for Cyprus. Greek Prime Minister Alexis Tsipras would be a key player – alongside Turkish President Recep Tayyip Erdoğan – in supporting a deal. Tsipras’ recent success with his northern neighbor could signal Athens’ willingness to resolve another contentious historical dispute.

Tsipras and Erdoğan themselves met on February 5 and 6, during which time the Cyprus question was discussed. As Turkey navigates a complicated relationship with the European Union, Greece is becoming the most outspoken voice for ensuring strong ties to Ankara which help keep Turkey anchored in the strategic West. Resolving the Cyprus problem in a way that draws Greece and Turkey closer together would only bolster the prospects for regional security and prosperity.

NATO membership could transform Cyprus into an anchor of stability in an eastern Mediterranean region embroiled in crises. Political divisions notwithstanding, Cyprus is already an attractive member of the transatlantic community. After all, the island enjoys strong democratic political traditions and institutions and an open market. Its position off the shore of the Levant projects European democracy and rule of law deep into the Eastern Mediterranean. Anastasiades and Akinci, as well as the Greek and Turkish Cypriot communities, view themselves as part of the West. In many respects, Cyprus is a European outpost with strong ties to a strategic and complicated region of the Middle East and North Africa.

Under Anastasiades, the Republic of Cyprus has pursued a strategic partnership with the United States, identifying a common positive agenda in the bilateral relationship and building on areas of practical cooperation. Indeed, the US government is now weighing whether to support Congressional relief to enable the United States military to cooperate with the republic’s armed forces. Lifting so-called International Traffic in Arms Regulations (ITAR) limits on the Republic of Cyprus would enable the United States, for example, to bolster the republic’s ability to monitor its own waters to deter weapons trafficking or to conduct search and rescue missions.

Furthermore, a unified island would be well positioned to develop a single national security strategy focused not on mistrust of either side, but on a common set of challenges the island faces. By developing and publicly communicating such a strategy agreed between the Greek and Turkish Cypriot communities prior to any settlement, a unified national security strategy could serve as a confidence building measure at home and a sign of Cyprus’ ability to provide security first within the Partnership for Peace and as a prospective NATO ally.

Building on Republic of Cyprus’ own strategy of developing close ties with most of the littoral states in the Eastern Mediterranean, an established multinational NATO operations center focused on non-state threats should also engage other non-NATO partners, such as Lebanon, Israel, Egypt, and Jordan, laying the groundwork for a new regional security framework in the region.

Finally, NATO membership for a unified Cyprus would facilitate the investments required in the waters surrounding the island to unlock energy as a source for economic development for Greek Cypriots and Turkish Cypriots alike.

For too many years, Cyprus had been seen as a problem to be fixed or a potential risk to manage. Yet Cyprus has increasingly demonstrated that it can be a constructive actor in the region. NATO membership for a unified island would not only unlock opportunities for the island’s citizens, but also ensure that Cyprus would quickly become a valued player within the Western security community, helping the family of democracies secure our societies and build prosperity throughout the Eastern Mediterranean.