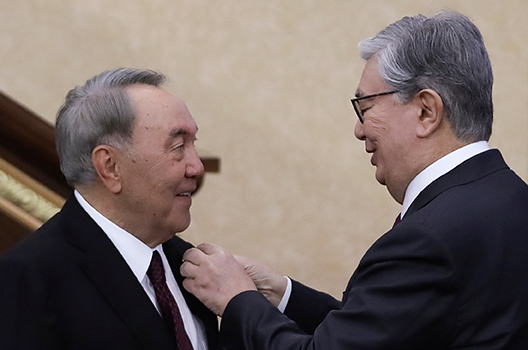 On March 19, Kazakhstan’s president, Nursultan Nazarbayev, made a brief statement on television declaring that he would resign the next day. Why prompted his decision and what will be its consequences?

Nazarbayev has discussed his possible resignation aloud for the last couple of years, so it appeared to have been well-prepared. He is seventy-eight, has ruled Kazakhstan since 1989, and is considered to be in frail health, so his decision to resign makes perfect sense. He sets a good example for the region, where leaders have been ousted or other former colleagues in Uzbekistan, Turkmenistan, and Azerbaijan have died in office. His voluntary and well-planned resignation shows that Nazarbayev remained in full control and by no means was forced out.

Although Nazarbayev resigned, he will maintain control as chairman of the powerful Security Council, head of the ruling Nur Otan party, and as a member of the Constitutional Council. This suggests that Nazarbayev intends to continue being the ultimate arbiter like former Chinese leader Deng Xiaoping, guaranteeing stability and security.

Rather than calling for immediate elections, Nazarbayev appointed the sixty-five-year-old chairman of the Senate, Kassym-Jomart Tokayev, as his successor until Nazarbayev’s current term runs out in April 2020. According to the constitution, the chairman of the Senate would be the rightful successor. Moreover, Tokayev may be Kazakhstan’s foremost professional diplomat. He has served as foreign minister twice and he was prime minister in between. Tokayev might have been the most professional successor that Nazarbayev had at hand.

For years, it has been speculated that Nazarbayev would appoint one of his two eldest daughters, Dariga or Dinara, or Dinara’s husband, Timur Kulibayev, as his successor, but instead of appointing one of his kin, Nazarbayev has set a good example by choosing an outstanding professional.  Furthermore, Dinara and Kulibayev are both billionaires and stand out as the poster children of Kazakhstan’s kleptocracy. Yet, on March 20, Dariga Nazarbayeva, who is a senator, was elected the head of the Senate, which means that she took Tokayev’s place and now is next in line for the presidency.

That Nazarbayev appointed his foremost diplomat his successor also suggests that he considered foreign policy the greatest challenge. Wisely, Nazarbayev called Russian President Vladimir Putin not long before his resignation speech. Astana announced that Nazarbayev had assured Putin that although he leaves his post, he will continue to maintain regular contacts with Putin. Putin’s spokesman, Dmitri Peskov, confirmed that the conversation had taken place, but he revealed nothing about its content.

Kazakhstan has reasons to be concerned about Russia after Nazarbayev’s resignation. Russians mainly reacted with surprise, although Nazarbayev and his senior officials have discussed his coming resignation extensively in public. Clearly, they did not see this as a welcome development. The most sensitive question might be Nazarbayev’s resignation, which occurs while Moscow is discussing the “2024 problem,” that is, when Putin’s term ends. Has Nazarbayev set an undesired example for Putin?

Kazakhstan’s good relationship with Russia has been one of Nazarbayev’s greatest achievements and it is not easy to maintain given the many complex bilateral issues. Nazarbayev has also effectively managed the relationship with the many ethnic Russians in Kazakhstan. Moscow may be worried about the smooth and cosmopolitan Tokayev, who is fluent in both English and Chinese, while Nazarbayev only speaks Russian and Kazakh. Yet, it is most unlikely that Tokayev would undertake any dangerous experiment in foreign policy. For Kazakhstan, a good relationship with Moscow is a sine qua non.

While Nazarbayev has been an outstanding diplomat, he has run out of steam in economic policy. A month ago, he sacked the government and demanded sweeping changes to improve the standard of living. At times, Nazarbayev has pursued quite radical market reforms, while they have regularly been impeded by corruption scandals, often involving his family. Tokayev might be able to relaunch Kazakhstan’s long-halted market reforms. One of the few market indicators available is Kazakhstan’s Eurobond due in October 2014, whose low yield barely moved.

The very calm with which Nazarbayev’s resignation was received appears a reassuring verdict on his rule. No post-Soviet country lived as peacefully or saw its gross domestic product rise as sharply as Kazakhstan under Nazarbayev’s thirty-year rule. Now he gives Kazakhstan’s well-educated young elite an opportunity to take the country further.

Anders Åslund is a senior fellow with the Atlantic Council’s Eurasia Center and author of the forthcoming book “Russia’s Crony Capitalism: The Path from Market Economy to Kleptocracy.”

This article also appeared in Russian Forbes in Russian.