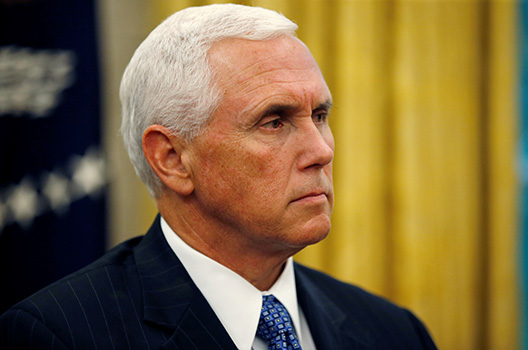 US Vice President Mike Pence took direct aim at Beijing in an October 4 speech in which he accused China of “pursuing a comprehensive and coordinated campaign to undermine support for the president, our agenda, and our nation’s most cherished ideals.”

Pence’s speech followed similar remarks by US President Donald J. Trump at the United Nations Security Council on September 26. Trump there accused Beijing of “meddling… because I am the first president ever to challenge China on trade and we are winning on trade.” China and the United States have been locked in a tit-for-tat exchange of tariffs after Trump placed restrictions on $50 billion worth of Chinese goods in June. On September 17, the United States placed additional tariffs on $200 billion worth of Chinese goods, in response to Beijing’s retaliatory tariffs for the initial June measures.

“There can be no doubt,” Pence said, “China is meddling in America’s democracy.” The vice president argued that China’s targeting of tariffs on Trump’s political supporters, its harassment of American business, and its exertion of influence in media and academia was evidence of “a whole-of-government approach using political, economic, and military tools, as well as propaganda, to advance its influence and benefit its interest in the United States.”

“The American people deserve to know,” Pence said, that “in response to the strong stand that President Trump has taken Beijing is pursuing a comprehensive and coordinate campaign to undermine support for the president, our agenda, and our nations most cherished ideals.”

According to Pence, there is clear evidence of Beijing’s campaign of influence “gleaned from intelligence assessments and some of which are publicly available, but all of which are fact.”

The clearest example provided was the targeting of Beijing’s tariffs. “When it comes to influencing the midterms, you need only look at Beijing’s tariffs in response to ours,” Pence said. “The tariffs imposed by China to date specifically targeted industries and states that would play an important role in the 2018 elections. By one estimate, more than 80 percent of US counties targeted by China voted for President Trump and I in 2016. Now China wants to turn these voters against our administration.”

Pence added that “our intelligence community says that China is targeting US state and local governments and to exploit any divisions between federal and local levels on policy. It is using wedge issues like trade tariffs to advance Beijing’s political influence.”

Pence alluded to an advertisement placed by the Chinese government in the Des Moines Register as further evidence of Beijing’s attempt to “influence American public opinion the 2018 elections, and the environment leading into the 2020 presidential elections.” Pence added that “Beijing has mobilized covert actors, front groups, and propaganda outlets to shift American’s perception of Chinese policy.”

Pence also accused “senior Chinese officials” of trying “to influence business leaders to encourage them to condemn our trade actions leveraging their desire to maintain their operations in China.” Specifically, he reported that “China threatened to deny a business license for a major US corporation if they refused to speak out against our administration’s policies.”

Pence said that he was told by a “senior career member” of the intelligence community that “what the Russians are doing pales in comparison to what China is doing across this country.”

Pence listed a litany of American economic grievances against Beijing, arguing that the “Chinese Communist Party has also used an arsenal of policies inconsistent with free and fair trade, including tariffs, quotas, currency manipulation, forced technology transfer, intellectual property theft, and industrial subsidies doled out like candy, to name a few. These policies have built Beijing’s manufacturing base, at the expense of its competitors—especially America.”

Pence accused Chinese leadership of directing “its bureaucrats and businesses to obtain American intellectual property—the foundation of our economic leadership—by any means necessary.”

“Worst of all,” Pence continued, “Chinese security agencies have masterminded the wholesale theft of American technology, including cutting-edge military blueprints.”

Pence maintained that the United States doesn’t “want China’s markets to suffer. In fact, we want them to thrive. But the United States wants Beijing to pursue trade policies that are free, fair, and reciprocal.” Pence warned that if Chinese officials do not reverse course, “we’ll levy even more tariffs, with the possibility of substantially more than doubling that number, unless a fair and reciprocal deal is made.”

While Pence acknowledged that Trump had “forged a strong personal relationship” with Chinese President Xi Jinping and “they’ve worked closely on issues of common interest, most importantly the denuclearization of the Korean Peninsula,” the vice president had strong words for China’s military activities in the South China Sea.

Referring to a close encounter between a Chinese naval vessel and the USS Decatur in the South China Sea this week, Pence promised that “despite such reckless harassment, the United States Navy will continue to fly, sail and operate wherever international law allows and our national interests demand. We will not be intimidated; we will not stand down.”

On the issue of Taiwan, Pence criticized Beijing for pushing “three Latin American nations to sever ties with Taipei.” Pence maintained that “our administration will continue to respect our One China Policy,” but warned that “America will always believe [that] Taiwan’s embrace of democracy shows a better path for all the Chinese people.”

Pence also took the opportunity to launch attacks against Beijing’s internal surveillance and control of the Chinese people. He deplored Beijing’s “aim to implement an Orwellian system premised on controlling virtually every facet of human life—the so-called ‘social credit score.’”

He specifically pointed to the plight of China’s persecuted religious minorities—Christians, Buddhists, and Muslims. His remarks on the Muslim Uyghurs represent some of the toughest language ever from an American official as Pence recounted that Uyghur prisoners in China “described their experiences as a deliberate attempt by Beijing to strangle Uyghur culture and stamp out the Muslim faith.”

“As history attests, a country that oppresses its own people rarely stops there. Beijing also aims to extend its reach across the wider world,” Pence argued. He took aim at China’s use of “debt diplomacy” which offers “hundreds of billions of dollars in infrastructure loans to governments from Asia to Africa to Europe to even Latin America. Yet the terms of those loans are opaque at best, and the benefits flow overwhelmingly to Beijing.”

In response, Pence said, the United States will “advance our vision of a free and open Indo-Pacific, we’re building new and stronger bonds with nations that share our values, across the region—from India to Samoa. Our relationships will flow from a spirit of respect, built on partnership, not domination.”

The United States is streamlining “international development and finance programs… [G]iving foreign nations a just and transparent alternative to China’s debt-trap diplomacy,” Pence said, promising that “America’s commitment to the Indo-Pacific has never been stronger.”

Robert A. Manning, resident senior fellow with the Atlantic Council’s Scowcroft Center for Strategy and Security:

“Pence’s speech echoed President Trump’s comments last week at the United Nations. To be fair, Pence’s assessment of flawed US past assumptions about China, their troubling patterns of economic and political-military behavior were accurate, and he did frame his remarks on the hope that the United States and China can find a new mutual accommodation.

“Moreover, there is no question that China seeks influence in the United States via things like funding Chinese studies and its Confucius Institutes.

“But to repeat the same nonsense—that retaliatory tariffs and taking out paid ad supplements in US newspapers are interfering in US elections—is just plain silly. First, recall Trump said not to worry, because China would not retaliate. China, like the EU and others imposing tariffs, seeks to target them to be politically painful. That is very different from Russian trolls pretending to be Americans and flooding social media with things aimed to influence voters, or Russian hackers directly hacking into the electoral rolls of various states. That is serious, outrageous interference.

“Whether by design or effect, one has to wonder if the campaign against China is an effort to deflect attention from Russia and the investigations about their activities.

“To be sure, China’s predatory mercantilism, aimed at dominating high-tech; its assertive maritime actions in the East and South China Seas; and its imperious Belt and Road activities, turning countries like Pakistan and Sri Lanka into debtors and building a ring of ports around the world for its new maritime fleets, are all cause for concern.

“China poses a major challenge to the US economic, political, and strategic posture, but gratuitously demonizing them with half-truths and distortions only complicates efforts to find a new balance of interests and a redefined relationship with Beijing.”

Jamie Metzl, Nonresident Senior Fellow for Technology and National Security with the Atlantic Council’s Scowcroft Center for Strategy and Security

“President Trump and Vice President Pence are absolutely correct that many of China’s actions threaten the United States and the world, that past US administrations have failed to adequately respond to this challenge, and that America must do more to defend our interests and those of our allies and partners around the world facing Chinese coercion.

“But rather than develop an integrated whole of government strategy to respond to this threat, the Trump administration has massively undermined US interests and inadvertently served the interests of China. By weakening America’s alliances, undermining free trade, despoiling American democracy at home and its best values abroad, the Trump administration is weakening America just when the world needs America to champion our values and the rules-based international order we have created and defended for the past seven decades.”

“China’s counter-tariffs, having matched dollar for dollar the US tariffs, now affect almost all US exports to China. Should the United States follow through on its threats to increase existing tariffs and levy additional ones, Beijing is limited to increasing existing tariffs and non-tariff measures such as unfavorable regulatory treatment of US companies in China.

“Chinese trade practices have long been a concern for the United States and its traditional allies. Whether unilateral tariffs will result in meaningful change to these practices remains to be seen. Minor adjustments, such as those achieved in the new Korean trade deal (KORUS) and NAFTA deals, will probably be sufficient for the administration to claim a win.”

“It seems like Phase III of tariffs on all remaining goods from China is imminent. It is no longer unclear what the Trump administration’s trade strategy is. It has become clear that the administration views tariffs as the solution to everything. This is in line with President Trump’s statement at the press conference announcing the US-Mexico-Canada Agreement (USMCA) in which he said that ‘without tariffs, we wouldn’t be standing here.’ It is shocking how openly the administration is abusing security provisions for economic purposes.

“At the same time, one could say that the United States is currently pursuing a dual-track strategy on this: tariffs paired with a multilateral approach. While all of this is going on, the United States, the EU, and Japan have been meeting several times in the past few months to draft a joint proposal on increasing transparency on reporting subsidies at the World Trade Organization. This is clearly aimed at China. They aim to have a draft by early November, which coincides with the midterms.”