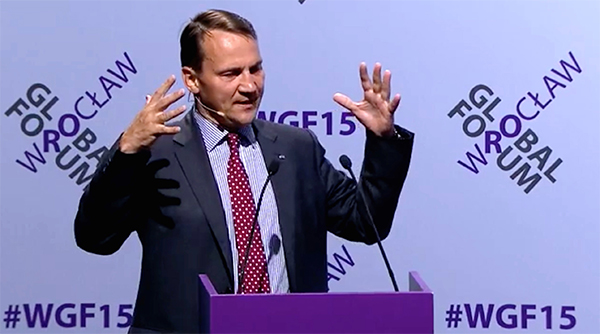 Two days after resigning as the Speaker of Poland’s Parliament following an eavesdropping scandal, veteran Polish politician Radosław Sikorski said his country and the United States must jointly stand up to Russian President Vladimir Putin’s provocations in Ukraine.

Speaking June 12 at the Atlantic Council’s Wrocław Global Forum 2015, Sikorski thanked the US government for boosting its military presence in Eastern Europe in a time of great uncertainty following Russia’s 2014 annexation of Crimea and its current military aggression in eastern Ukraine.

“We have felt some frustration that so many years after Poland’s accession to NATO, we didn’t see visible signs of a US presence here,” Sikorski conceded in a keynote speech following his introduction by the Atlantic Council President and CEO Fred Kempe.

“But in the last few years, contingency plans have been written for Poland, which have now started being backed up with capabilities,” he said. “We’ve seen convoys from the Baltic states, permanent rotational exercises in Poland, a small permanent air detachment in Poland, and we’ll soon be building a missile defense base. Now it’s happening and I feel satisfied.”

The same day as Sikorski’s speech, US news media reported that the Pentagon is poised to store battle tanks, infantry fighting vehicles and other heavy weapons for 3,000 to 5,000 US troops at allied bases in all three Baltic countries as well as in Poland, Romania, Bulgaria, and possibly Hungary.

The proposal—expected to win approval by US Defense Secretary Ashton Carter and the White House before the next NATO defense ministers’ meeting in Brussels later this month—marks the first time since the Cold War’s end that US heavy military equipment would be stockpiled in the formerly communist countries of Eastern Europe.

As Deputy Minister of National Defense, Sikorski—praised by Kempe as “a true visionary for the transatlantic partnership”—spearheaded Poland’s campaign to join NATO. Later, as Poland’s Foreign Minister from 2007 to 2014, Sikorski supervised the EU’s Eastern Partnership initiative along with former Swedish Prime Minister Carl Bildt.

Sikorski recalled that in 1992, when he joined the foreign ministry as a 29-year-old diplomat, “we were dreaming of NATO membership, but we still had Soviet troops on our territory.”

“Contrary to what the Russians will say now, we were not egged on to do it by the United States,” he said, noting that even though Poland had not yet been admitted to the military alliance, “things seemed to be going our way.”

“We were aspiring to join western institutions, and we had a national obsession to do so,” he said. “There was a public mood that we would eat grass, but we would join NATO.”

But then came the September 11, 2001, terrorist attacks, Sikorski said. “As far as we were concerned, on 9/11 the American supertanker turned another way, from completing the job of democratizing the post-Soviet world to fighting the war on terrorism.”

Sikorski said things have changed dramatically since those heady days when “the US was the top dog, which some people thought would last for decades, and the Internet seemed like a force for good, bringing the planet together.”

Now, he noted sadly, “the Internet is a source of vicious propaganda used by terrorists, criminals and millions of people venting their anonymous ill feelings,” while Europe faces more serious threats to its democracies than it has in Sikorski’s lifetime.

“In our neighborhood, Russia challenges the security guarantees she freely gave to Ukraine in the Budapest declaration in 1994, to respect the sovereignty and territorial integrity of Ukraine in return for Ukraine giving up the fourth largest nuclear arsenal in the world,” he said. “In the early 2000s, it looked like Europe would get a constitution and become—in the words of Tony Blair—not a superstate, but a superpower.”

Sikorski, a prominent figure in the West, studied at Oxford University and is married to Washington Post columnist Anne Applebaum. The 52-year-old politician tendered his resignation last week along with three other Polish cabinet ministers after microphones hidden in an expensive Warsaw restaurant one year ago revealed an expletive-laden conversation in which Sikorski, among other things, called Poland’s ties with the United States “worthless” and said British Prime Minister David Cameron was “incompetent.”

Nevertheless, former Florida Governor and Republican presidential candidate Jeb Bush met with Sikorski in Warsaw following his resignation and said he was still as strong US ally who had only expressed frustration with the Obama administration.

In his speech in Wrocław, however, Sikorski expressed only confidence that bilateral ties would improve over time.

“After all, our economies are growing. We have found new sources of cheap energy. Russia is in much deeper trouble than we are. We need to restate our goals, but for that, we need leadership, and leadership is not something you can do from behind,” he said.

“Whatever happens in the economy, one thing I am sure of,” Sikorski continued. “To face the challenges that surround us, we need to stick together. I can assure you that whoever is in charge in Poland after the autumn Parliamentary elections, Poland will remain a linchpin of NATO, an example to others of treating defense seriously and spending 2 percent of GDP on it—and I hope it means that Poland and the US will become even firmer practical allies in the future.”

Asked about the stockpiling of US weapons in Eastern Europe, Sikorski said it’s “a move in the right direction,” but not enough given continued Russian aggression in Ukraine.

“We need to regain President Putin’s respect,” he said. “We have to convince him that this time, it’s for real. NATO’s borders will really be defended.”