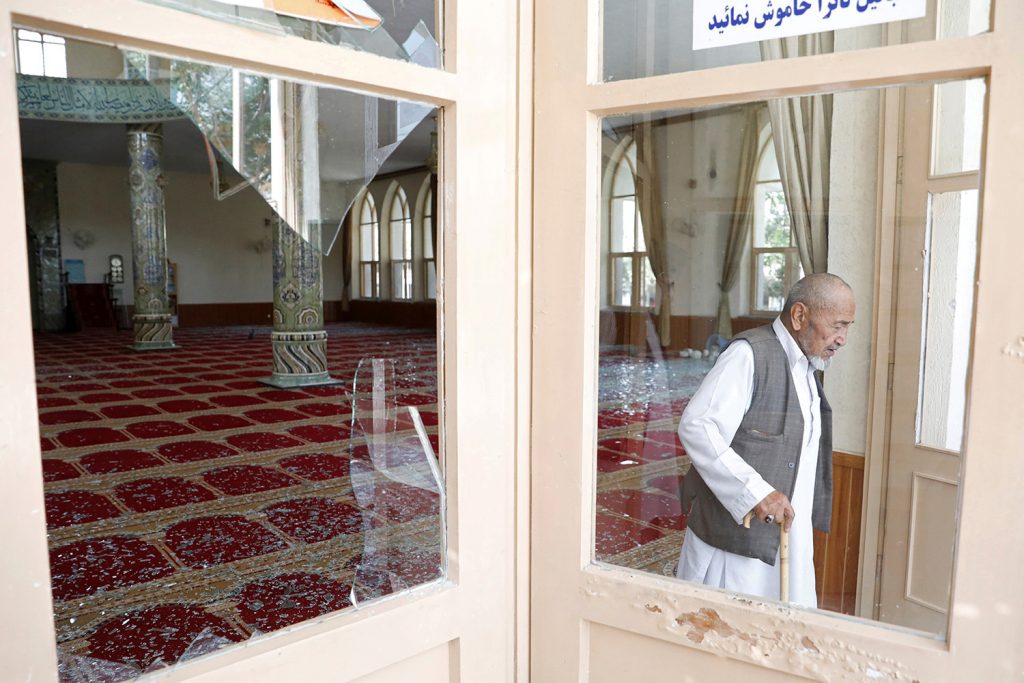 A man walks at a damaged mosque after a blast in Kabul, Afghanistan September 9, 2020. REUTERS/Mohammad Ismail

Despite increasing levels of violence and slow progress, marred by some setbacks in the ongoing negotiations, Afghanistan has come closer to reaching a peace settlement than at any time since the war began. While a political settlement may end the conflict, sustaining peace will depend on a common definition of what peace will look like and delivering on the promise of a better future for the Afghan people.

Planning for what comes next is to some extent already underway. Afghanistan’s major donors recently pledged $3.3 billion for 2021 to the Afghanistan Partnership Framework (APF), which outlines commitments from 2021 to 2024. These commitments signal to future government leaders in Afghanistan the key values upon which international support is contingent, in an attempt to incentivize protection of human rights and pursuit of economic development reforms, no matter the outcome of the negotiation process.

However, to ensure a smooth transition from war to peace and to avoid a reversion to conflict, the Afghan government and its international partners should start a parallel and continuous discussion around preparing for the day after peace and they should agree on a single strategy for building post-peace stability.

The primary challenges that should be the focus of these discussions are:

Why is it important to start preparing for peace now?

At least three main reasons suggest why leaders need to start thinking about the day after peace now. First, having a strategy coupled with an agreed-upon mechanism and well-resourced plan will be critical to addressing the immediate and urgent needs of post-peace settlement. Without such a plan and measures taken early on, opportunities will be missed and the risk of reversion to conflict will be high.

Second, a strategy that clearly defines broad parameters and mechanisms for post-peace implementation will help avoid the disasters of the past, when initiatives and programs such as Disarmament, Demobilization, and Reintegration (DDR), Disbandment of Illegal Armed Groups (DIAG), Afghanistan Peace and Reintegration Program (APRP), and so forth were put in place in a rush to achieve quick results, but which in the end delivered very little.

And third, preparing for peace takes time. Starting now will not only protect the peace agreement, but also will make delivery more efficient and effective.

The first step in the process for the government and its international partners is to agree on some key principles that will reflect the lessons of the past interventions in Afghanistan and of international experience overall, and should guide the work of preparing for peace. These are some basic guiding principles to start off with, which are now widely documented lessons learned in Afghanistan:

Have a government-owned and led process, to build sustainable delivery capacity and legitimacy:

The international community needs to be well coordinated, and leverage funding effectively:

Key components of the strategy

#1. Laying the past to rest

Afghanistan’s history is full of recurrent cycles of violence. Central to the rise of multiple phases of conflicts, among other things, is the fact that Afghans have never properly laid the past to rest. As the new chapter opens with the signing of peace agreement and, in fact, with the beginning of the new century (Solar Hijri calendar year 1400), creating spaces for and engaging in peace dialogues around a common definition for peace and laying the past to rest will put the country on an irreversible path for lasting peace. Peace dialogues should be conducted with an acknowledgement of people’s losses, including recognizing victims and a broad mechanism for reconciliation and justice.

With the possibility of a peace agreement comes the chance of a peace agreement falling apart. Thousands of Taliban fighters, their families, and at least a million more refugees who will be returning in the aftermath of a successful peace agreement will need jobs, shelter, and services. Reintegrating them will be crucial to make sure that Taliban fighters don’t resort to violence to maintain their lives. With a staggering poverty rate of over 70 percent, the adverse impacts of COVID-19, and declining international support, the government and its international partners should strategize and plan on how to address the immediate development needs of post-peace settlement. Scott Guggenheim and I offer a broader framework in our paper for post-peace development that focuses on improving government machinery through prioritization and sequencing, empowering reformers, and improving donor conditionalities. Improving government effectiveness and its coordination with international partners can help move from strategy to implementation. It can also create an enabling environment for addressing both the immediate post-peace development needs and maintaining medium to long term growth, setting Afghanistan on a path to self-reliance.

Aside from addressing the immediate development priorities, including the socio-economic reintegration of Taliban fighters, a complementary security component must also be integrated.

Shifting armed groups and combatants on all sides away from violence to peaceful economic activities is critical for making a peace durable and preventing return of violence. However, there are abundant lessons from international experience, as well as from Afghanistan’s own experience since 2001, about how DDR can go wrong: the numbers of beneficiaries and costs can quickly multiply, and social tensions can intensify if, for example, there are perceptions that ex-combatants are getting disproportionate benefits compared to non-combatants or victims. Another common pattern in experience is that the two “Ds” go reasonably well but the “R”—crucial for the longer-term sustainability of peace—is relatively neglected or poorly implemented. Reconciliation at local and community levels may be an important success factor for effective reintegration. The Citizen’s Charter program could play a role in this regard, building on its capacity to support whole-of-community reintegration of Afghan refugees and migrants. However, it will require significantly improved management and specialized partnerships to do so.

By way of a specific recommendation, the government and international partners should form a high level working group to coordinate government and donor cooperation on preparing for peace.

A core objective of a peace agreement is to provide the grounds for post-peace building stability. To support the implementation of peace agreement and avoid pitfalls and reversion to violence, preparing for the day after peace should proceed simultaneously with peace negotiations. Imagining peace in Afghanistan and thinking about anything post-peace might face a lot of skepticism in the face of all the uncertainties and disappointments around the peace process. However, good advance preparation and perseverance will ensure that the peace is as protracted or (hopefully more) as the war itself in Afghanistan.

Khyber Farahi is a development practitioner, former senior adviser to the president of Afghanistan on migration and social development, and an expert adviser on the Atlantic Council’s Strategic Dialogues on Afghanistan.

How ‘artivism’ can change society—in Afghanistan and beyond

Art can be used as an outlet for self-expression, but also as a tool to advocate for human rights. Through art, we can share the untold stories of the civil society, win back the hearts and minds of our fellow citizens, and send a clear message that activism in South Asia is vigorous and flourishing, and—in a region that continues to face many challenges—demonstrate that change is possible.