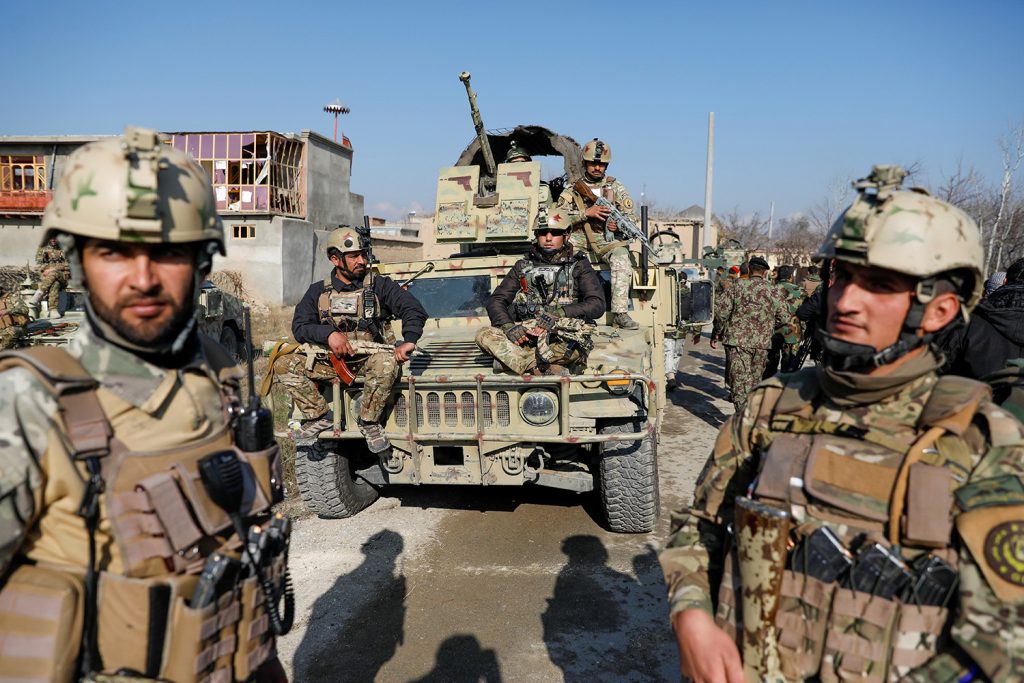 The Afghan National Defense and Security Forces (ANDSF) will be one of the most crucial components of a stable and successful Afghanistan during and after the peace process.  An empowered and effective force will safeguard the Afghan state and the gains of the last two decades, prevent terror safe havens from re-emerging, and ensure that the Taliban complies to the terms of a peace agreement. Despite its strategic importance, the future of the ANDSF as the backbone of the Afghan state has been largely ignored during the Afghan peace talks. Unless its value is recognized, the ANDSF could meet the same fate as the previous Afghan army under former President Mohammed Najibullah, which disintegrated after the president’s downfall due to deep ethnic and factional divisions, the absence of good leadership, and declining financial and technical support from the Soviet Union.

The sacrifices, valor, and key role of the ANDSF—as a professional and apolitical force—is often underappreciated both within and outside of Afghanistan. Discussion about the future of this force is often limited to a certain number of military and diplomatic circles in Washington, Kabul, and NATO headquarters in Brussels. But despite the lack of attention, the ANDSF remains on the frontlines of the fight against global and regional terrorist networks, which still aim to use Afghan soil as a launching pad to harm the United States and its western allies. Though many of Afghanistan’s partners have been disappointed by the murky dealings of Afghanistan’s domestic politics, the Afghan military is full of stories of sacrifice, bravery, and comradery in the face of a complicated and emboldened enemy.

With the start of the Afghan peace process and an imminent withdrawal of US and NATO forces from the country, the Afghan forces face a litany of unsettled questions, including potential restructuring and reorganization, their role in ensuring a new political settlement with the Taliban, long-term fiscal sustainability, and preservation of morale and motivation. The answer to these questions will primarily depend on both the joint Taliban and Afghan Government vision for the future of Afghan forces under a new political settlement, and the shape, size, and form of its future funding by the United States and NATO allies.

The Afghan Taliban have consistently labeled the ANDSF as an auxiliary force to the US occupation, and argue that it requires at the very least an overhaul (if not outright dismantling and disintegration) based on Islamic Sharia Law and their interpretation of Afghan values. To this day, however, the Afghan Taliban have neither publicly nor privately presented a vision for what kind of military and security forces they envision for Afghanistan, offering only vague statements on the need for the Afghan military to be Islamized and occasional calls for outright dismantlement. Conversely, the Afghan government and its western allies have consistently referred to the Afghan forces as an Islamic, Afghan, and nationalist force who are defending Afghan dignity, sovereignty, and territorial integrity, and are the first line of defense against international and regional terrorist networks.

The history of Afghanistan’s security sector demonstrates that there will be a successor to the ANDSF no matter what political settlement emerges from the peace process. But the eventual outcome of talks will determine whether this force is focused on protecting the state against its internal and external enemies, or is charged with resisting a renewed Taliban regime.

Since the reign of Afghan Emir Sher Ali Khan (1868), Afghans have had some form of a military force—mostly dependent on foreign subsidies and technology—primarily tasked with defending the throne but also ensuring the territorial integrity and sovereignty of Afghanistan. Even if the United States and NATO leave the country, it is likely that an independent military force would remain, albeit underfunded and deeply divided by factional and ethnic lines.

Many senior Afghan military officers and former mujahidin commanders have seen in their lifetime the rise and fall of at least three armies: the Afghan Royal Army, almost self-sufficient but supported financially and technologically by Britain, Germany, Russia, and Turkey; the Afghan communist army, supported by the former Soviet Union; and the army of the Taliban and mujahidin, which survived on the remnants of its predecessors with some technical support from the Pakistani military. As such, one can view the sudden withdrawal of US and NATO forces as part of an ever-evolving Afghan security sector where foreign supporters regularly move in and out of influence.

Afghan officers have drawn parallels between their US and Soviet advisers, including their modus operandi at the tactical, operational, and strategic levels, and how a “good and necessary war” eventually turned into a “bad and forever war.” Afghan officers have learned to be resilient in the face of constantly changing sponsors and regimes. As the looming US withdrawal has invoked a sense of abandonment and betrayal by yet another partner among the current Afghan security forces, many remember that their Soviet partners used to blame Gorbachev and the Politburo for changes in policy, just as their contemporary US allies blame an unconventional and nationalist president in the White House.

What might the Afghan peace process mean for the ANDSF?

The Afghan peace talks are a double-edged sword for the ANDSF. The process may accelerate the disintegration and eventual dismantlement of the ANDSF when combined with ineffective leadership, low morale, a deep sense of abandonment, and high levels of casualties, attrition, and defection. But the talks may also help to shape the ANDSF into a resilient national resistance force safeguarding the state and the multidimensional gains of the last two decades. The latter possibility is contingent upon continued financial and technical-military support from the United States and NATO.

There is a saying among Afghan army and security forces that the Taliban and their foreign terrorist allies (i.e. Al Qaeda, The Islamic Movement of Uzbekistan, Ansarullah of Tajikistan, and others) hate the ANDSF more than the United States, because it is the Afghan forces that know the Taliban deeply. The Afghan military and security forces can play one of two roles: (1) the enablers and guardians of any peace deal or (2) the spoilers of peace talks if they see these talks as an existential threat to their values and sacrifices. The outcome would pave the way for the ANDSF’s eventual solidification as either a united military protecting the peace deal or an ethnically-fragmented national resistance force against the Taliban led by a new generation of young army officers and cadets.

Regional actors also have a stake in the future form of the Afghan military. Countries such as Pakistan, India, Iran, and China will likely be interested in partnering with the Afghan military in some fashion to prevent a power vacuum once the United States leaves. Should the ANDSF remain a united force following a US withdrawal, these actors could partially fill the funding gap through bilateral security assistance in order to prevent any spillover of instability into neighboring countries. Alternatively, if the ANDSF collapses, these countries could resort to supporting their own proxy militias built on the remnants of US and NATO military equipment, similar to the last communist Afghan army in the 1990s.

The future of the ANDSF is directly interlinked with four major factors: the future of US-NATO financial and technical-military support; the evolution of political leadership in Kabul; qualified and unifying military leadership; and securing a political settlement and the eventual reintegration of Taliban fighters and commanders into the ANDSF. If one or several of these factors are missing, then it is likely that ANDSF will struggle to fight various Taliban offshoots and will face the same historical fate as its predecessors—disintegration and eventual dismantlement. With the current violence, slowly progressing peace talks, and ongoing development and investment projects carried out in parallel, ANDSF could see one of the following scenarios after the pre and post- process environment:

The best option for the Americans and NATO is Option B: to drawdown troop levels but continue financial and technical military support in areas such as supporting and training Afghans in military intelligence and irregular warfare, providing scholarships so that Afghan officers may attend NATO military schools, training Afghans on logistical supply management (i.e. maintenance of infrastructure) and financial and procurement management, as well as building an effective Afghan Air Force until the Taliban and their sponsors submit to a comprehensive ceasefire and eventual political settlement.

As one Afghan senior military officer said to me, “we are already fighting on our own, but we need our bullets and bread. If the Americans could furnish those to us, we will win and [the] Taliban will give up and make peace. This time we will have the time and the Taliban will have the clock.”

How ‘artivism’ can change society—in Afghanistan and beyond

By Kabir Mokamel and Omaid Sharifi

Art can be used as an outlet for self-expression, but also as a tool to advocate for human rights. Through art, we can share the untold stories of the civil society, win back the hearts and minds of our fellow citizens, and send a clear message that activism in South Asia is vigorous and flourishing, and—in a region that continues to face many challenges—demonstrate that change is possible.

Image: Afghan security forces are seen near the site of an attack in a U.S. military air base in Bagram, north of Kabul, Afghanistan December 11, 2019. REUTERS/Mohammad Ismail