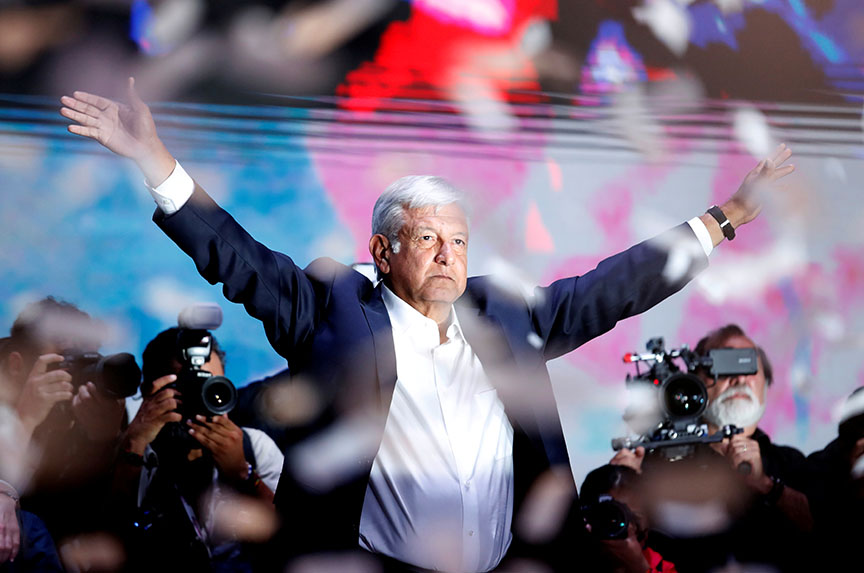 For Andrés Manuel López Obrador it was third time lucky.

The new president-elect, popularly known as AMLO, won Mexico’s July 1 presidential election by a landslide picking up more than 50 percent of the vote.

A self-described nationalist leader who hails from the southern state of Tabasco and is a former mayor of Mexico City, AMLO twice ran unsuccessfully for the presidency in 2006 and 2012.

“AMLO’s election is a seismic shift in Mexico that cannot be understated,” said Jason Marczak, director of the Atlantic Council’s Adrienne Arsht Latin America Center. From 1929 to 2000, Mexico was ruled by one party—the PRI (Institutional Revolutionary Party)—and since then by presidents from one of two mainstream political parties, the PRI and the conservative National Action Party (PAN).

Social reform—particularly tackling the scourge of corruption and violence—is a key priority for AMLO.

Trump tweeted his congratulations to AMLO and said he looks “very much forward to working with him.”

“AMLO is a nationalist who believes in the greatness of Mexico,” said Marczak. He “would not shirk in responding to any actions taken by the US government that he sees as detrimental to the future of Mexico.”

Marczak: President-elect Andrés Manuel López Obrador is a former mayor of Mexico City who has now run for the presidency three times, being victorious in his third run. He is originally from the southern state of Tabasco. Growing up in Tabasco is what helped to inform his political career. He lived the life of what many people refer to as the “Two Mexicos.” He saw firsthand the great divide between northern and southern Mexico and the great inequality that exists on both sides of the country.

He had a message of reducing inequality and fighting for the poor and those who have been generally left behind. In his victory speech last night, he said he will always govern for “the good of all; first the poor.”

About 50 percent of the results have come in at this point and have him winning about 54 percent of the vote, nearly double the voting percent of the second-place finisher Ricardo Anaya [of the PAN]. He was leading by double digits the entire campaign.

AMLO’s supporters don’t just see him as a political candidate or a politician, but as someone who is one with them. He has messianic status among his supporters; they see him as speaking for those who do not have a voice.

AMLO’s election is a seismic shift in Mexico that cannot be understated. The PRI ran Mexico until 2000 and since then the PRI and PAN have both ruled at a presidential level. AMLO was a member of PRD—the Democratic Revolution Party. He split from that party and formed Morena. Now you have the president of Mexico coming from outside the traditional political parties. It is a rejection by the Mexican people—as we have seen in countries across the world—of the political establishment and of the traditional way of doing things.

The PRI only mustered 15 percent of the vote in the presidential election and also appears to be set for historic defeats in both the Senate and the Chamber of Deputies, each of which had elections on July 1.

Q: AMLO’s critics have compared him to Hugo Chavez. Is that a fair comparison?

AMLO’s rise is also due to citizens saying basta (enough). Corruption has always been pervasive, but now people have awoken to the ills of corruption. The most serious effects of a siphoning of state resources are felt by those who have the least, the many people who AMLO has said he will fight for.

Q: What can Mexico expect from an AMLO presidency?

Marczak: AMLO will be a different president for Mexico with a different set of priorities from previous governments. He will seek to take Mexico in a new direction, not just domestically but with its foreign policy as well. He also recognizes that investment is critical for implementing many of the social reforms that he wants to put in place.

Q: US President Donald J. Trump has threatened to withdraw from the North American Free Trade Agreement (NAFTA), imposed tariffs on Mexican steel and aluminum, and taken a tough stand on immigration. To what extent was Trump a factor in the Mexican election?

Marczak: Trump was not a factor in this election. This election was about Mexico and its destiny. It was about people’s frustration with the current way of doing business in Mexico. The United States was mentioned once in President-elect López Obrador’s victory speech last night. He said that he would seek to carve out a relationship based on friendship and cooperation, but also based on mutual respect and that he would work to defend Mexican migrants who live in the United States.

President Trump sent a tweet as well in which he congratulated AMLO on his victory and said he looked forward to working with him.

Q: What is AMLO’s position on NAFTA?

Marczak: AMLO has said throughout the campaign as well as through his advisers that he will seek a quick completion of the NAFTA modernization talks. AMLO’s priorities on NAFTA are not hugely different from the priorities that the Peña Nieto government has been pushing for in negotiations. Obviously, there are some tweaks. But we will not be starting over again with an AMLO government. My understanding is that there is pretty good communication between the Peña Nieto and AMLO teams and there will be a seamless transition on the Mexican side.

Q: What does AMLO’s victory mean for the US-Mexico relationship?

Marczak: AMLO is a nationalist who believes in the greatness of Mexico. He will look to work with the United States when it makes sense for Mexico. He prefers cooperation. When President Trump imposed the steel and aluminum tariffs, AMLO’s message was Mexico should have been sitting down with the United States more often so that things didn’t get to this point. But AMLO would not shirk in responding to any actions taken by the US government that he sees as detrimental to the future of Mexico.