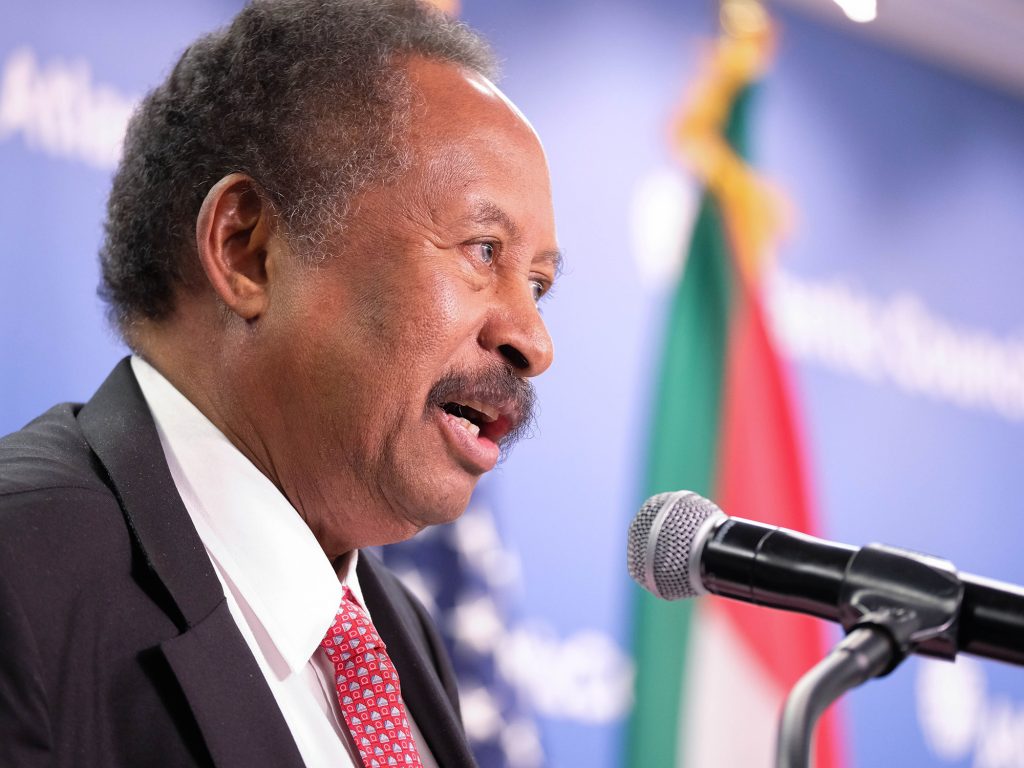 Hamdok took office on August 21 as part of a power-sharing deal between Sudan’s armed forces and the Forces of Freedom and Change (FFC)—a group representing pro-democracy protesters. Waves of demonstrations in early 2019 against former president Omar al-Bashir, who had ruled the country through repression for thirty years, culminated in the president’s removal by the armed forces on April 11. The military initially intended to govern the country for a two-year period, but intense protests—and a violent massacre of more than one hundred demonstrators on June 3—forced the military leadership into the agreement with the FFC.

Hamdok’s visit to Washington was met with the announcement that the United States and Sudan normalized diplomatic relations through an exchange of ambassadors for the first time in twenty-three years. The United States and many other Western countries had isolated the Bashir regime for its support of terrorism, specifically its sheltering of former al-Qaeda leader Osama bin Laden from 1991 to 1996, as well as its flagrant violations of the human rights of its citizens, especially in the Darfur region. US Secretary of State Mike Pompeo said the exchange of ambassadors was justified because Hamdok’s government “has demonstrated a commitment to peace negotiations with armed opposition groups, established a commission of inquiry to investigate violence against protesters, and committed to holding democratic elections.” Hamdok said the decision will “provide huge opportunities for cooperation between our two nations and we will be delighted to take it to new heights.” The prime minister did not, however, receive a clear indication of when Washington would remove Sudan from its list of state sponsors of terrorism, which forces certain financial sanctions as well as restrictions on foreign aid.

Hamdok said that his government’s “top priority is to stop the war and build the foundation of sustainable peace.” As it has been for much of the last sixty years, the Sudanese government has been fighting armed rebel groups in several conflict zones. Hamdok’s first trip as prime minister was to Juba, the capital of South Sudan, which declared independence from Sudan in 2011. There Hamdok met with representatives from major Sudanese rebel groups and held “very fruitful exchanges,” he said. The prime minister expressed his appreciation for President Salva Kiir’s efforts to facilitate talks with armed groups in the north and, in turn, offered to assist with discussions between South Sudan’s warring factions to help bring peace to the young nation. The prime minister maintained that he is confident that it would be “only a matter of time before we should be able to reach an agreement” for peace. He also affirmed that “South Sudan’s independence cannot and should not be compromised,” and expressed hope that both governments can transform “borders of conflict and misery to borders of peace, prosperity, and development.”

In addition to achieving peace, Hamdok said the transitional government is focused on stabilizing Sudan’s “bankrupt economy,” eradicating corruption, building state institutions, and increasing social development. He noted the efforts made to reconcile the country’s non-Muslim population and increase female participation in politics, which led to two women being appointed to the country’s Sovereign Council, including one Coptic Christian. Most importantly, he promised that his government is working toward the ultimate goal of holding “free and fair elections” and hosting a “constitutional conference which would allow the entire nation an opportunity to address its problems of identity [and] politics…and agree on a constitution.”

Despite Hamdok’s initial successes, many remain concerned by the influence of the Sudanese armed forces in the transitional government, especially after the deadly June 3 attack on protestors that precipitated the power-sharing agreement. Hamdok assured that “transitional justice is firmly linked to the peace process. We are not going to rest until we see that justice has been served…to the best and maximum satisfaction of the victim.”

Hamdok stressed that the removal of Sudan from the list of the states sponsoring terrorism was vital for his government’s success in implementing needed reforms, linking it specifically to jumpstarting investment and tackling Sudan’s high public sector debt, “but also opening the country writ large.” He further asked that the international community continue to be involved in helping Sudan navigate the peace process, including providing “political and technical support” as well as financing “post conflict development” for conflict regions.

Hamdok conceded that after the revolution which saw Bashir toppled, the Sudanese people “have very high expectations” for his government. “We are thinking on our feet,” he joked as they try to navigate the country to a new future of democracy and peace. He hoped that with serious reforms and careful planning, Sudan can “create an environment that would give hope to our younger generation.” He promised that “Sudan will never be the same again.”

Thus far, the prime minister has done a poor job of managing the outsized expectations of his people to be out from under Washington’s punitive regime. Many will surely be disappointed when and if he returns home without one of these large deliverables, but Hamdok need not leave Washington empty-handed.

Until there is greater clarity on how the Sovereign Council will function, how it will relate to the prime minister and his Council of Ministers, and what the duties, responsibilities, and authorities of the Legislative Council will be, the agreement will remain little more than words on a page.

At this perilous moment, where there is an opportunity for the Trump administration to summon years of built up leverage to ensure a lasting transition to democratic rule and regional stability in Sudan, will Washington answer the call?