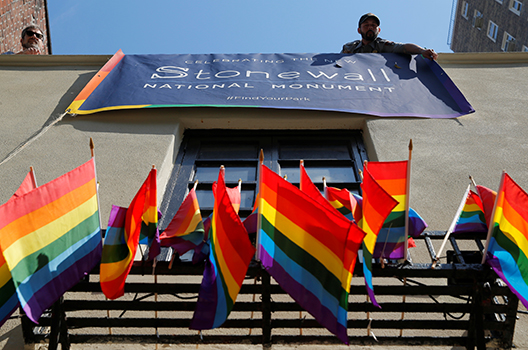 This year marks the 50th anniversary of the Stonewall riots, which opened an important chapter in efforts to dismantle gender- and sex-based discrimination. In the summer of 1969, as demonstrators took to the streets in New York to protest a police raid on a local gay bar, their voices joined past US activists who in similar ways strove to affirm human dignity and fundamental human rights. This work on behalf of social justice continues in acts of solidarity with victims of sexual abuse, immigrants, the unjustly incarcerated, and all who have lost their lives as a result of senseless violence and religion-based bigotry, including anti-Semitism, Islamophobia, and the bombing of Christian churches.

The annual Pride events throughout the United States each year offer an opportunity to honor past heroes and celebrate the progress that the LGBTI global community has achieved. But there are still far too many people who lack the kind of access to safe spaces and freedoms so many LGBTI persons often take for granted. A significant part of this population still wrestles with shame-based trauma and the familial and professional fears associated with living in the closet. And far too many LGBTI persons still face life-threatening circumstances.

Forty percent of homeless US youth identify as LGBTI.  Adding insult to injury, not only do these young men and women find themselves homeless as a result of familial and social indifference, many—especially those of Native American, Black, and [email protected] descent— also end up in prison. Even though the country has witnessed significant changes in public opinion regarding gay rights and the legalization of same-sex marriage, a majority of states (thirty) still lack laws protecting individuals on the basis of sexual orientation and gender identity.

On the global front, many advances have been achieved in securing human rights for members of the LGBTI communities. Criminalization of homosexuality has declined throughout the world, even if pockets can still be found on every continent where this trend has not taken hold. Decriminalization, however, is only the first step toward lasting change. As the International Lesbian, Gay, Bisexual, Trans and Intersex Association (ILGA) state-sponsored report on homophobia points out, “while the trend of decriminalization is encouraging and worth celebrating, decriminalization as a formal legal change does not in and of itself lead necessarily to effective social change. Indeed, the removal of formal legal provisions does not always or immediately translate to improvements in the lived experiences of gender and sexual minorities.”

Education has an indispensable role in creating more inclusive and just societies that address issues of gender and human sexuality. Sadly, the groundbreaking contribution of critical thinkers that has come to be known as “queer theory” remains widely unknown, unengaged, and often misrepresented in the public square. In some ways this invisibility can be attributed to the failure of scholars themselves to make highly specialized concepts in the fields of gender studies, psychology, philosophy, sociology, and theology more accessible. At other times, misrepresentation of their ideas as dangerous to traditional family values has led some to dismiss their contributions altogether. Intellectuals like Michel Foucault, Jacques Lacan, Simone Beauvoir, Teresa de Laurentis, Judith Butler, Audre Lorde, Eve Sedgwick, and Marcella Althaus-Reid, to name but a few, are not the kind of household names that ordinarily come to mind when we think of engaging the legacy of Stonewall and consider current strategies that might help further advance the fundamental human rights of LGBTI persons. That said, it is hard to imagine long-term success in efforts to reject human indifference, create authentic cultural encounters, and birth more inclusive communities without seriously engaging and making more widely available the arguments set forth by these intellectual trailblazers.

Seeing the world through queer critical eyes is above all an invitation to occupy a different place in the landscape from which to engage one another. This perspective rejects essentialist understandings of the self (one shoe fits all), opting instead for a dynamic, fluid, and complex understanding of what it means to be human. It questions the construction of binaries (gay/straight, black/white, male/female) and underscores how particular contexts shape and impact human relations and notions of the embodied sexual subject. The queer eye challenges existing power structures that have often been used to marginalize and oppress LGBTI persons.  Above all, the queer eye invites women and men of good will to consider the manifold and interrelated ways that heteronormativity pervades our daily life experiences, creates a “straight” and normative lens from which to judge human relations, and sets forth unnatural and unjust relational expectations for queer persons and communities that end up causing much pain and suffering.

As we commemorate the 50th anniversary of Stonewall, one way to honor the memory of the brave men and women who risked their lives and took to the streets is to continue to raise awareness of the manifold forms of oppression LGBTI persons face on a daily basis. Clearly, without the street activism of Stonewall many would not be alive today. We can honor this past painful and yet liberating action by joining queer thinkers and educators in raising critical questions that will help society unmask and challenge the systemic marginalization of LGBTI persons. Embracing street activism and intellectual activism will contribute to perfecting our union and advance global efforts to achieve more just and inclusive human relations.

Miguel H. Díaz is the John Courtney Murray University Chair in Public Service at Loyola University Chicago. He is also a former US ambassador to the Holy See.

Image: A member of the National Park Service adjusts a banner on the front of The Stonewall Inn ahead of a ceremony officially designating it and Christopher Park as part of the Stonewall National Monument in the Manhattan borough of New York, U.S., June 27, 2016. (REUTERS/Andrew Kelly)