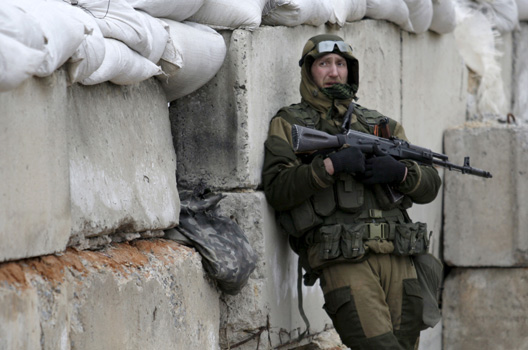 European sanctions on Russia cannot be eased until Moscow fulfils commitments it made under the Minsk agreements to pull its troops and weaponry out of eastern Ukraine and Ukrainian control of its state borders is restored.

Despite persistent Russian denials, regular Russian troops remain in Donbas and Moscow continues to provide military equipment and training to the separatists in eastern Ukraine.

On our visit to Kyiv in February, we delivered a clear message: Russian aggression in Ukraine must stop and Russia must return Crimea and Sevastopol to Ukraine.

The world’s attention today has turned to Syria and other related crises, but no matter how grave those situations they must not draw us away from Crimea and eastern Ukraine. It is unacceptable that military force, deception, and disinformation is used to change borders in Europe in the twenty-first century. Indeed, this is in direct contravention of the fundamental principles of the European security order laid down in the Charter of Paris for a New Europe and the Helsinki Final Act.

Ukraine, as any other sovereign nation, has the right to make her own foreign and security policy choices, and to retain the integrity of her own territory. We cannot accept that another country interferes with that right.

Sweden and Lithuania have different historical experiences demonstrated through different choices in security policy—Sweden as a militarily nonaligned state and Lithuania as a NATO member. With that fact, we both build our security in cooperation with others, with respect for the choices made by others, and with respect for international law. This is manifested in our close cooperation with our Nordic and Baltic neighbors, the European Union and NATO partners, the United Nations, and the United States within the framework of strengthening the transatlantic link.

We cannot remain passive when Russia decides to undermine the security order, which has been established over the last twenty-five years, by seizing the territory of a neighboring state. Russia clearly seeks to establish another security order where great powers divide Europe in spheres of interest. This is disturbing as we believe in international law where all states have a right of self-determination.

We must avoid a situation where existing international norms and principles are allowed to be watered down. We should also withstand any attempts at new “grand deals” on European security. This is not the time to rebalance the concept of comprehensive security. Respect for the UN Charter, the Statute of the Council of Europe, and the OSCE principles, norms, and commitments, including democracy, human rights, and the rule of law are at the core of a predictable, rules-based European security order. If we give up on these basic principles now we will eventually have less, not more, security.

Even as other urgent security issues arise on our agenda we cannot accept what Russia has done in Ukraine. Russia’s illegal annexation of Crimea and its involvement in eastern Ukraine remain the greatest challenge to the European security order.

Image: A member of the self-proclaimed Donetsk People’s Republic forces stands guard at a checkpoint at the frontline with the Ukrainian armed forces near the town of Avdiivka, outside Donetsk, Ukraine, on March 17. (Reuters/Alexander Ermochenko)