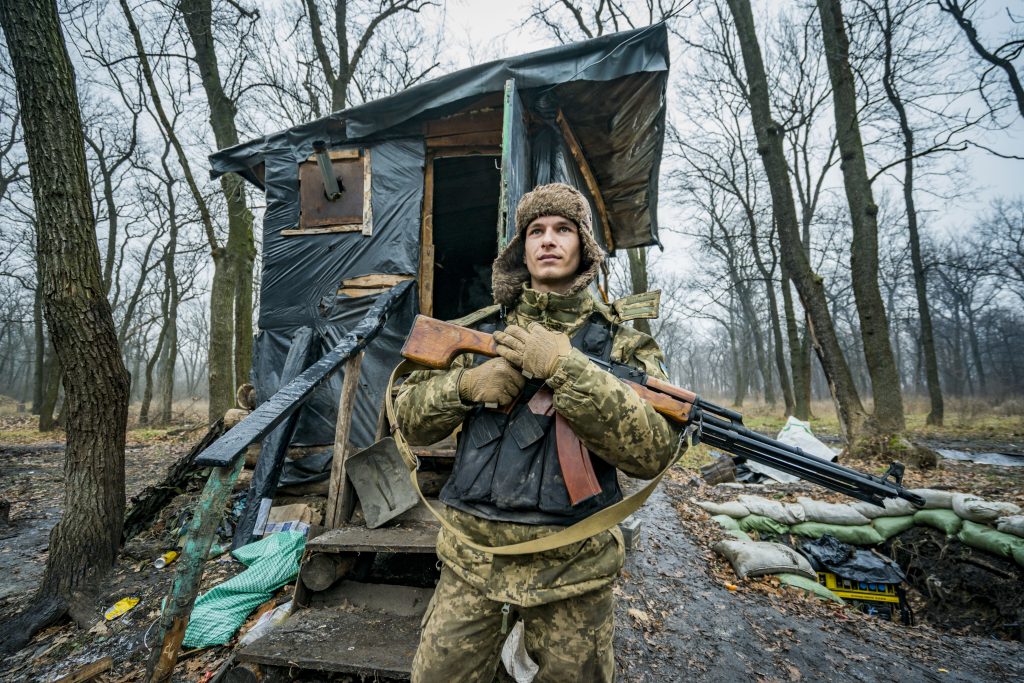 Fierce fighting in Donetsk despite the onset of winter

Support of Ukraine continues from the US, EU, and elsewhere

Fierce fighting in Donetsk despite the onset of winter

The situation in Donetsk continues to be among the most difficult on the frontlines in Ukraine. With the onset of winter in Ukraine and the first snowfalls in the area, the fighting becomes even more complicated and heavy for both sides. Ukrainian defenders in Bakhmut continue to resist regular Russian artillery attacks and attempts to breach the defensive line. Both sides have claimed the fighting will continue despite previous analysis suggesting that winter will see a temporary halting of clashes. The DFRLab previously discussed this scenario, as both Russia and Ukraine are pushing for gains on the frontlines.

Fighting and artillery shelling in greater Bakhmut are so intense that all buildings have been reportedly damaged in places like Ivanhrad and Opytne, south of the city. Given the fierceness of the fighting, the Ukrainian army is using all the resources it can spare on the Bakhmut front, including a self-made self-propelled gun created from an MT-LB armored fighting vehicle and an MT-12 Rapira anti-tank gun.

On the Russian side, the DPR’s 11th regiment infantry is continuing to fight in Pervomaiske, Donetsk Oblast. Ukrainian forces remain stationed in the settlement. According to Russian sources, fighting has been difficult given the current strength of the Ukrainian army, which has equipped local basements to turn them into a series of ambush points. From Pervomaiske, Ukrainian artillery periodically fires at the positions of the infamous Somalia Battalion of DPR and the 11th regiment near the village of Pisky.

Readers should recall that fighters from the Wagner Group, supported by 1st and 2nd Army Corps, are almost entirely responsible for pushing the offensives in Donetsk, particularly around Bakhmut and the western parts of Donetsk. Wagner units remain active in Soledar as well, fighting Ukrainian forces with variable success. Meanwhile, a member of the unit reportedly deserted and returned to Russia, where he recorded a video message addressed to Russian President Vladimir Putin. In the video, he said the unit carried out extrajudicial executions, and the soldiers themselves were sent out to fight “with machine guns against tanks.” The deserter was reportedly arrested.

Internal criticism has not been limited to Wagner units. Telegram channels that gained enormous popularity alongside Russia’s involvement in the Syrian civil war and the invasion of Ukraine, have been particularly critical of the military elite. On December 13, Rybar, one of the most well-known military-linked channels, published a critique against so-called photo reports that attempted to show the bright side of the military, while problems inside the army remain unresolved.

While the front line in Donetsk presents a serious obstacle for the Russian army, Moscow appears to be building defensive lines in sensitive locations. The Russian army continues to strengthen positions along the border with Ukraine, in the Belgorod region, as well as in occupied Crimea. Russian forces are strengthening the coast near the village of Molochne, possibly fearing Ukrainian attacks in the area. They have also installed a network of mine barriers and trenches along the Crimean coast. Accordingly to local reports, Russian forces are even recruiting construction workers to dig trenches in Belgorod, Zaporizhzhia, and Luhansk, offering up to 250,000 rubles (around $3,900 USD) as payment. This hiring campaign coincides with recent reports regarding the construction of defensive lines in Crimea, Melitopol, and Belgorod.

Oleksiy Gromov, Deputy Chief of the Main Operational Directorate of the General Staff of the Armed Forces of Ukraine, said that Ukrainian soldiers advanced 1.5 kilometers near the village of Dibrova in the Luhansk Oblast, pressuring Russian forces in the area. Earlier, Gromov stated that Russian MiG-31K fighters capable of carrying Kinzhal missiles had returned to Belarus, along with an A-50U airborne early warning and control aircraft. This increases the capabilities of the Russian Aerospace Forces to carry out missile strikes against Ukraine’s critical infrastructure from the territory of Belarus.

Back in Russia, Telegram channels circulated a claim on December 11 that Chief of the General Staff Army General Valery Gerasimov may soon be replaced. The Kremlin denied Gerasimov’s resignation or replacement, and called the claims a Ukrainian “fake.”

Support of Ukraine continues from the US, EU, and elsewhere

Five Russian citizens living in the United States were charged with illegally supplying electronics to the Russian armed forces, according to an FBI investigation. One of the accused, alleged FSB officer Vadim Konoshchenko, was detained in Estonia on December 6 and is awaiting extradition to the United States. The rest of the defendants in the case remain at large, the FBI said. If found guilty, the defendants face up to thirty years in prison.

Meanwhile, the EU agreed on its ninth sanctions package targeting the Russian economy. Sanctions include a ban on imports of drones to the Russian Federation, as well as other dual-use goods, stricter sanctions on banks, the mining and energy sector, and the banning of a number of propaganda channels. The European Parliament also recognize the Soviet-era Holodomor, in which Stalin starved the Ukrainian population, as genocide.

Poland recognized Russia as a sponsor of terrorism and also held Russia responsible for the 2010 crash of the presidential plane that killed Polish President Lech Kaczynski, as well as members of the government and the army.

Germany transferred more military aid to Ukraine, including Iris-T missiles, two armored recovery vehicles, 30,000 40mm shells, 5,000 155mm shells, four ambulances, and eight trucks with 8×8 drive. Germany is also building a new ammunition factory that, according to Ukraine’s Ministry of Defense, will produce ammunition for Gepard anti-aircraft guns, which will then be transferred to Ukraine.

The United States announced it will increase the number of its instructors for Ukraine’s soldiers undergoing training in Germany. In the near future, 600-800 fighters will be trained simultaneously, up from the current level of 300 trainees. The US is also considering the possibility of transferring to Ukraine JDAM systems, which turn an ordinary aerial bomb into a “smart bomb” with the help of GPS sensors and additional tail stabilizers.

The Armed Forces of Ukraine also reportedly received 120mm HE-843B mortar bombs from Sudan, despite Sudan’s recent relations with the Kremlin. This was reported by Ukraine Weapons Tracker analysts. Aircraft tracker Gerjon reported that two Ukraine International Airlines aircraft have made at least fifteen flights between Sudan and Poland’s Rzeszów.

Poland also hosted the Ukrainian-Israeli Innovation Summit 2022, where Israel shared its experience in building houses in special conditions. Ambassador of Ukraine to Israel Mikhail Brodsky emphasized that 200 Ukrainian specialists have already visited Israel and another 800 have attended online trainings.