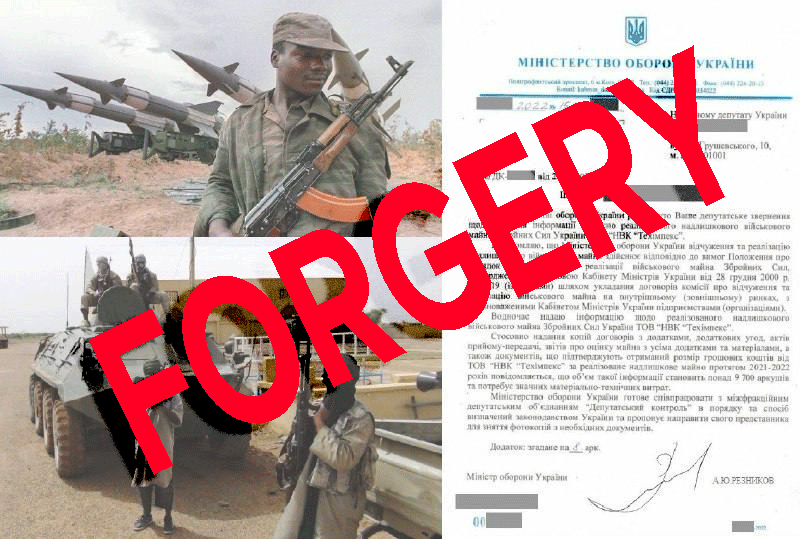 Putin declares victory in Mariupol despite inability to capture steelworks

On April 19, the Kremlin-tied Telegram channel Rezident published a forged document claiming that Ukraine was selling surplus weapons to African countries. The letter, dated March 29, was purported to be written by the Ministry of Defense in response to a request from a member of Ukrainian parliament. The letter cites Amendment Number 1919 from the Decree of the Cabinet of Ministers of Ukraine, introduced in 2001, which allows the ministry to sell surplus weapons to other nations. The Telegram post alleged that Ukraine planned to sell armored cars, tanks, submachine guns, rifles, grenades, and bulletproof vests to African countries – “Everything that is so lacking on the front line,” the channel stated.

The letter also claimed that the company NVK Techimpex was responsible for selling the surplus weapons, citing a supposedly 970-page document that outlines the deal. The document was not included in the post.

While the letterhead is an exact copy of official defense ministry documents, the signature of Defense Minister Oleksii Reznikov differs from his usual signature. In addition, the document states the readiness of the ministry to cooperate with “Deputy Control,” a defunct deputy association in the Ukrainian parliament that existed from 2014 to 2019; its Facebook page was last active in January 2018. Further, the document features Reznikov’s initials written in Russian rather than Ukrainian. The document displays the initials “А.Ю.,” which is correct in Russian, but in Ukrainian the initials should read “О.Ю.” This suggests a Russian speaker forged the letter.

The document was posted as part of a composite image alongside two other pictures – one of an Angolan soldier in 1988 and the other of members of the Movement for Unity and Jihad in West Africa (MUJWA). The Telegram channel Rezident posted the composite image with a caption that said, “While Ukrainian soldiers are dying due to the absence of weaponry, clerks from the Ministry of Defense are selling it under the premise of redundancy.” The channel called the alleged sale a “cunning scheme of enrichment.”

The day after the post, Rezident cited “rumors” to claim that Ukrainian President Volodymyr Zelenskyy was infuriated by the weapons sales.

Putin declares victory in Mariupol despite inability to capture steelworks

On April 21, Russian Defense Minister Sergei Shoigu briefed President Vladimir Putin on the situation in Ukraine. Shoigu reported that Russian troops had taken control of Mariupol, save for the territory of the Azovstal steelworks, where Russian armed forces have besieged more than 2,000 members of the Azov battalion. According to the Telegraph, “The Azovstal factory has been described as a ‘city under a city’ because of its vast network of underground shelters and tunnels.”

Putin congratulated Shoigu for successfully liberating Mariupol and placing it under Russian control. He ordered Shoigu to stop the assault on the Azovstal steel plant and instructed him to block the Azovstal industrial zone “so that even a fly cannot pass through.”

Shoigu did not mention that Ukrainian civilians are also hiding within the Azovstal compound. On April 19, Eduard Basurin, spokesman for the self-proclaimed Donetsk People’s Republic militia, claimed that Ukraine was lying about the presence of civilians within the Azovstal factory grounds. However Ukrainian Deputy Prime Minister Iryna Vereshchuk said on April 21 that up to 1,000 civilians were in hiding at the factory.

BBC Russia suggested three possible explanations for why Putin commanded Shoigu not to storm the Azovstal plant. First, Azovstal is a heavily fortified area, meaning the assault could last weeks, with potential losses for the Russian forces and no guaranteed victory. Second, Putin may want to achieve at least a partial victory by Victory Day celebrations on May 9 marking Russia’s victory over Nazi forces in 1945; he could be planning to announce the success of the “military operation” in Ukraine that day. Third, Azovstal is one of the largest metallurgical plants in Europe, so Russia may want to capture the plant for future use without inflicting too much damage.

Rosaviatsiya, Russia’s Federal Air Transport Agency, recommended that airlines prepare for flights that will not be dependent on the Global Positioning System (GPS), the US government global navigation service. The pro-Kremlin outlet iz.ru claimed that the recommendations is connected with the system’s possible shutdown in Russia, as well as the threat of GPS jamming and spoofing when flying in Russia’s Kaliningrad region, over the Black Sea, east of Finland, and over the Mediterranean.

According to iz.ru, the European aviation regulator had previously warned about possible navigation system failures, which could lead an aircraft to deviate from routes and no longer perform safe landing procedures. Rosaviatsiya advised Russian pilots to “immediately inform air traffic controllers of glitches, degradation and abnormal performance of GPS.” The airlines were recommended to prepare their summer flights for these contingencies.

Earlier, Russian outlets reported that the United States might consider disconnecting Russia from the GPS navigation system as part of its sanctions targeting Russia. On March 19, Dmitry Rogozin, head of Russian space corporation Roscosmos, stated that such a possibility existed, but it would be technically very difficult “since the GPS orbital constellation cannot be selectively switched off in the direction of Russia.” Rogozin noted that Russia’s GLONASS navigation system would still ensure the global accuracy of airline navigation.

At the time of writing, the Kremlin had not commented on Rosaviatsiya’s recommendation to abandon GPS.