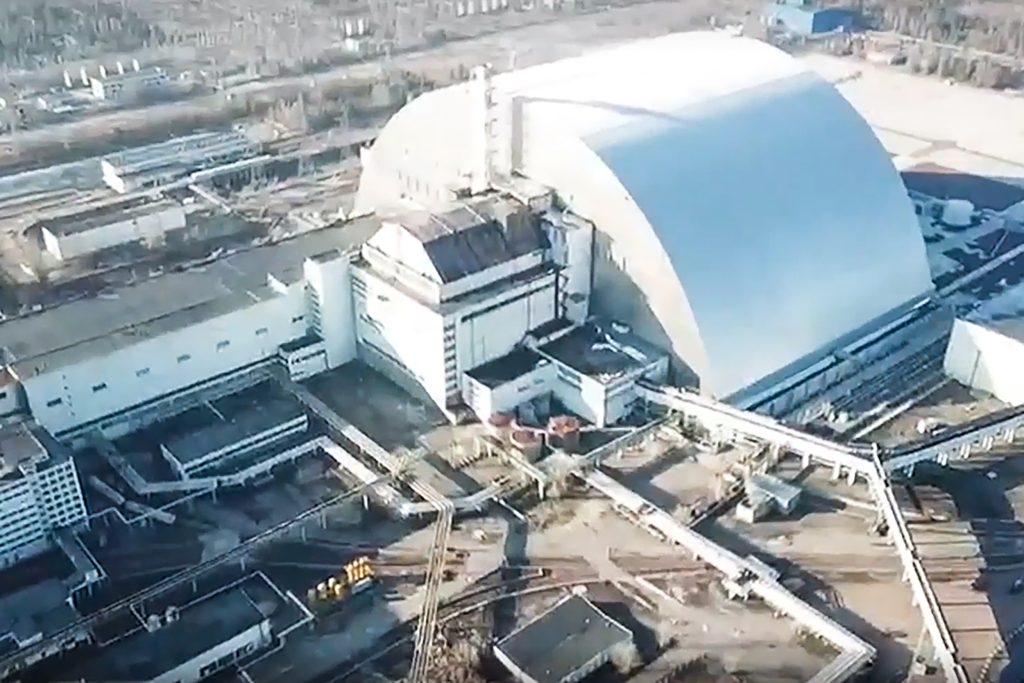 Visual evidence of Russian attacks on Ukrainian cities and civilians

In remarks to Russian media on March 9, Foreign Ministry spokesperson Maria Zakharova escalated Kremlin claims that Ukraine intended to use nuclear or biological weapons against Russia. According to the Foreign Ministry Twitter account, Zakharova said that Russia decided to capture the Chernobyl and Zaporizhzhia nuclear power plants “exclusively to prevent any attempts to stage nuclear provocations, which is a risk that obviously exists.”

Meanwhile, Zakharova went on to “confirm” that Russian special forces had collected proof that Ukraine and the US Department of Defense attempted to destroy evidence of a biological weapons program at the start of the Russian invasion. “We confirm that the special military operation in Ukraine revealed facts of the emergency eradication by the Kiev regime of traces of the military biological program implemented by Kiev with funding from the US @DeptofDefense,” the Foreign Ministry Twitter account quoted her as saying. Zakharova’s remarks reinforced claims made by Russia’s Defense Ministry on March 6.

The Russian Ministry of Defense Telegram channel released a set of documents on March 9 it claims is “proof” that Ukraine intended to stage an invasion of the Donbas region. The documents, which were amplified by the Foreign Ministry Telegram channel, TASS and elsewhere, were “acquired” by a Russian special operation, according to MoD spokesman Major General Igor Konashenkov. He described them as “the original secret order of the Commander of the National Guard of Ukraine, Colonel General Mykola Balan, dated January 22, 2022,” adding, “The document contains the original signatures of the officials responsible for the fulfillment of the tasks of the command of the National Guard of Ukraine.”

In response, the National Guard of Ukraine told Ukrainian fact-checking outlet StopFake that the documents released by Russia had nothing to do with the Donbas and instead discussed annual training exercises near Lviv. They also added that the stamps and signatures affixed to the top of the documents do not match the procedures used to mark a document as secret.

Today’s document release is the latest in a series of unverifiable or debunked claims used by the Kremlin to justify its invasion of Ukraine. The Kremlin has a history of utilizing forged documents to support its interests.

Unverified allegations that Russian President Vladimir Putin has cancer were prominently displayed on the March 6 cover of British tabloid The Daily Star. The article comes after other UK outlets such as The Telegraph, The Sun, Yorkshire Post, and Meaww.com reported that Putin is seriously ill with cancer, often citing non-medical experts. Previously, Putin’s spokesman Dmitry Peskov dismissed claims that Putin had health issues.

In an article titled “Vladimir Putin ‘dying in agony from terminal cancer’ and pics show his pain, say sources,” The Daily Star cited an unnamed “ex-military intelligence officer now working at the Pentagon” who said, “In the past, we have seen him [Putin] smile, but in 2022 there are few pictures of him looking happy. His look suggests he is in pain and our people suggest his angry look is most likely as a result of him being in agony. Our people are confident he is ill – he is concerned about Covid as he keeps his staff at a distance.”

The article went on to quote former UK Foreign Secretary Lord David Owen, who claimed on Times Radio that Putin’s face shape had changed as a result of using steroids. Lord Owen made similar comments on BBC Newsnight, claiming that Putin is using steroids that increase aggression and reduce immunity, citing this as an explanation for Putin’s fear of COVID-19.

The Sun and Meaww.com cited political scientist Valery Solovei, the former head of the public relations department at the Moscow State Institute of International Relations, who reportedly said, “Putin is suffering from cancer along with Parkinson’s disease.” Meanwhile, Yorkshire Post’s article was based on comments from retired Rear Admiral Chris Parry, who claimed that Putin was in a rush to invade Ukraine because he may have cancer. “He has been using these very long tables to interview people. I think his immune system might be suppressed at the moment,” Parry added.

Many other English–language tabloids amplified allegations that Putin has cancer, based on the Daily Star’s article. Since March 2, social media accounts on Facebook and Twitter have also spread the rumor.

Visual evidence of Russian attacks on Ukrainian cities and civilians

Russian indirect fire continues to impact civilian population centers all throughout Ukraine. The DFRLab put together a map of documented and geolocated imagery relating to the indiscriminate shelling of Kharkiv, Ukraine’s second largest city. The map showcases artillery impacts or related damage caused throughout the span of seven days. Individual points are grouped by day, and contain links to the imagery that was geolocated. Viewers are warned that some footage may at times be graphic.

On March 8, the DFRLab geolocated a video which was published to a popular Russian war correspondent channel, which showed Russian national guard troops firing mortars on the outskirts of Kharkiv. On the same day, video evidence emerged from the outskirts of Kyiv, showing a Russian BMP-2 infantry fighting vehicle attacking a civilian vehicle unprovoked. The attack killed the driver.

On March 7, Israeli media reported that a wave of defections and resignations prevented the Belarusian military from invading Ukraine alongside Russian forces. The report cited Belarusian opposition leaders in exile, who said the plan to invade Ukraine was disrupted when several military officers resigned and fled to the neighboring countries, including Russia, Kazakhstan, and the Baltic states, to avoid military service.

Despite these reports, the Ukrainian Armed Forces warned on March 8 that Belarusian troops could directly attack Ukraine, saying, “The possibility of large-scale involvement of Belarus in the war on the side of Russia still persists.”

Russian access to the global internet is increasingly imperiled. On March 8, Lumen—one of the world’s largest internet backbone companies, headquartered in the US—announced that it would end all business relationships in Russia. Between this and a similar termination announcement from Cogent Communications last week, Russians are quickly losing access to any internet infrastructure that is not under the control of the Russian government.

At the same time, Cloudflare—a US-based company that provides protection against distributed denial of service (DDoS) attacks—announced that it would continue to operate its services in Russia. Cloudflare CEO Matthew Prince emphasized that Cloudflare had terminated services for all entities sanctioned by the US government, but that the company would continue to support internet access for Russian citizens, citing a “dramatic” increase in Russian network requests to worldwide media as Russians seek information about their country’s actions. Cloudflare’s decision comes after an intensive lobbying effort by the Ukrainian government to remove Russia from its services entirely.

Finally, Twitch, a videogame streaming platform, and OnlyFans, an adult content platform, each announced that they will withhold payments from Russian content creators. This development was made almost inevitable by previous service suspension decisions by Mastercard, Visa, and most recently PayPal, upon whose payment systems Twitch and OnlyFans heavily rely. Twitch is particularly popular in Russia. Most prominent Russian Twitch celebrities have either expressed opposition to the invasion or refused to comment on it, while some are in the process of fleeing the country.

On March 7, Instagram took down a coordinated network of several accounts masquerading as city news portals for seven Polish cities. The accounts had similar logos and names, each including the name of a Polish city. Among those identified were Bydgoszcz_online, Kielce_online, Krakow_online, Rzeszow_online, Lublin_online, Katowice_online and Olsztyn_online. The oldest account, @kielce_online, was registered in October 2019, while other accounts were created in 2020. While these accounts previously published genuine stories about Polish cities, on March 6 they started publishing identical anti-Ukrainian and pro-Russian posts.

The DFRLab found screencaps of some of their posts on the Polish social network Wykop.pl. These posts spread false statements from police claiming that Ukrainian refugees in Poland had organized mass fights with Poles in different Polish cities, and that refugees from Ukraine committed over 780 crimes in Poland within the first ten days of the war. Other posts openly expressed support for Russia and accused Ukraine of plotting to destroy Europe using biological weapons.

Twitter user @gromotapl and Polish fact-checking portal Demagog verified the registration emails of these Instagram accounts and found that they were hosted on Russian domains.

On March 9, Fridon Injia, a pro-Kremlin member of Georgian Parliament, said Georgia should join the Russian payment system known as Mir. This comes after Visa and Mastercard said they would suspend operations in Russia. Injia claimed that joining Mir would increase Georgia’s gross domestic product and added that Ukraine is on a verge of collapse, noting that Russia has recognized the People’s Republics of Donestk and Luhansk as independent. Injia said these changes should prompt Georgia to consider strengthening its economy.

On March 7, Georgian Airways added MIR to its payment system. The head of the airline, Tamaz Gaiashvili, told Radio Free Europe that Georgian Airways is not participating in sanctions against Russia and will continue to offer direct flights to the country.

Image: PRIPYAT, UKRAINE  FEBRUARY, 2022: Pictured in this video screen grab is the Chernobyl Nuclear Power Plant. Russian Airborne troops and the Ukrainian National Guard are providing security at the nuclear power plant. An agreement has been reached with servicemen of a separate battalion of the National Guard of Ukraine to jointly provide security at the units, the confinement and the storage facility for spent nuclear fuel. Chernobyl Nuclear Power Plant staff continue to monitor the radiation levels and work at the nuclear power plant as normal. Video grab. Best possible quality. Russian Defence Ministry/TASS A STILL IMAGE FROM A VIDEO PROVIDED 26 FEBRUARY BY A THIRD PARTY. EDITORIAL USE ONLY.No use Russia.